Recently, a French physicist posted a picture online that he described as simply remarkable. The image, Étienne Klein said, was taken by the James Webb Space Telescope, the world’s newest and most powerful space observatory. It showed Proxima Centauri, a star about 4.2 light-years from us, our sun’s closest neighbor, Klein explained in his tweet. “This level of detail,” he said, the awe evident. “A new world is revealed day after day.”

By now you might have seen the picture, which went viral: a deep-red sphere suspended in inky darkness, its surface gently textured with bright spots. By now, you might also know the truth: That’s no star. It is sausage—a cross section of chorizo, to be precise. Klein’s Proxima Centauri was a prank, and thousands of people had fallen for it.

“According to contemporary cosmology, no object belonging to Spanish charcuterie exists anywhere but on Earth,” Klein said after fessing up.

His timing was impeccable. The temptation to spoof space-related wonder—and the impulse to marvel at any new image purporting to be a brand-new view on our universe—was at a peak. NASA and other space agencies had just spent weeks hyping the release of the Webb telescope’s first images. All astronomers could talk about was how good Webb was going to be, how it would capture the universe in unprecedented detail. In July, the first batch of Webb pictures was shared widely, and the public was primed for more, ready to retweet sparkly content in an environment where pretty space pictures aren’t likely to be scrutinized for accuracy. Plus, the image seemed to come from a trusted source, a blue-checked user, a research director at the very important-sounding Alternative Energies and Atomic Energy Commission, in France.

As far as misinformation goes, Klein’s joke was innocuous enough. And it was a pretty good joke. But like much viral misinformation, the space chorizo succeeded in part because it hit on an element of truth. There’s a reason so many of us were willing to buy into it, and it’s not NASA’s hype machine or the internet being the internet. The reality is that a lot of things in space actually resemble cured meats from afar. And the James Webb Space Telescope is going to show us them.

The telescope is designed to observe the infrared light coming from the most distant galaxies that existed just after the Big Bang. These deeper cuts, the farthest targets, will appear as fuzzy, red orbs. Fuzzy because, well, we’re looking 13 billion years back in time! Even Webb can’t resolve the detailed structures of the farthest galaxies. And they will be red because that’s the shade astronomers use to color the data, to convey the stretched-out nature of the longer wavelengths of the incoming light. Yes, Webb can capture closer-in galaxies in dazzling, almost unreal detail, every pixel twinkling; we’re in for more sights like the glimmering cliffs of the Carina Nebula and the shimmery spokes of the Cartwheel Galaxy. But we’re also about to get many more red blobs. Red blobs that, if you squint a little, might resemble a piece of chorizo.

Consider this recent Webb image, which astronomers were very excited about. Nothing about this blob can tell you that this is a distant galaxy that humankind has never detected before, that what you’re seeing is a collection of stars as they appeared just 300 billion years after the Big Bang, when the universe burst into being in one spectacular, mysterious moment. That this red blob is kind of a big deal.

It’s my job as a science journalist to explain this to others, to do what Klein did with the space chorizo: assign meaning, significance, and even wonder to a red blob. And often, conveying something of cosmic importance requires starting small, with familiar language. Many science journalists, myself included, have described inscrutable images of supermassive black holes as doughnuts, because they do look like doughnuts, and, unlike extremely complicated, mind-bending astrophysics, doughnuts are pretty accessible. The Webb picture of the fuzzy, distant galaxy felt to me like looking at a tomato before I put my contact lenses in, but perhaps if I wasn’t a pescetarian, I would have described it as a blurry slice of salami. All of this is to say, we’ve seen other, very real versions of the space chorizo before, and we’ve marveled at them in awe-dripped tones.

Just a few days after the space chorizo went viral, astronomers released this picture, which was processed using data from an Australian radio telescope. This is the aftermath of a supernova, the remnants of an exploded, burned-up star, somewhere between 10,000 and 15,000 light-years away. Doesn’t it look just like a meatball? 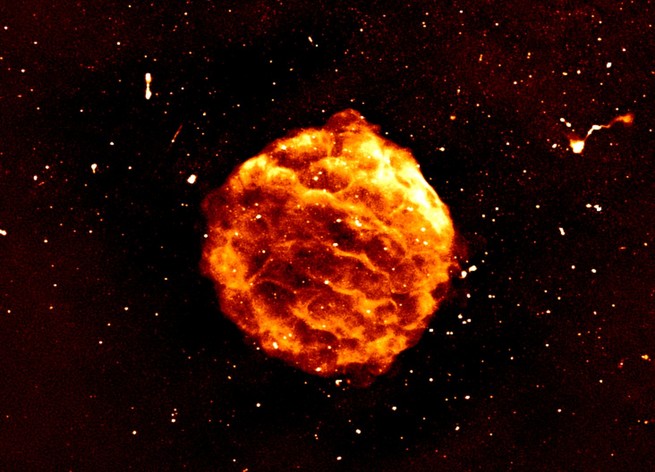 Even our own sun has resembled, in some perspectives, something you’d find on a charcuterie board. Here’s a composite image from the Solar Dynamics Observatory, a sun-studying NASA spacecraft, produced in 2012. That little black spot at the top left is the shadow of Venus, passing by in a rare cosmic alignment that won’t occur again until 2117. Pretty wild! But the whole thing also looks like a slice of pepperoni. 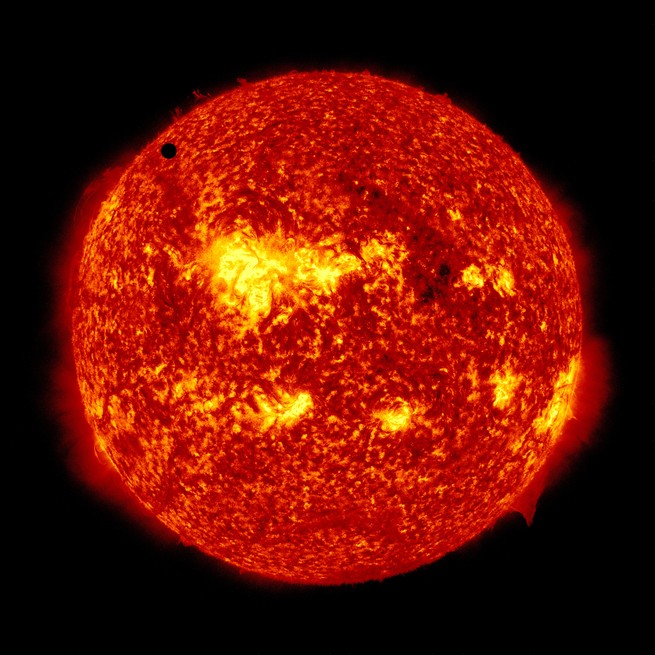 Many of Webb’s targets will be impossible to mistake for deli meats. The Proxima Centauri of Klein’s prank will appear distinctly starlike to Webb; bright and brilliant, the light diffracting into elegant spikes. But some celestial objects, particularly those distant galaxies that Webb was specially designed to detect, will look so red and spherical, so … chorizolike. Astronomers are well aware of what their thrilling space pictures can look like. “I can see why people fell for it,” Rohan Naidu, an astronomer at Harvard who is using Webb to discover distant galaxies (including the one that resembled a tomato), told me. “We’ve been selling them these red tomatoes too, no?”

Why Do Some Allergies Go Away While Others Don’t?

Losing amphibians may be tied to spikes in human malaria cases

Pterosaurs may have evolved from tiny, fast-running reptiles

The Climate Economy Is About to Explode

Why Don’t Grocery Stores Stock the Most American Fruit?