The open ocean is a veritable soup of tiny critters, including newborn fishes. It’s hard to learn about them, though, because they are mere millimeters long and semitransparent. When netted from research vessels, their delicate body parts may get mashed or removed. Now, a partnership between scientists and scuba divers is giving researchers fresh perspectives on the secrets of larval fishes.

Underwater photos taken at night — when larval fishes migrate to within 200 meters of the ocean surface — reveal colors, body structures and behaviors that could never be seen in preserved specimens. Examining those same fishes back in the lab lets ichthyologists match the photographed larval fishes to known species, researchers report March 30 in Ichthyology & Herpetology.

Scientists at the Smithsonian Institution and the National Oceanic and Atmospheric Administration hatched a collaboration in 2016 with blackwater divers — who enter the ocean in the dark of night — to photograph larval fishes and collect them as specimens. With lights in hand, divers Jeff Milisen and Sarah Mayte snapped up-close photos of nearly 80 larval fishes, then gingerly captured and shipped them to scientists to be studied alongside their mugshots.

“Fish larvae that looked utterly drab as specimens have turned out to have brilliantly colored markings and fantastic structures,” says Ai Nonaka, a larval fish expert at the Smithsonian’s National Museum of Natural History in Washington, D.C.

Specialists like Nonaka sort out larval fish identities by looking at body shapes and minuscule features through microscopes and by analyzing DNA of larval tissue. Unlike their swimming parents, fish larvae drift on currents, and their strange body parts — adaptations for a drifting lifestyle — make larvae look nothing like adults.

“Larval fishes are extremely difficult to identify,” says Dave Johnson, an ichthyologist also at the Smithsonian. Scientists have mistakenly given larval fishes new scientific names, not recognizing them as early life stages of known species.

Because larval fishes are soft and fragile, they don’t travel well. Larvae lose fins and other delicate structures that evoke their behavior. The scalloped ribbonfish (Zu cristatus) larva, for example, has spaghetti-like ornamental fins sprinkled with white spots that get broken off on specimens. The way these ornamental structures appear to flow out like tentacles in the images of wild larvae suggests the larvae could be jellyfish mimics, say the study authors. 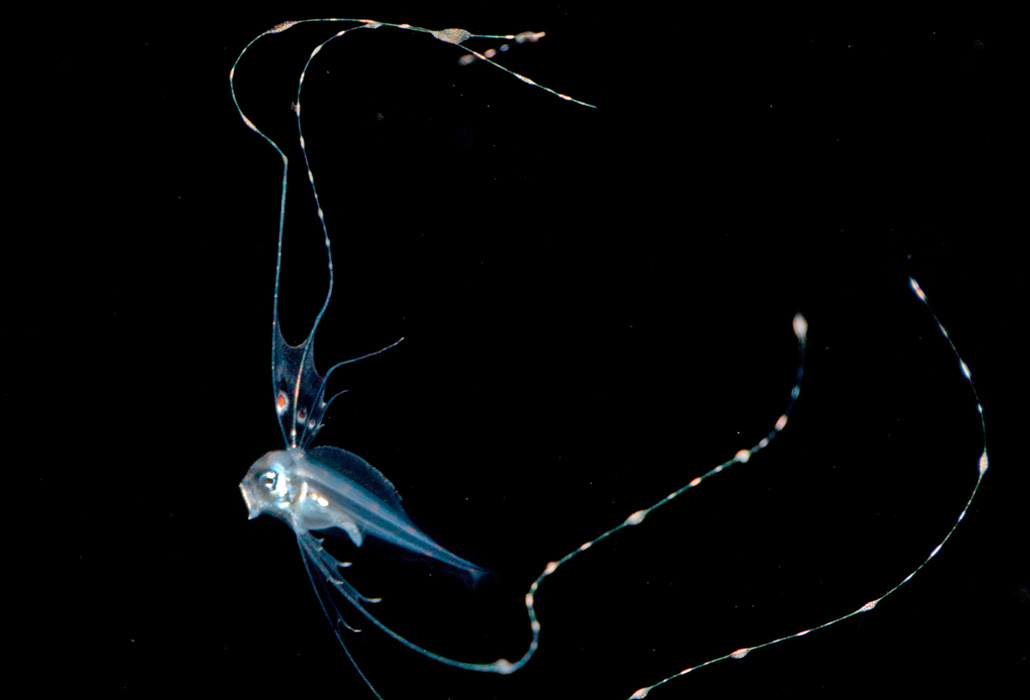 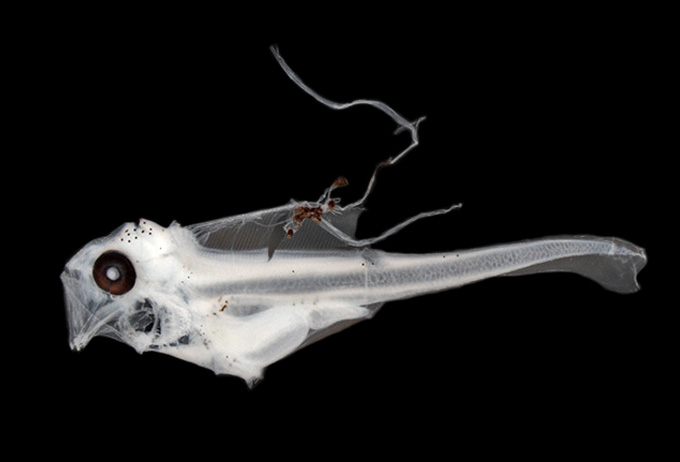 The trailing guts of a barbeled dragonfish (Aristostomias sp.) larva get mashed or broken off altogether, but the undersea photo reveals it coiled up into a tight corkscrew. Nonaka and Johnson confess that scientists don’t yet understand the function of the trailing guts seen in some larval fishes. One theory is that exposed innards might somehow increase digestion efficiency, while another suggests they could confuse predators. 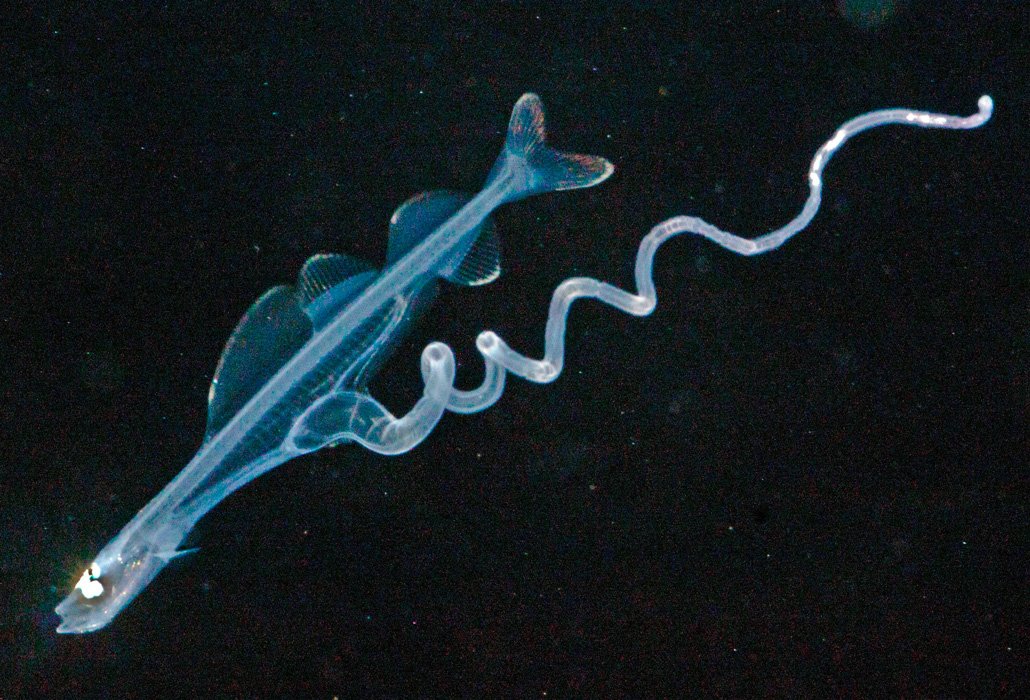 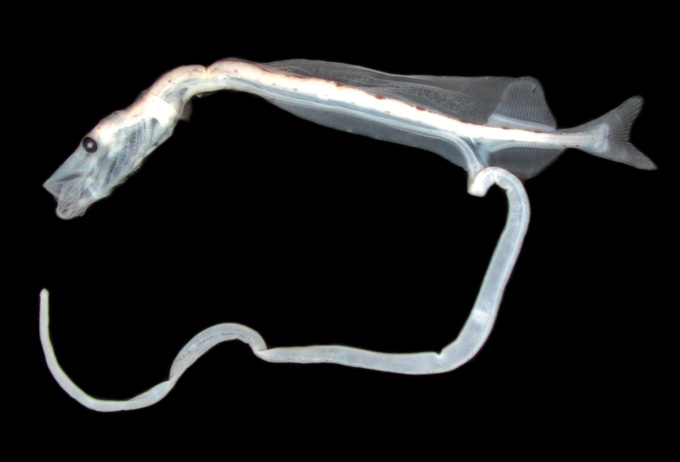 Ethanol preservation of specimens repels bacteria and fungi, but leaches out colors. The three-spot righteye flounder (Samariscus triocellatus) larva, bone white as a specimen, is bright blue. Its dorsal and anal fins are fringed with white, and rows of yellow spots dot the base of the fin rays. While their function has yet to be studied, it’s possible that these borders create a flickering visual effect to help the fish escape from predators, suggests Geoff Moser, a retired NOAA fisheries biologist not involved with the study. Called “flicker fusion,” it’s been examined in other animals such as striped snakes as a form of camouflage on the go. 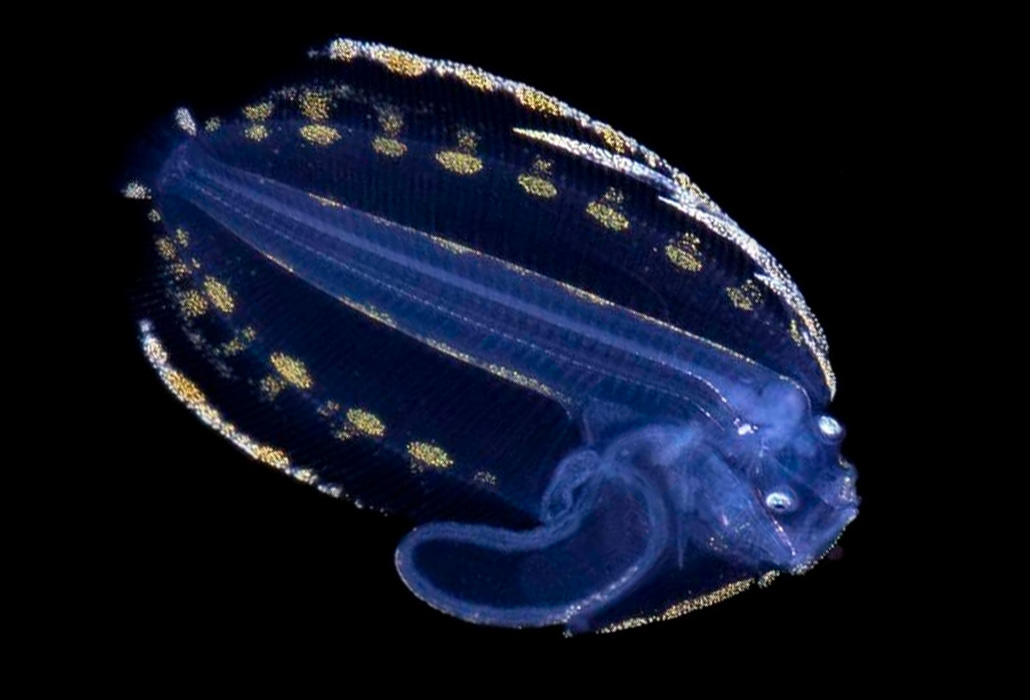 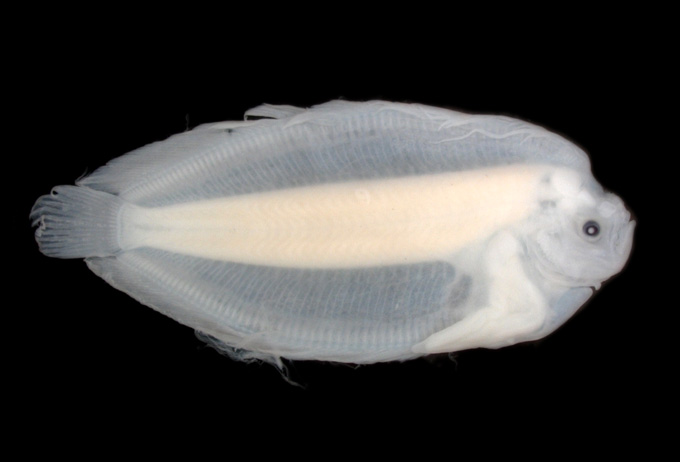 The deep-sea tripodfish (Bathymicrops sp.) is plain and pale when prepared as a specimen and uniform brown as an adult fish — not exactly a looker. But the larva appears to have donned a clown costume with large white and orange polka dots flecked on its otherwise blue-hued body. In an ethanol specimen, its pectoral fins look soft and ghostly, whereas the living larva sports flamboyant, spiky and spotted fins. The function of the coloration is unknown. says Nonaka, but it could also be a flicker fusion trick. 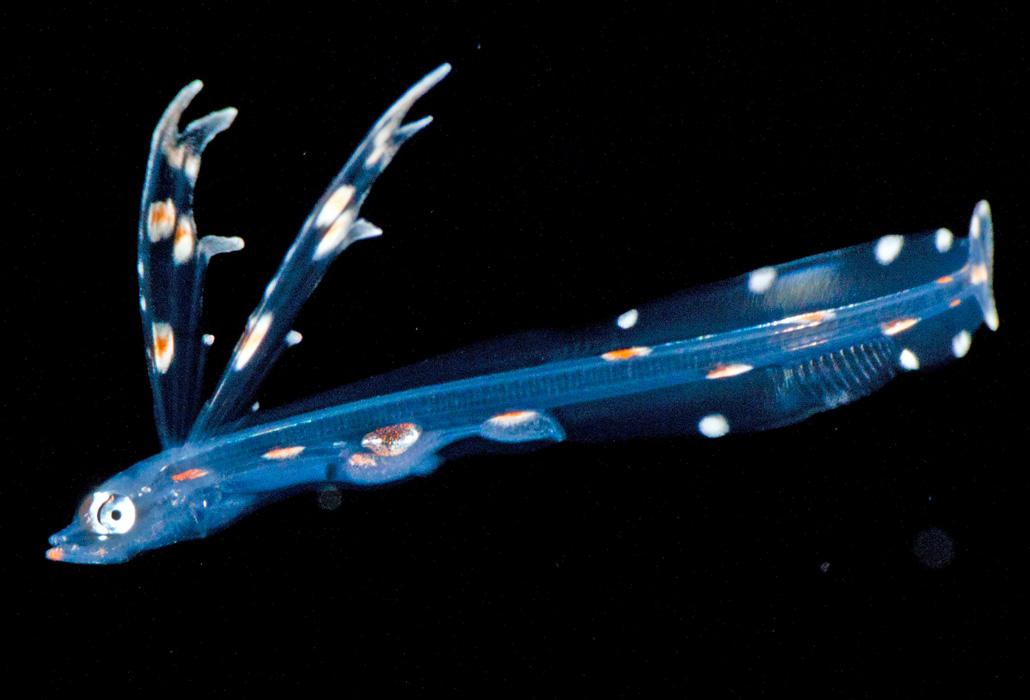 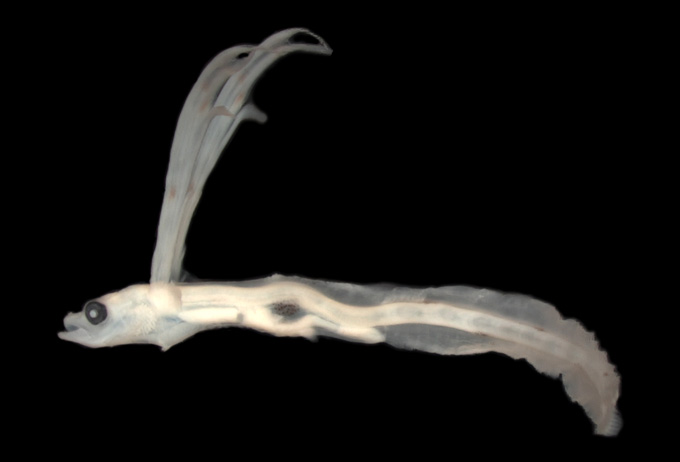 In larval specimens, scientists can observe some structures as evidence of behaviors. But undersea observations of wild larval fishes can show what they’re really up to when they are alive. The larva of the barred conger (Ariosoma fasciatum) is super flat, quite unlike the cylindrical adult. Yet a photo shows that it swims like an adult barred conger, by undulating its long body laterally. So, while it’s more svelte as a larva, it’s got some of the adult movements down. 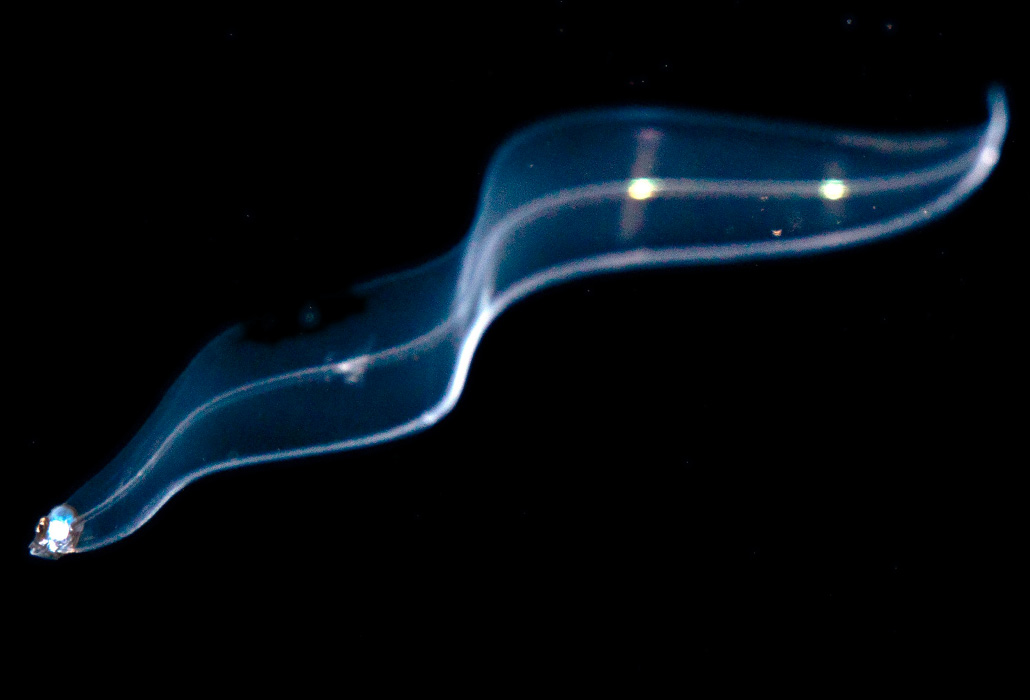 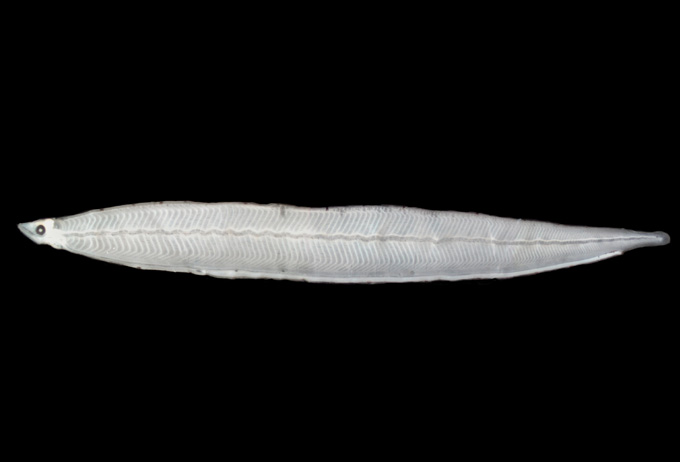 Undersea observations can also reveal associations larvae have with other marine animals, including other tiny critters that also ride the currents. For example, a petite Pacific pomfret (Brama japonica) larva was caught on camera riding on a jellyfish. That’s a discovery that the study authors were unwilling to even speculate about. Although larval fishes have been seen taking shelter in the tentacles of jellies, hitching a ride on top of a jellyfish seems like an odd twist on that behavior. 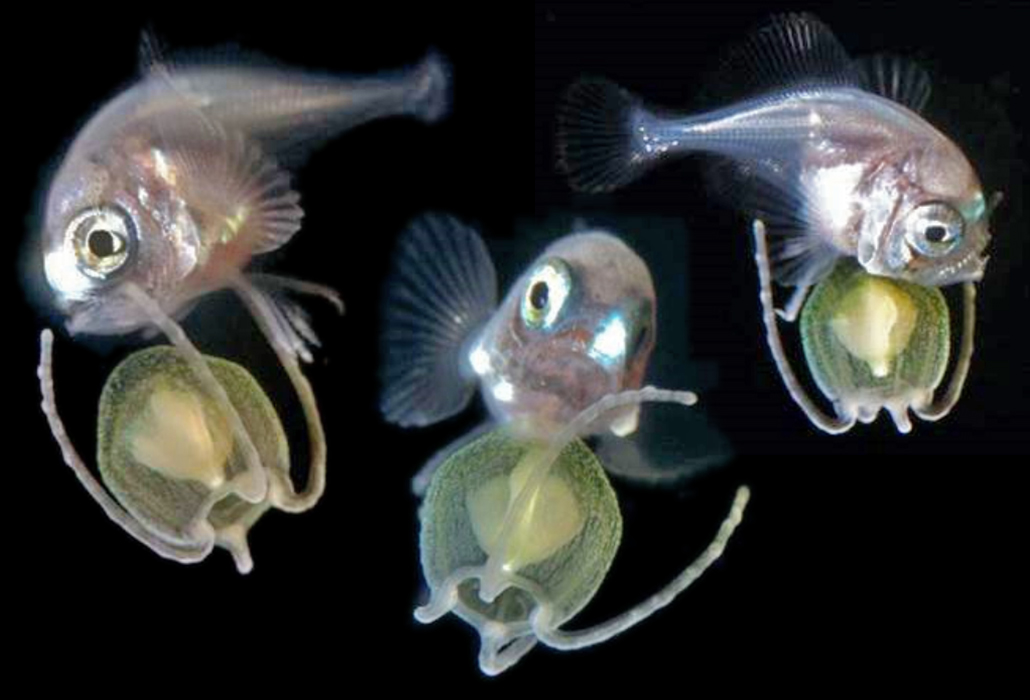 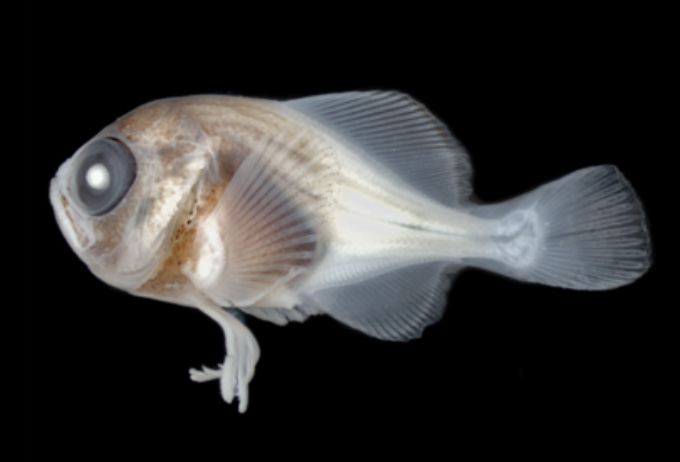 Each larval fish that gets identified by scientists sets the stage for conservation. By knowing where larval fishes of particular species live, researchers can better advise on how to manage the ocean ecosystems the fishes depend on for survival.

Conservation planning also requires knowledge of behavior (SN: 12/30/10). So photographing larval fishes and making their specimens available for identification means researchers get a handle on fishes’ behavioral adaptations for survival in the wild.

“I’ve been working with fish larvae for over 40 years,” says Moser. “The chance to see these larvae in their environment was a wonderful advance in our scientific endeavors.”

‘Drunk mother beat boyfriend with hairdryer after he refused her sex’