Barnacles aren’t exactly renowned for their athleticism, staying glued in place for much of their lives. But turtle-riding barnacles are fidgety travelers.

As adults, the turtle barnacles (Chelonibia testudinaria) can move about 1.4 millimeters a week  across turtle shells, researchers report October 6 in Proceedings of the Royal Society B. Previous observations of barnacles stuck on green sea turtles suggested that the creatures were somehow mobile, propelled by either outside forces or their own actions. But this is the first experimental confirmation that they embark on self-directed treks.

Barnacles start life as free-swimming larvae, eventually settling and adhering to rocks, ship hulls or even the skin of marine mammals (SN: 9/27/16). Some species have been known to rotate on their base or even scooch a smidge when nudged by a too-close neighbor. But once settled in, they live and grow, eating particles of food drifting by what was long considered their permanent address.

Now it turns out some may need forwarding addresses. Benny K.K. Chan, a marine ecologist at Academia Sinica in Taipei, Taiwan, decided to test C. testudinaria’s mobility experimentally when one of his students successfully transferred turtle barnacles from crabs to an acrylic plate. The team followed 15 transferred barnacles with time-series photography over a year.

Chan’s team also collaborated with researchers in Spain to track the movement of barnacles on the shells of five captive loggerhead sea turtles over a few months and with citizen scientist divers who gathered photos of wild green sea turtles in Taiwan. The team logged the positions  of the green turtles’ barnacles over 16 weeks.

Turtle-riding barnacles moved as much as 54 millimeters — a little less than the length of an adult human’s thumb — during this time. Laboratory barnacles moved too, leaving trails of pale cement in layered, crescent-shaped patterns. “We were amazed,” says Chan.

How the barnacles move is still a mystery, but researchers think the crustaceans may partially dissolve their own cement and lift their soft base slightly off the surface. “Then the barnacle can secrete a new cement layer and probably surf on the cement,” says Chan.

The barnacles mostly traveled against the flow of any currents, showing that they weren’t just moving from the pressure of flowing water. They also didn’t get closer together, suggesting that the barnacles are seeking better locations to filter food out of the water rather than mating opportunities. 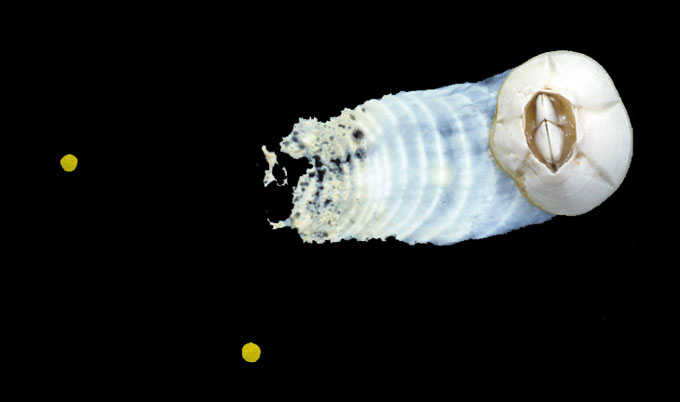 A turtle barnacle (Chelonibia testudinaria) leaves a cement trail as it glues and unglues itself over and over in its trek across an acrylic plate, part of an experiment to track whether barnacles move and if so, how. The yellow dots are spatial reference points that help the researchers measure how far the barnacles are moving.B.K.K. Chan and Jr-Chi Lin

“This is rock-solid proof of something that is otherwise anecdotal,” says marine biologist Henrik Glenner at the University of Bergen in Norway not involved with this study.

Barnacles typically exemplify biological competition for space and resources, because after settling they must compete in that spot for the rest of their lives, Glenner says. But being mobile upends this dynamic.

And it raises new questions. Glenner wonders if any barnacles in crowded, intertidal environments might also be capable of movement. And Tara Essock-Burns, a marine ecologist at the University of Hawaii at Manoa, wants to learn more about the cement itself and its flexible properties. “It is possible that turtle barnacle cement has a very different biochemistry than other barnacles that permanently adhere to [surfaces],” she says. This is precisely what Chan and his team plan on investigating next.

“There is a reason that Darwin was so captivated by barnacles,” says Essock-Burns. “They never cease to amaze us.”

What did Dr Sanjay Gupta say on Joe Rogan’s podcast?

Corals may store tons of microplastics in their skeletons

Fungal infections are increasing. A sailor’s story shows their impact

The Omicron Variant: We Still Know Almost Nothing

When will SpaceX Starship SN20 launch and go to the Moon, Mars?

The Solar System Is Full of Brines