The fearsome Tyrannosaurus rex could generate tremendous bone-crushing bite forces thanks to a stiff lower jaw. That stiffness stemmed from a boomerang-shaped bit of bone that braced what would have been an otherwise flexible jawbone, a new analysis suggests.

Unlike mammals, reptiles and their close kin have a joint dubbed the intramandibular joint within their lower jawbone, or mandible. New computer simulations show that with a bone spanning the IMJ, T. Rex could have generated bite forces of more than 6 metric tons, or about the weight of a large male African elephant, researchers reported April 27 at the virtual annual meeting of the American Association of Anatomy.

In today’s lizards, snakes and birds, the IMJ is bound by ligaments, making it relatively flexible, says study author John Fortner, a vertebrate paleontologist at the University of Missouri in Columbia. That flexibility helps the animals maintain a better grip on struggling prey and also allows the mandible to flex wider to accommodate larger morsels, he notes. But in turtles and crocodiles, for example, evolution has driven the IMJ to be rather tight and inflexible, enabling strong bite forces.

Until now, most researchers have presumed that dinosaurs had lower jaws with a flexible IMJ, but there’s a big flaw with that premise, Fortner notes. A flexible jaw wouldn’t have enabled bone-crushing bite forces, but fossil evidence — including coprolites, or fossil poop, filled with partially digested bone shards — strongly suggests that T. rex could indeed chomp down with such forces (SN: 10/22/18).

“There’s every reason to believe that T. rex could bite really hard, kinda off the charts,” says Lawrence Witmer, a vertebrate paleontologist at Ohio University in Athens who wasn’t involved in the study. “It’d be nice to know how they could carry off these bite forces.”

Using a 3-D scan of a fossil T. rex skull, Fortner and his colleagues created a computer simulation of the mandible that could be used to analyze stresses and strains, akin to the way engineers analyze bridges and aircraft parts. Then they created two versions of the virtual jawbone. In both of them, they cut in half a boomerang-shaped bone, called the prearticular, that is adjacent to but spans the IMJ. Then, in one simulation, they joined the two sides of the IMJ with virtual ligaments that rendered the jawbone flexible. In a second version of the simulation, the team virtually rejoined the two pieces of the prearticular with bone rather than ligaments.

The team’s simulations showed that when the severed prearticular was virtually rejoined with ligaments, stresses couldn’t be effectively transferred from one side of the IMJ to another, says Fortner. In that scenario, the mandible became too flexible to generate large bite forces. But when the pieces of the prearticular were rejoined with bone — similar to having the bone remain intact — stresses could be smoothly and efficiently transferred from one side of the joint to another. 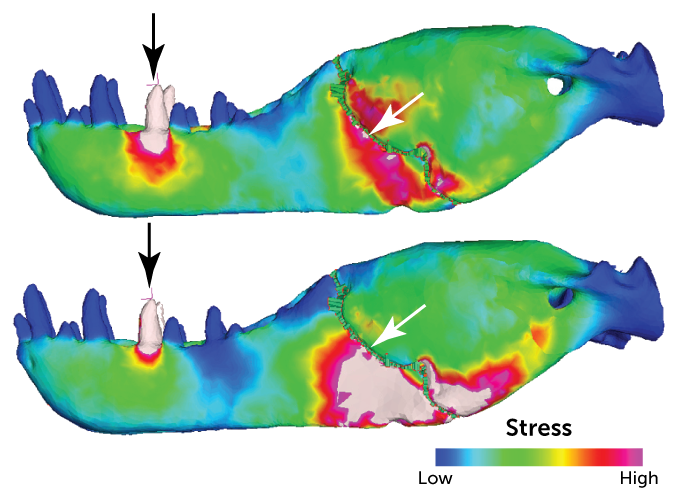 Two simulated T. rex jawbones reveal how a small bone (not visible) that spans a joint (white arrow) provides for a strong bite. In a version where that bone is not intact (top), the jawbone flexes, which prevents stress induced by a bite at one tooth (black arrow) from transferring effectively across the joint. But in a jawbone in which that bone is intact (bottom), the more rigid joint transfers stresses effectively, enabling greater bite forces.John Fortner 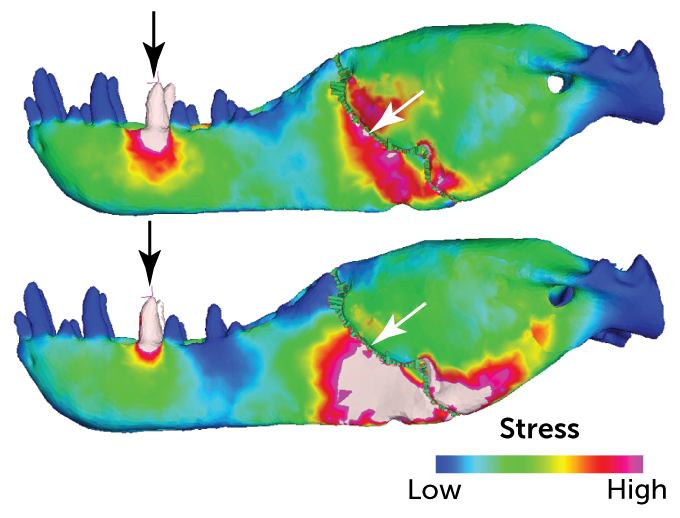 Two simulated T. rex jawbones reveal how a small bone (not visible) that spans a joint (white arrow) provides for a strong bite. In a version where that bone is not intact (top), the jawbone flexes, which prevents stress induced by a bite at one tooth (black arrow) from transferring effectively across the joint. But in a jawbone in which that bone is intact (bottom), the more rigid joint transfers stresses effectively, enabling greater bite forces.John Fortner

The team’s findings “are potentially interesting,” says Witmer. “The prearticular is not a particularly big bone, but it could be involved in the bite,” he notes.

The T. rex mandible is a complicated arrangement of various bones, but “the prearticular seems to lock the system together,” says Thomas Holtz, Jr., a vertebrate paleontologist at the University of Maryland in College Park who wasn’t involved in the study. These simulations show “it provides a demonstrable benefit.”

In the future, Fortner and his colleagues will conduct similar analyses for the mandibles of other dinosaurs in the T. rex lineage to see how the arrangements of constituent bones, and particularly the IMJ, might have evolved over time.

The results of such studies could be quite interesting, says Holtz. Dinosaurs near the base of the T. rex family tree had jawbones that were shaped differently, and they didn’t have bones to brace the IMJ, he notes. These theropods, or bipedal meat-eating dinosaurs, also had bladelike teeth rather than the banana-shaped teeth of T. rex, so they probably had a vastly different feeding style. In those ancestors, Holtz notes, a flexible IMJ may have served as a “shock absorber” when chomping down or during attacks on prey.