The birds’ flashy, iridescent feathers heat up more than other types of feathers, possibly making it harder to stay cool in hot, sunny conditions. If so, the colorful plumes may be costly ornaments for luring mates, researchers report August 4 in the Journal of the Royal Society Interface.

Many studies on the thermal properties of animal color have previously focused on differences between how dark and light colors derived from pigments react to light and heat, says Svana Rogalla, a biophysicist at the Biofisika Institute in Bilbao, Spain. Less attention has been paid to how heat interacts with structural color — often vibrant, iridescent hues created by light refracting off of microscopic structures. These structures are found in everything from the scales of deep-sea worms (SN: 5/25/20) to spiders’ exoskeletons (SN: 9/9/16).

In the new study, Rogalla and colleagues turned to sunbirds, nectar-feeding birds typically smaller than sparrows that are native to Africa, Asia and Australia. Sunbirds have feather colors that come from a mix of sources, including pigments like fiery carotenoids and dark melanin as well as iridescent structural color.

The researchers examined 15 sunbird species preserved at the Field Museum in Chicago, heating the specimens under a lamp that mimics sunlight and then measuring the surface temperatures of feathers and the preserved birds’ skin. 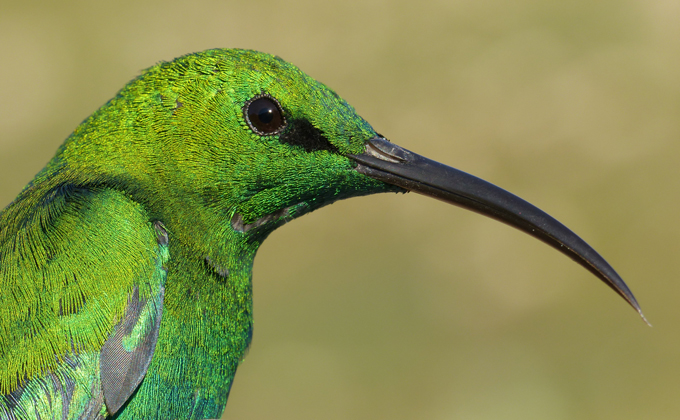 Birds with iridescent feathers, like this malachite sunbird (Nectarinia famosa), may pay a price for their brilliant plumage. Those feathers absorb more light than other feather types, possibly making it harder to stay cool.Svana Rogalla

Iridescence is more pronounced in male sunbirds than females and is used in courtship displays. Rogalla wonders if the flashy colors, by possibly contributing to heat stress, create an evolutionary conflict between mating and staying cool, or thermoregulating. “It could be a trade-off,” she says, “being very colorful to attract females, but then you have a cost when you sit in the sun when it’s hot.”

Allison Shultz, an ornithologist at the Natural History Museums of Los Angeles County in California who was not involved with this research, says the flashy plumage may act as a signal demonstrating a male bird’s relative vigor and resilience. “Maybe it shows [females] that males are able to deal with this higher heat load by having iridescent colors.”

Still, there’s a big caveat to the experimental setup. The study’s results may be “difficult to put in perspective” because the experiments were conducted on dead birds, says Vinod Kumar Saranathan, an evolutionary biologist at Yale-NUS College in Singapore. “You don’t have the benefit of the live bird [to evaluate], manipulating its body and doing various things to actively thermoregulate.”

Sunbirds can release heat by panting or changing feather positions. And the birds rarely stay in the sun for long, Saranathan says, explaining that they dart from flowers in sunny areas to more shaded forest. If iridescent feathers lose heat as quickly as they acquire it, the sunbirds could use shade to cool off, blunting the effect of the hot plumage.

“Iridescence has evolved so many times independently across the [bird evolutionary tree],” Saranathan says. If shiny feathers were particularly burdensome to birds, he says, that repeated evolution wouldn’t be likely.

Even so, the findings have implications for how iridescence could contribute to heat effects from climate change. Rogalla points out that small birds like sunbirds — vulnerable to big swings in ambient temperatures — have already perished en masse from extreme heat events. Such instances of mass death have occurred among Australian parrots, for example, where intense heat waves have killed hundreds of budgerigars and scores of cockatoos in recent years. With their hot feathers, iridescent sunbirds may be especially at risk.

A warming climate may force iridescent birds to be active for shorter amounts of time during hot days to avoid the additive impact of solar heating, Saranathan says. If so, he adds, such a truncated schedule may increase competition for food in the precious remaining active hours.

‘This Is Us’ Cast’s Dating Histories: Milo Ventimiglia, More