ANCIENT artwork adorning the walls of an Egyptian prince’s tomb has revealed an extinct type of goose, according to new analysis.

A bird unknown to modern science has been spotted amongst the 4,600-year-old paintings, which also feature realistic depictions of creatures we know exist.

An evolutionary biologist thinks these grey geese are an example of an extinct speciesCredit: romilio

The fresco depicting local aquatic birds has had archaeologists in awe ever since its discovery in 1871.

It was discovered at a site called Meidum in Lower Egypt and is aptly called ‘Meidum Geese’.

More recently, an evolutionary biologist has taken a closer look at all the bird paintings and realised there’s probably a big reason why scientists can’t agree on exactly what species they are.

University of Queensland researcher Dr Anthony Romilio spotted a speckled goose he thinks has never been seen before in the modern world. 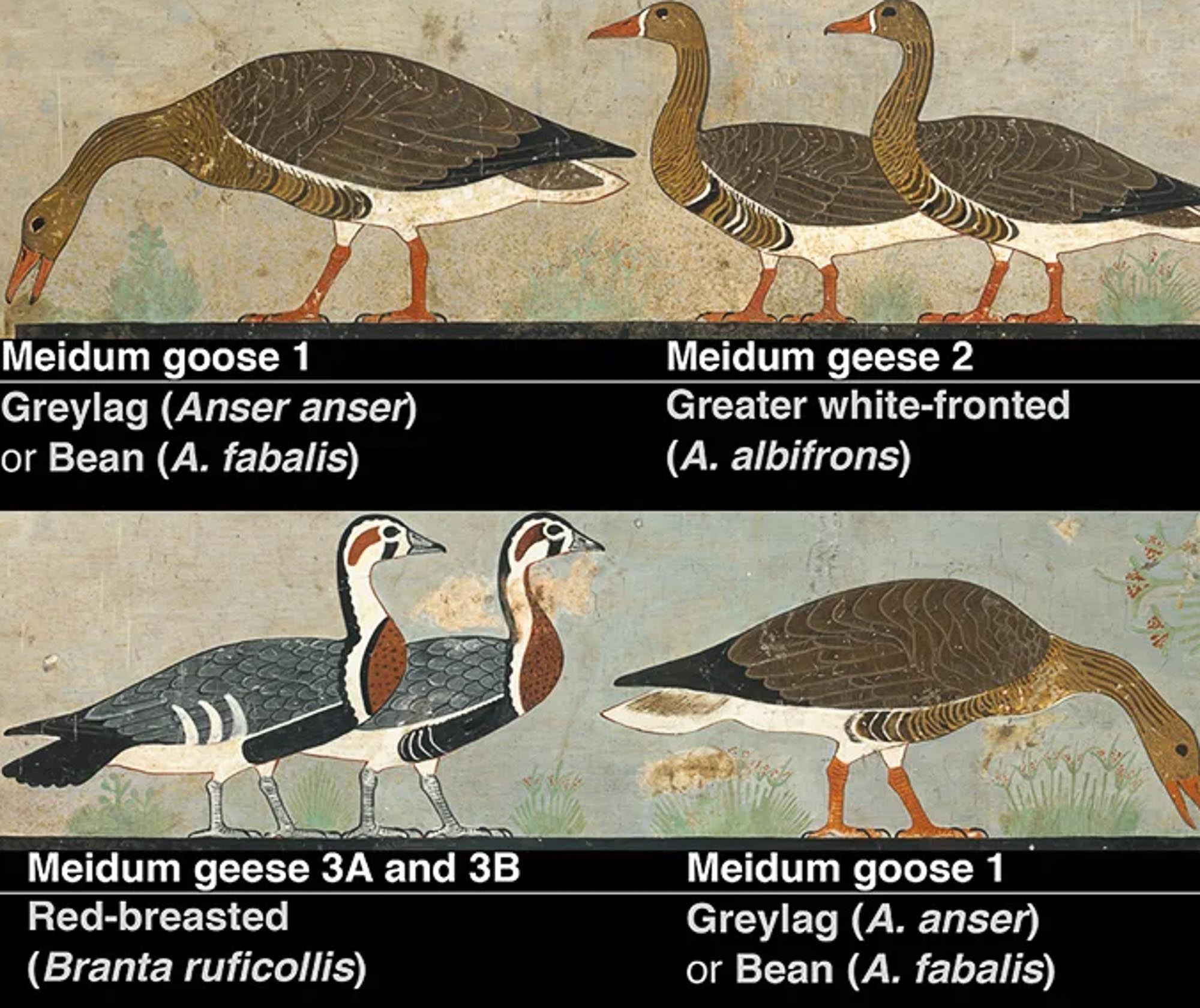 The painting actually shows several geese but new analysis claims the geese in the lower left-hand-corner have been misidentified for yearsCredit: romilio

He said: “The painting, Meidum Geese, has been admired since its discovery in the 1800s and described as ‘Egypt’s Mona Lisa.

“Artistic licence could account for the differences with modern geese, but artworks from this site have extremely realistic depictions of other birds and mammals.”

Other paintings in the tomb of prince Nefermaat I and his wife Itet show realistic depictions of animals like dogs, cattle, leopards and white antelope.

That’s why the Romilio thinks it would be odd to include real animals and then make up one species of goose.

The geese in question have previously been labelled as a red-breasted goose species found in western Europe.

However, they’ve never been an exact match to that species an no remains have been found in Egypt to verify those claims.

Romilio said: “From a zoological perspective, the Egyptian artwork is the only documentation of this distinctively patterned goose, which appears now to be globally extinct.

“I applied the Tobias criteria to the goose, along with other types of geese in the fresco.

“This is a highly effective method in identifying species – using quantitative measurements of key bird features – and greatly strengthens the value of the information to zoological and ecological science.”

This wouldn’t be the first time an extinct animal has been spotted in ancient artwork and it’s unlikely we’ll find out exactly what happened to the goose.

The painting is now kept in Cairo’s Museum of Egyptian Antiquities.

The artwork research has been published in the Journal of Archaeological Science: Reports.

In other archaeology news, new analysis of the remains of an ancient Egyptian pharaoh has revealed he may have been brutally murdered on the battlefield.

Human skeletons have been discovered on a 1717 pirate shipwreck just off the coast of Cape Cod in the US.

And, an ancient mummy with a golden tongue has been unearthed in Egypt.

What do you think of the ‘extinct goose’ painting? Let us know in the comments…