The dazzling lights of Las Vegas are meant to attract. And on one summer night, they did just that, luring millions of grasshoppers— a whopping 30.2 metric tons’ worth.

That insect cloud gives us the first numbers for the size of artificial light’s impact on insects at such a large scale, says Elske Tielens, an ecologist at the University of Oklahoma in Norman.

That dramatic night, July 27, 2019, marked the peak of weeks of grasshoppers taking to the air after dark and, like moths bewitched by a porchlight, filling the brightly lit streets of the most intensely illuminated city in the United States. The spectacle made international news.

Just how big was it, Tielens and her colleagues wondered. They got to work, using Nevada weather-prediction radar data from the National Oceanic and Atmospheric Administration archives to study the horde of hard-to-count insects. 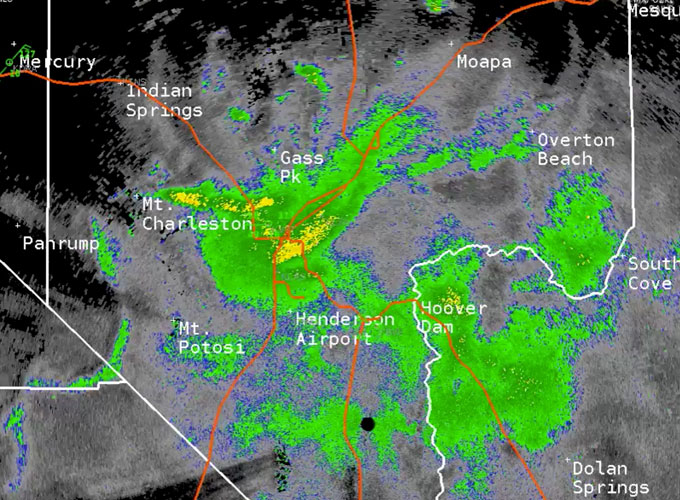 This National Weather Service image shows radar reflecting off of a massive cloud of more than 45 million grasshoppers in the air above Las Vegas on the night of July 27, 2019.NWS Las Vegas

These weren’t the fabled locust species that switch from a solitary phase to a physically distinct gregarious one that travels in great clouds eating plants down to the nubs (SN: 11/26/18; SN: 8/12/20). Instead they were pallid-winged grasshoppers (Trimerotropis pallidipennis) that had survived in unusual numbers after a generous, moist start of the year.

When the grasshoppers lifted up from the ground after dusk, the radar bounced off the loose mass of flying insects as it would any rain droplets and ice crystals. To predict the weather, “we filter out the biology,” Tielens says. For insect censusing, “we filter out all the ‘boring’ water drops and clouds.”

Each grasshopper weighs only about two-thirds of a gram, she and colleagues note March 31 in Biology Letters. So once the radar let the team determine the numbers, it estimated the total weight. “It’s a little dumbfounding to try to comprehend more than 45 million grasshoppers,” she says.

‘We are on a journey, but it is not over yet’