Like a dried-up lemon from the back of the fridge, neutron stars are less squeezable than expected, physicists report.

New measurements of the most massive known neutron star find that it has a surprisingly large diameter, suggesting that the matter within isn’t as squishy as some theories predicted, physicists with the Neutron star Interior Composition Explorer, or NICER, reported April 17 at a virtual meeting of the American Physical Society.

When a dying star explodes, it can leave behind a memento: a remnant crammed with neutrons. These neutron stars are extraordinarily dense — like compressing Mount Everest into a teaspoon, said NICER astrophysicist Zaven Arzoumanian of NASA’s Goddard Space Flight Center in Greenbelt, Md. “We don’t know what happens to matter when it’s crushed to this extreme point.”

The more massive the neutron star, the more extreme the conditions in its core. Jammed together at tremendous densities, particles may form unusual states of matter. For example, particles known as quarks — usually contained within protons and neutrons — may roam freely in a neutron star’s center.

The core’s composition determines its squeezability. For example, if quarks are free agents within the most massive neutron stars, the immense pressure will compress the neutron star’s core more than if quarks remain within neutrons. Because of that compressibility, for neutron stars, more mass doesn’t necessarily translate to a larger diameter. If neutron star matter is squishy, the objects could counterintuitively shrink as they become more massive (SN: 8/12/20).

To understand how neutron star innards respond to being put through the cosmic wringer, scientists used the X-ray telescope NICER aboard the International Space Station to estimate the diameters of rapidly spinning neutron stars called pulsars. In 2020, NICER sized up a pulsar with a mass about 1.4 times the sun’s: It was about 26 kilometers wide (SN: 1/3/20).

Researchers have now gauged the girth of the heftiest confirmed neutron star, with about 2.1 times the mass of the sun. But the beefy neutron star’s radius is about the same as its more lightweight compatriot’s, according to two independent teams within the NICER collaboration. Combining NICER data with measurements from the European Space Agency’s XMM-Newton satellite, one team found a diameter of around 25 kilometers while the other estimated 27 kilometers, physicists reported in a news conference and in two talks at the meeting.

Many theories predict that the more massive neutron star should have a radius that is smaller. “That it is not tells us that, in some sense, the matter inside neutron stars is not as squeezable as many people had predicted,” said astrophysicist Cole Miller of the University of Maryland in College Park, who presented the second result.

“This is a bit puzzling,” said astrophysicist Sanjay Reddy of the University of Washington in Seattle, who was not involved in the research. The finding suggests that inside a neutron star, quarks are not confined within neutrons, but they still interact with one another strongly, rather than being free to roam about unencumbered, Reddy said.

The measurements reveal another neutron star enigma. Pulsars emit beams of X-rays from two hot spots associated with the magnetic poles of the pulsar. According to the textbook picture, those beams should be emitted from opposite sides. But for both of the neutron stars measured by NICER, the hot spots were in the same hemisphere.

“It implies that we have a somewhat complex magnetic field,” said NICER astrophysicist Anna Watts of the University of Amsterdam, who presented the first team’s result. “Your beautiful cartoon of a pulsar … is for these two stars completely wrong. And that’s brilliant.” 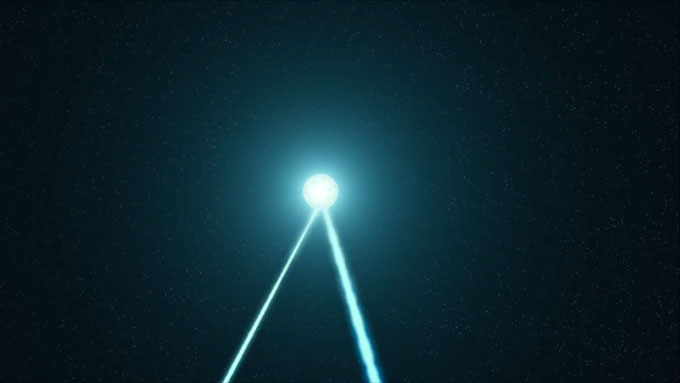 Beams of radiation are emitted from the magnetic poles of spinning neutron stars called pulsars. Scientists typically envision pulsars with two beams on opposite sides, like a lighthouse. But the beams of a newly measured pulsar (illustrated) come from the same hemisphere.NASA’s Goddard Space Flight Center

Jeremy and Jinger Vuolo Once Thought Marriage Was ‘a No-Go’