The mole began hammering into the soil earlier this month, but it didn’t make much progress. When the mission left Earth, the team had anticipated that the tip of the probe would reach a depth of about 16 feet (5 meters) below the ground. Scientists now believe it has reached only about 16 inches (40 centimeters). NASA has decided to call it: Insight’s overall mission will continue, but the mole’s work is over.

“It’s a huge disappointment,” Sue Smrekar, the deputy principal investigator of the InSight mission at JPL, told me. Sometimes, a Mars mission is a triumphant success, a wonder that shows the people back home a glimpse of a world they can’t experience for themselves, and brings the species a little closer to understanding its own story on this planet. Other times, it’s closer to a Roomba stuck in a corner of a living room millions of miles away. 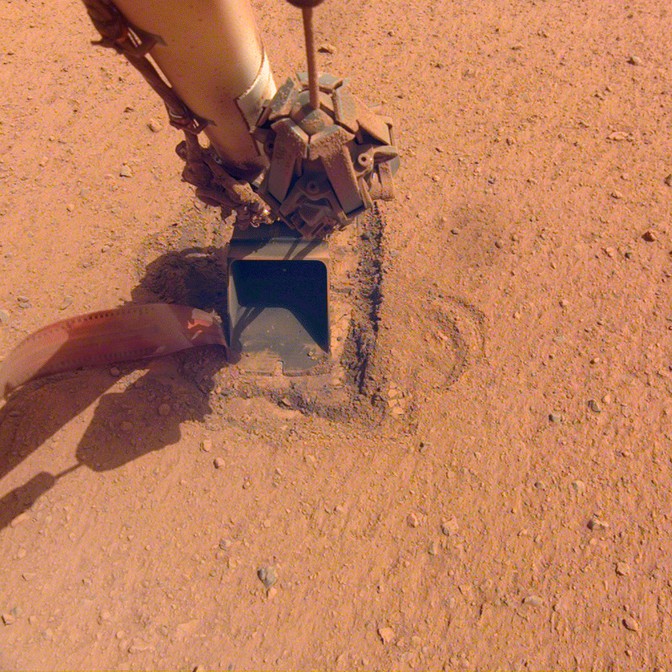 Mars used to be like our own planet back in the day, a few billion years ago. It was wrapped in a thick atmosphere. It had lakes and rivers of flowing water and clouds in the sky. But somewhere along the line, Mars and Earth, rocky worlds forged from the same nebulous cloud of leftover star stuff, diverged. Mars became a cold, barren world. Earth clung to its warm conditions, giving rise to a lush landscape.

The InSight mission and its instruments were designed to investigate Mars’s history and the forces that shape rocky planets. The mole, in particular, was meant to hammer itself into the ground, trailed by a tether embedded with sensors. InSight’s landing spot met the usual criteria for Mars missions: smooth, flat, and boring. No one wants their robot to land on a rock and tip over. Geologists pored over observations from orbiting spacecraft and other surface missions and settled on a spot they thought would have soil as fine as grains of sand on a beach—just the kind their new probe needed.

When the probe started hammering in the winter of 2019, the team gathered at JPL headquarters in California to await a message from Mars. It anticipated that the mole would have traveled some distance underground. But the data returned a startling number: zero.

Had the mole hit a rock? Was it damaged? The team commanded the probe to keep trying, checking after each bout of several thousand hammer strokes. The first few months of troubleshooting were frantic, Hudson recalled, “because there were so many possible things that could have been wrong.”

It turned out to be the soil itself. The team had expected that as the mole hammered and descended, loose soil would collapse around the probe, providing the friction it needed to keep going. But this soil was sticky, clumping together, and had drawn away from the mole, leaving nothing but space on all sides. “It’s as if you are trying to hammer a nail into a hole in the wall,” explains Tilman Spohn, the principal investigator for the mole experiment at the German Aerospace Center, which provided the tool to NASA. “The nail has no grip.”