HUGE fragments of an alien world may be buried deep beneath the surface of our planet.

A study has identified blobs of rock under Earth’s crust that possibly belonged to Theia, a Mars-sized planet thought to have collided with our pale blue dot billions of years ago.

Blobs of rock (red) under Earth’s surface may have once belonged to an alien planetCredit: Ward et al., Geochemistry, Geophysics, Geosystems, 2020)

The almighty crash is believed to have created the Moon – and remnants of the impact may lurk deep within our planet’s mantle.

Two of the gigantic masses were studied: One buried under Africa and the other below the Pacific Ocean.

They’re hundreds of miles tall and thousands of miles across, sitting close to our planet’s metallic core, the study found. 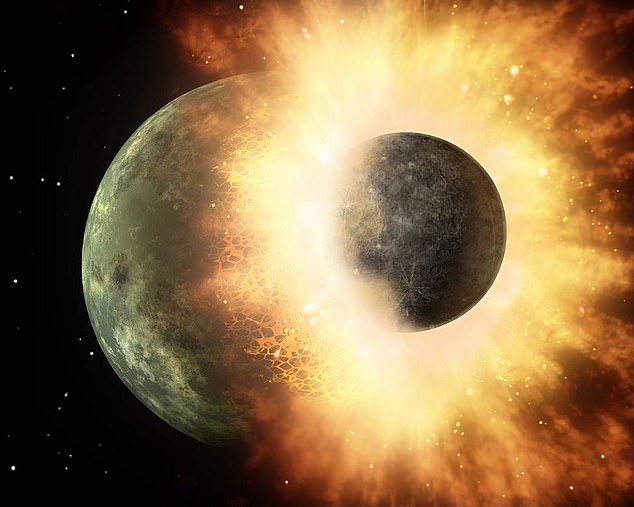 The rock possibly belonged to Theia, a Mars-sized planet thought to have collided with Earth billions of years agoCredit: Asu

They are denser and chemically different to the rock surrounding them, suggesting the weren’t originally a part of our planet.

Theia’s mantle was denser than Earth’s, according to Yuan, which may have allowed it to accumulate near our planet’s core following impact.

“Theia’s mantle may be several per cent intrinsically denser than Earth’s mantle,” Yuan explained in a summary of the team’s findings presented last week at the Lunar and Planetary Science Conference.

Scientists used data on seismic waves to track the size of the blobsCredit: Asu

“This enables the Theia mantle materials to sink to the Earth’s lowermost mantle and accumulate into thermochemical piles that may cause the seismically-observed LLSVPs.”

Experts have long believed that a rogue, Mars-sized planet smashed into Earth around 4.5billion years ago.

The impacting planet, referred to as Theia, is thought to have fused with Earth, meaning parts of it should exist in the mantle today.

Chemical exchanges in the wake of this violent merger may have created the conditions for life on our planet.

The collision is thought to have thrown up vast clouds of material that gravity later fused together to form the Moon.

Here’s a brief history of life on our planet

Analysis of Moon rocks has suggested that our rocky satellite could actually be a combination of chunks of Earth and Theia.

The idea that LLSVPs are in fact remnants of Theia has been around for years, but the new study presents the most compelling evidence yet.

The study reveals that chemical signatures linked to LLSVPs are at least as old as the Theia impact.

While it’s not conclusive proof that ties them to an ancient alien world, it certainly shows that the theory is plausible.

“This crazy idea is at least possible,” Yuan, a PhD candidate at ASU, told Science.

In other space news, the DNA of 6.7 million species could be stored inside the Moon in case there’s a disaster that destroys life on Earth.

The largest asteroid to make a ‘close approach’ to Earth in 2021 is set to shoot past this month.

What do you make of the Theia find? Let us know in the comments…