Meters below the copper, sun-broiled dirt of northwestern Australia, an entire community hides in the dark. Geckos lay their eggs as centipedes and scorpions scuttle by. A snake glides deeper underground, away from the light. This subterranean menagerie is capitalizing on an old burrow, gouged into the earth by a massive lizard.

Now, a new study shows that two different species of Australian monitor lizard dig arrays of these burrows into the earth and that the openings have a great impact on local biodiversity, providing shelter to a surprisingly wide assortment of animal life. The findings, published December 18 in Ecology, indicate that the lizards are “ecosystem engineers,” akin to beavers that flood streams with dams or seabirds that fertilize reefs with their guano, the researchers say (SN: 7/11/18).

Sean Doody, an ecologist at the University of South Florida in St. Petersburg, started monitoring the cat-sized lizards in northern Australia with colleagues from Australia’s University of Canberra in Bruce and the University of Newcastle. The team was tracking how invasive, poisonous cane toads were adversely impacting the reptiles.

Until recently, it wasn’t clear where monitor lizards lay their eggs. Reaching into burrows thought to contain their eggs yielded nothing. Then Doody and his team started excavating burrows of the yellow-spotted monitor (Varanus panoptes) and found that the holes were a tight helical shape, plunging into the soil roughly four meters — deeper than any other known vertebrate nest — with eggs at the very bottom. What’s more, the nests was part of a warren consisting of dozens of twisting burrows, each made by a single monitor and arranged in the soil like dozens of fusilli noodles set vertically.

“We kept digging these things up, and we started finding lots of animals in most of them,” Doody says. 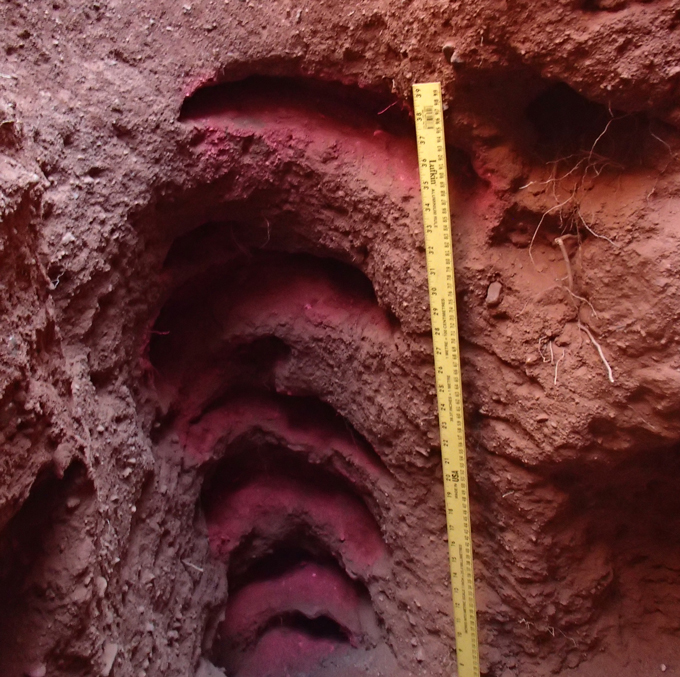 A helical nesting burrow (shown) of a sand goanna (Varanus gouldii) has been excavated, revealing six turns in the clockwise direction. The twisting tunnel has been sprayed with pink paint to distinguish it from the surrounding soil.Sean Doody

The team found arthropods, snakes, toads and other lizards in the nests of yellow-spotted monitors and sand goanna monitors (Varanus gouldii), which dig similar burrows. At first it was a few creatures here and there, Doody says, but then the team found 418 Uperoleia frogs in a single warren. In all, the team found nearly 750 individuals of 28 different vertebrate species in a combination of 16 warrens made up of many individual nesting burrows and a handful of foraging burrows, made when the lizards dig for prey.

Some animals are using the burrows for overwintering, Doody says. Others use them as refuges when the creatures need to go dormant during the hot dry summer. Still others catch prey in there, while “some are probably hiding from predators. And some are even laying their eggs in the burrow.”

Surprisingly, Doody says, he and his colleagues found very few mammals using the burrows. With the “massive smell of reptile” in there they may steer clear, he says.

The range of nonmammals using the burrows is “incredible,” especially given the reptiles’ broad appetite, says Sophie Cross, an ecologist at Curtin University in Perth, Australia who was not involved with the research.

“[Monitors] will pretty much eat anything they can catch or dig out from the ground,” she says. “I am surprised that so many animals use these burrows, given a lot of them would be easy prey for a monitor lizard.”

If the smaller residents use the burrows at a different time than the monitors, the two groups might avoid conflict. The monitors appear to lay their eggs over a few weeks and leave, letting them incubate over the eight-month dry season, Doody says.

Given the widespread use of the burrows by wildlife, Doody has concerns about the broader ecological effects of the ongoing cane toad invasion in Australia’s tropical north. Monitor lizards — naïve to the toads’ potent toxins — will eat the amphibians, with lethal consequences. As a result, monitors are rapidly dying, Doody says, and their warrens are filling in, leaving less refuge for other animals using the burrows. “You go from hundreds of animals using a warren system to zero.”

Going forward, Doody wants to investigate why some animals make helical burrows in the first place. The practice is rare, with creatures like beach crabs, some extinct rodents and pocket gophers being some of the only other examples.

Along with the new study, that research may be crucial for changing public perceptions of reptiles, which can be maligned out of fear, Cross says. “It’s great to see research like this highlight how important [reptiles] can be in ecosystems.”

Haptics research aims to digitally capture the sense of touch