This 3.67-million-year-old adult female sports the oldest and most complete set of shoulder blades and collarbones of any ancient hominid. Those fossils also provide the best available model for what the shoulders of the last common ancestor of humans and chimpanzees looked like, say Kristian Carlson, a paleoanthropologist at the University of Southern California in Los Angeles, and his colleagues. Their results provide new insights into how both Little Foot and a human-chimp last common ancestor climbed in trees.

Little Foot belonged to the Australopithecus genus, but her species identity is in dispute (SN: 12/12/18). The shape and orientation of her shoulder bones fall between corresponding measures for humans and present-day African apes, but most closely align with gorillas, Carlson reported April 27 at the virtual annual meeting of the American Association of Physical Anthropologists. His talk was based on a paper published online April 20 in the Journal of Human Evolution.

Little Foot lived roughly half-way between modern times and the estimated age of a human-chimp common ancestor, says paleobiologist David Green of Campbell University in Buies Creek, N.C., a member of Carlson’s team. If that ancient ancestral creature was about the size of a chimp, as many researchers suspect, shoulders resembling those of gorillas would have supported slow but competent climbing, Green says. Gorillas spend much of the time knuckle-walking on the ground. These apes climb trees with all four limbs, reaching up with powerful shoulders and arms to pull themselves along. 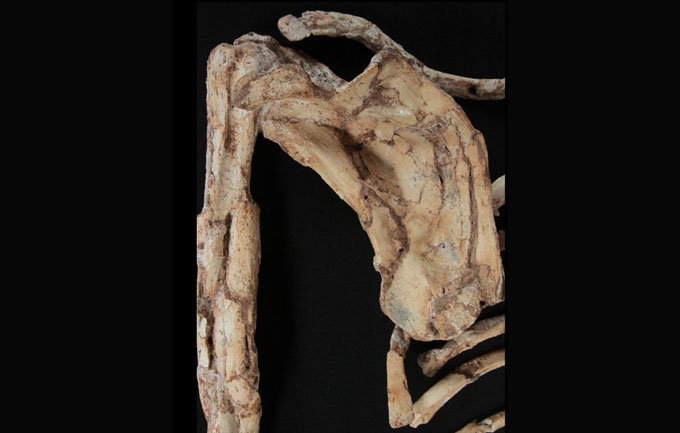 The new analysis makes Little Foot’s shoulders “our best candidate for hypothesizing the appearance of the human-chimp last common ancestor,” says anatomist Susan Larson of Stony Brook University School of Medicine in New York, who wasn’t involved in the research. Ancestral shoulders that supported capable tree climbing would have provided a foundation for the evolution of human shoulders aligned with a two-legged stride and chimp shoulders designed for hanging and swinging from tree branches, she suggested.

In the new study, a digital, 3-D reconstruction of Little Foot’s more complete right shoulder blade was compared with right shoulder blades of chimps, gorillas, orangutans and present-day people. Further comparisons were made with partial shoulder blades of 11 ancient hominids. Those hominids included four South African Australopithecus specimens and East African finds from two members of Lucy’s species, A. afarensis, that date to around 3.3 million and 3.6 million years ago (SN: 10/25/12). Little Foot’s collarbones were compared with those of humans, chimps, gorillas, orangutans and seven ancient hominids.

Carlson’s analysis provides preliminary but still uncertain evidence that Little Foot had the most gorilla-like shoulders of any ancient hominid, says paleoanthropologist Stephanie Melillo of the Max Planck Institute for Evolutionary Anthropology in Leipzig, Germany. Melillo, who did not participate in the new study, considers it most striking that Little Foot shares many shoulder similarities with the other Australopithecus fossils studied by Carlson’s team.

Some researchers consider a 4.4-million-year-old Ardipithecus ramidus skeleton, dubbed Ardi, the best hominid model for a human-chimp last common ancestor (SN: 12/31/09). Ardi could have moved slowly in trees while holding onto branches above her head, in a manner unlike any modern ape, they contend. But Ardi’s remains lack shoulder blades and collarbones.