Joshua Smith has been diving in kelp forests in Monterey Bay along the central coast of California since 2012. Back then, he says, things looked very different. Being underwater was like being in a redwood forest, where the kelp was like “towering tall cathedrals,” says Smith, an ecologist at the University of California, Santa Cruz. Their tops were so lush that it was hard to maneuver a boat across them.

No longer. The once expansive kelp forests are now a mosaic of thinner thickets interspersed with barrens colonized by sea urchins. And those sea urchins have so little to eat, they aren’t even worth the effort of hungry sea otters — which usually keep urchins in check and help keep kelp forests healthy, Smith and his colleagues report March 8 in the Proceedings of the National Academy of Sciences.

A similar scene is playing out farther north. A thick kelp forest once stretched 350 kilometers along the northern California coast. More than 95 percent of it has vanished since 2014, satellite imagery shows. Once covering about 210 hectares on average, those forests have been reduced to a mere 10 hectares scattered among a few small patches, Meredith McPherson, a marine biologist also at UC Santa Cruz, and her colleagues report March 5 in Communications Biology. Like the barrens farther south, the remaining forests are now covered by purple sea urchins. 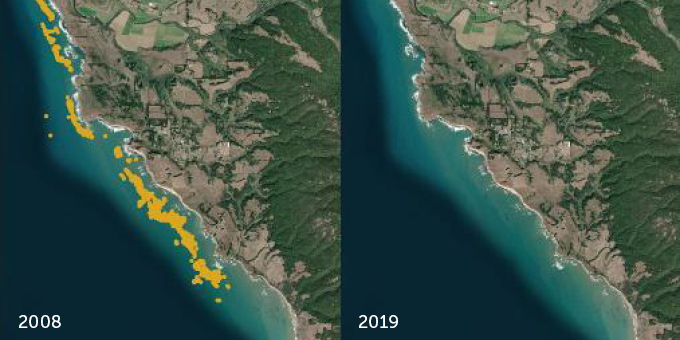 Satellite images in 2008 (left) and 2019 (right) of a section of the northern California coastline reveal a 95 percent reduction in the area covered by underwater kelp forests (yellow).Meredith McPherson 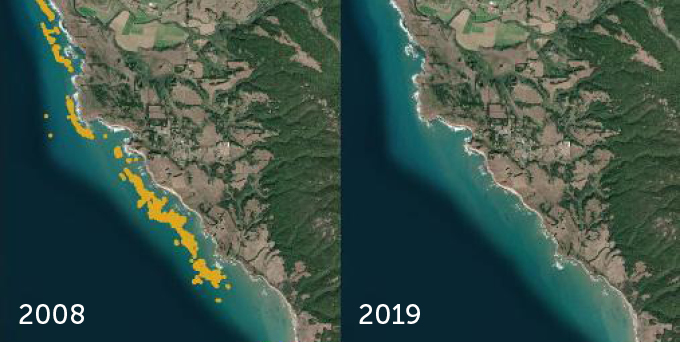 Satellite images in 2008 (left) and 2019 (right) of a section of the northern California coastline reveal a 95 percent reduction in the area covered by underwater kelp forests (yellow).Meredith McPherson

Together, the two studies reveal the devastation of these once resilient ecosystems. But a deeper dive into the cascading effects of this loss may also provide clues to how at least some of these forests can bounce back.

California’s kelp forests, which provide a rich habitat for marine organisms, got hit by a double whammy of ecological disasters in the past decade, says UC Santa Cruz ecologist Mark Carr. He is a coauthor on the Communications Biology paper who has mentored both McPherson and Smith.

The second wallop was a marine heat wave so big and persistent it was nicknamed “The Blob” (SN: 12/14/17). While kelp forests have been resilient to warming events before, this one was so extreme it spiked temperatures in many parts of the Pacific to 2 to 3 degrees Celsius above normal (SN: 1/15/20).

Kelp thrives in cold and nutrient rich water. As its growth slowed in the warmer water, less kelp drifted into the crevices of the reefs where sea urchins typically lurk. With a key predator gone and a newfound need to forage for food rather than waiting for it to come to them, urchins emerged and turned the remaining kelp into a giant buffet.

For the northern California kelp forests, the shift could spell doom for two reasons. The dominant species growing there is bull kelp (Nereocystis leutkeana). It dies each winter to return again in the spring, and the changes are making it more difficult to bounce back year after year.  In comparison, one of the main kelp species in Monterey Bay is giant kelp (Macrocystis pyrifera), which lives for many years, making it a bit more resilient. 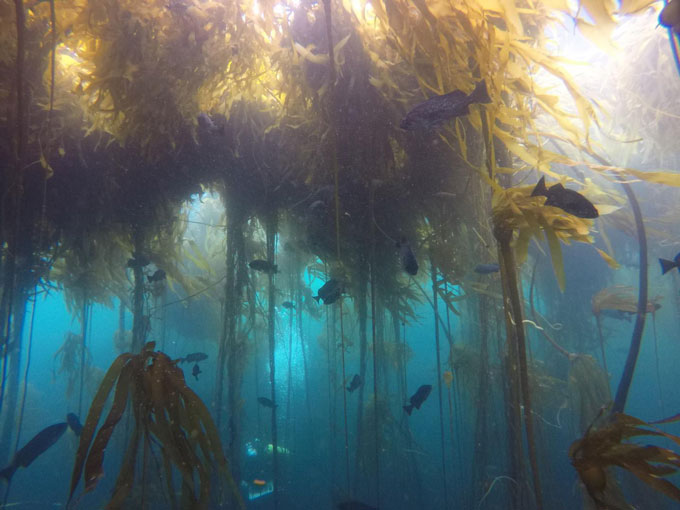 Bull kelp (Nereocystis leutkeana), seen here growing at Pescadero Point near Carmel-by-the-Sea, Calif., becomes the dominant species of kelp growing along the northern California coast. A marine heat wave and loss of a sea urchin predator has led to a massive loss of bull kelp in that region.Steve Lonhart/NOAA, MBNMS

The kelp forests in the north also lack an urchin predator common farther south: sea otters. Those sea otters are what’s providing a glimmer of hope in Monterey Bay. Smith and his colleagues wondered how the bonanza of sea urchins was affecting the otters. They found that sea otters were eating three times as many sea urchins as they were before 2014, but they were being picky. They avoided the more populous urchin barrens, instead feasting only on urchins in the remaining patches of kelp. That’s because the barrens offer only a poor diet of scraps, leaving the urchins there essentially hollow on the inside. “Zombies,” Smith calls them.

The nutrient-rich urchins in the healthy kelp make a far better sea otter snack. And by zeroing in on those urchins, the otters keep the population in check, preventing urchins from scarfing up the remaining kelp.

Simply transplanting sea otters to new locations may create new challenges. That’s what happened off the Pacific Coast of Canada. Kelp forests there rebounded, but the otters competed with humans, especially Indigenous communities, that rely on the same food sources (SN: 6/11/20).

“The community on the North Coast is a very natural resource–dependent community, and this will impact them,” says Marissa Baskett, an ecologist at the University of California, Davis.

And there’s a lot of work to do to figure out how to bring back sunflower sea stars, now a critically endangered species. Nailing down the cause of the wasting syndrome, which is still unknown, will be crucial to recovery efforts.

Even so, understanding these interactions can provide clues to how to help restore the lost kelp forests, Baskett says. “These findings can inform restoration efforts aimed at recovering kelp forests and anticipating the effects of future marine heat waves.”

The Smiths fans are confused by this new film trailer