Killer whales are skilled assassins, hunting everything from herring to great white sharks. Now, for the first time, scientists witnessed a pod of killer whales bring down the world’s largest animal: an adult blue whale.

“This is the biggest predation event on the planet,” says Robert Pitman, a cetacean ecologist at Oregon State University Marine Mammal Institute in Newport. “We haven’t seen things like this since dinosaurs were here, and probably not even then.”

It’s been debated for decades whether killer whales, or orcas (Orcinus orca), are capable of preying on full-grown large whales. Past accounts have described attempted attacks on blue whales, but no one had observed orcas complete the job until March 21, 2019.

It was “a really ominous, bad weather day” off the Western Australia coast, says John Totterdell, a biologist at Cetacean Research Centre in Esperance, Australia. Totterdell and his colleagues, who recount their whale tale January 21 in Marine Mammal Science, were still an hour out from their usual orca-observing site when they slowed to remove some debris from the water. In the pouring rain, they almost missed the splashing — and the telltale dorsal fins of killer whales.

“Within seconds, we realized they were attacking something big. Then we realized, oh my, it was a blue whale,” says Totterdell.

The team had stumbled upon a dozen orcas assailing an adult blue whale (Balaenoptera musculus), estimated at between 18 and 22 meters long. Tooth marks crisscrossed its flank, and its dorsal fin was mostly bitten off. The most brutal injury was on its face: The flesh of the whale’s snout was ripped away along the top lip, exposing bone. Three orcas slammed into the whale’s side like a battering ram, as another orca began feeding on its tongue. The blue whale finally died about an hour after the research team arrived. 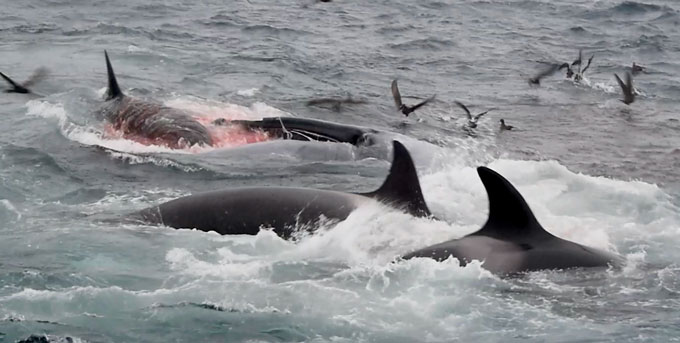 An orca (upper left) maneuvers itself into a blue whale’s open jaw and feasts on its tongue as two other orcas continue the assault on the whale’s flank. The attack, captured on video, marks the first time scientists have seen orcas kill an adult blue whale.CETREC, Project Orca

The coordinated attack was consistent with methods observed during other orca takedowns of large whales. Orcas will target the fins, tail and jaw, possibly to slow the whale. They will also push the whale’s head underwater to prevent it surfacing for air, while others below push it up so it can’t dive. “These are practiced large-whale hunters,” says study coauthor Pitman. “They know how to do this.”

Scientists have documented some whale behaviors — like southern right whales whispering to calves and beaked whales diving silently in sync — to evade orcas, but blue whales don’t have many defense mechanisms besides their enormous size (SN: 7/11/19; SN: 2/6/20).

The new paper describes two other successful attacks, carried out by many of the same orcas, that killed a blue whale calf in 2019 and a juvenile in 2021. All three events happened along the continental shelf drop-off offshore of Bremer Bay, where migrating blue whales pass by a population of over 150 orcas, possibly the largest aggregation of orcas in the world.

Caught on tape for the first time, a dozen orcas relentlessly attack a blue whale as it attempts to flee. The orcas’ tactics — ripping off strips of flesh, ramming the flank, consuming the tongue — are consistent with observed attacks on other large whales.

Despite their brutality, orca hunts are family affairs. Female orcas often lead the charge, with calves watching closely and sometimes participating “like excited little puppies,” says Pitman. The hunters will even share the spoils with their extended family; Totterdell observed about 50 orcas picnicking on the blue whale in the hours after its death.

It’s uncertain if large whales played a significant role in orca diets before whaling removed nearly 3 million whales from the oceans, including as many as 90 percent of blues whales — but it’s definitely possible, says Pete Gill, a whale ecologist at Blue Whale Study in Narrawong, Australia. Orcas and blue whales have been interacting for tens of thousands of years, he says. “I imagine they have had this dynamic for quite a long time.”

Why The CHIPS and Science Act Is a Climate Bill

How balloons could one day detect quakes on Venus