When it comes to finding fossils of very ancient microbial life — whether on Earth or on other worlds, such as Mars — the odds are just not in our favor.

The finding is “at the very least a cautionary tale,” says study author Julie Cosmidis, a geomicrobiologist at the University of Oxford.

Tiny, often enigmatic structures found in some of Earth’s oldest rocks, dating back to more than 2.5 billion years, can offer tantalizing hints of the planet’s earliest life. And the hunt for ever-more-ancient signs of life on Earth has sparked intense debate — in part because the farther back in time you go, the harder it is to interpret tiny squiggles, filaments and spheres in the rock (SN: 1/3/20). One reason is that the movements of Earth’s tectonic plates over time can squeeze and cook the rocks, deforming and chemically altering tiny fossils, perhaps beyond recognition.

But an even more pernicious and contentious problem is that such tiny filaments or spheres may not be biological in origin at all. Increasingly, scientists have found that nonbiological chemical processes can create similar shapes, suggesting the possibility of “false positives” in the biological record.

One such discovery led to the new study, Cosmidis says. A few years ago, she and others were trying to grow bacteria and make them produce sulfur. “We were mixing sulfides with organic matter, and we started forming these objects,” she says. “We thought they were formed by the bacteria, because they looked so biological. But then we realized they were forming in laboratory tubes that happened to have no bacteria in them at all.”

That led her to wonder about such processes happening in the rocks themselves. So she and others decided to examine what would happen if they tried to re-create the early formation stages of chert, a kind of compact, silica-rich rock common on the early Earth. “Microfossils are often found in chert formations,” says study coauthor Christine Nims, a geobiologist now at the University of Michigan in Ann Arbor. “Anything hosted in [chert] will be well-preserved.”

Chert forms out of silica-rich water; the silica precipitates out of the water and accumulates, eventually hardening into rock. Cosmidis, Nims and colleagues added sulfur-containing bacteria called Thiothrix to solidifying chert to see what might happen during actual fossilization. To other chert samples, they added sulfur-containing “biomorphs,” spheres and filaments made of tiny crystals but shaped like bacteria.

At first, nanoparticles of silica encrusted the bacteria and the biomorphs, Nims says. But after a week or so, the bacteria started to deform, their cells deflating from cylinders into flattened, unrecognizable ribbons as the sulfur inside the cells diffused out and reacted with the silica outside the cells, forming new minerals.

The biomorphs, on the other hand, “had this impressive resiliency,” she says. Although they, too, lost sulfur to the surrounding solution, they kept their silica crust. As a result, “they kept their shape and showed very little change over time.” That endurance suggests that enigmatic structures found in the early rock record have a better chance of being pseudofossils, rather than actual fossils, the team says. 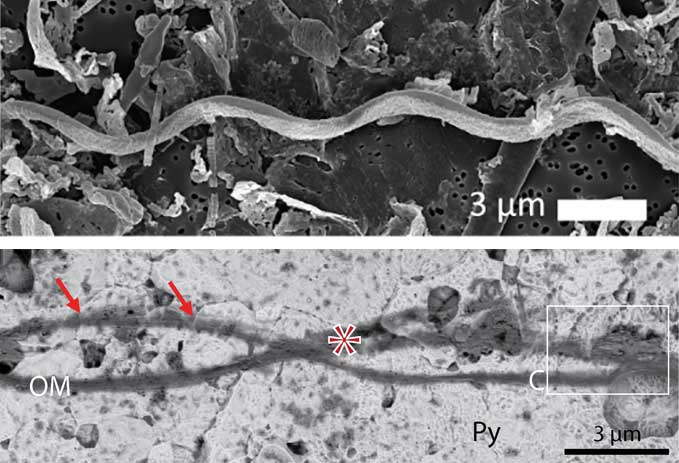 The idea that once-living creatures are harder to preserve makes sense, says Sean McMahon, an astrobiologist at the University of Edinburgh who was not involved in the new study. “It’s not totally surprising,” he says. “We know that biomass does tend to break down quite quickly.”

In fact, scientists have known for centuries that certain chemical reactions can act as “gardens” that “grow” strange-shaped mineral objects, twisting into tubes or sprouting branches or otherwise mimicking the weirdness of life. “There’s a complacency about it, a misconception that we kind of know all this and it’s already been dealt with,” McMahon says.

Strategies to deal with this conundrum have included looking for particular structures — such as mound-shaped stromatolites — or chemical compounds in a potential fossil that are thought to be uniquely formed or modified by the presence of life (SN: 10/17/18). Those criteria are the product of decades of field studies, through which scientists have amassed a vast reference dataset of fossil structures, against which researchers can compare and evaluate any new discoveries.

“Anything we find, we can look at through that lens,” McMahon says. But what’s lacking is a similarly rich dataset for how such structures might form in the absence of life. This study, he says, highlights that attempts “to define criteria for recognizing true fossils in very ancient rocks are premature, because we don’t yet know enough about how nonbiological processes mimic true fossils.”

It’s an increasingly urgent problem with rising stakes, as NASA’s Perseverance rover is about to set down on Mars to begin a new search for traces of life in ancient rocks (SN: 7/28/20), he adds. “Paleontologists and Mars exploration scientists should take [this study] very seriously.”

Boy, 9, in a coma after crashing while being towed in a sledge by his dad’s jeep