AN ENORMOUS prehistoric bone found on a British beach could have belonged to the biggest elephant ever to walk the Earth.

Brothers Luke and Joe Ferguson discovered the giant fossil which is believed to have come from either an ancient “straight-tusked elephant” or a woolly mammoth. 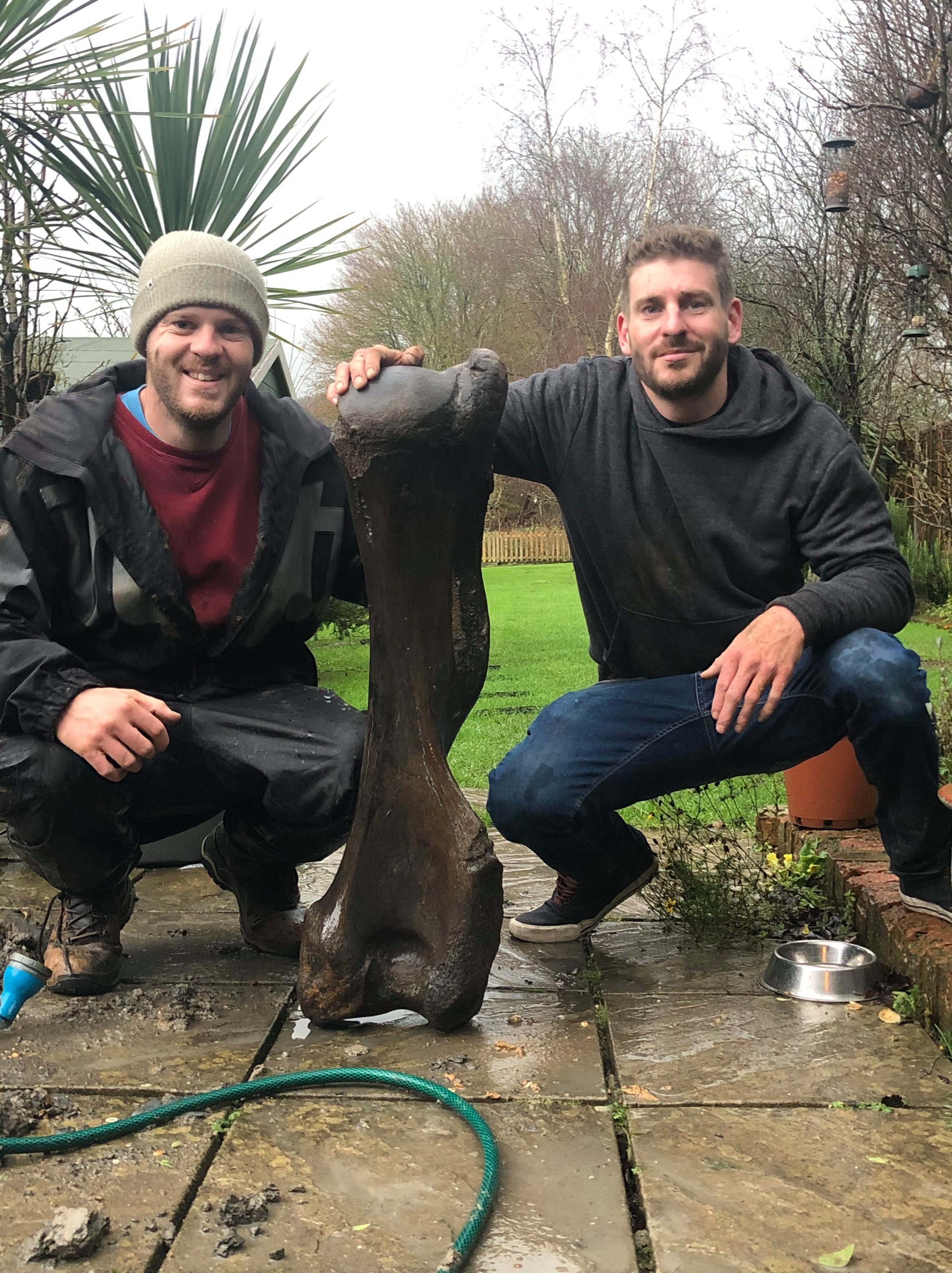 Brothers Luke and Joe Ferguson discovered a giant fossil on the Isle of WightCredit: Solent News

A fossil expert said the extraordinary find could be up to 125,000 years old.

The pair, who have been collecting fossils since childhood, found it sticking up out of shingle “like a giant chicken bone” after a recent cliff fall on the south-west coast of the Isle of Wight, near Brighstone Bay.

Joe, 28, said: “It was like any normal day. We usually go down to the south coast beaches to find dinosaur fossils. We have been doing it since we were kids.

“It is honestly the find of a lifetime. It doesn’t get better than that.” 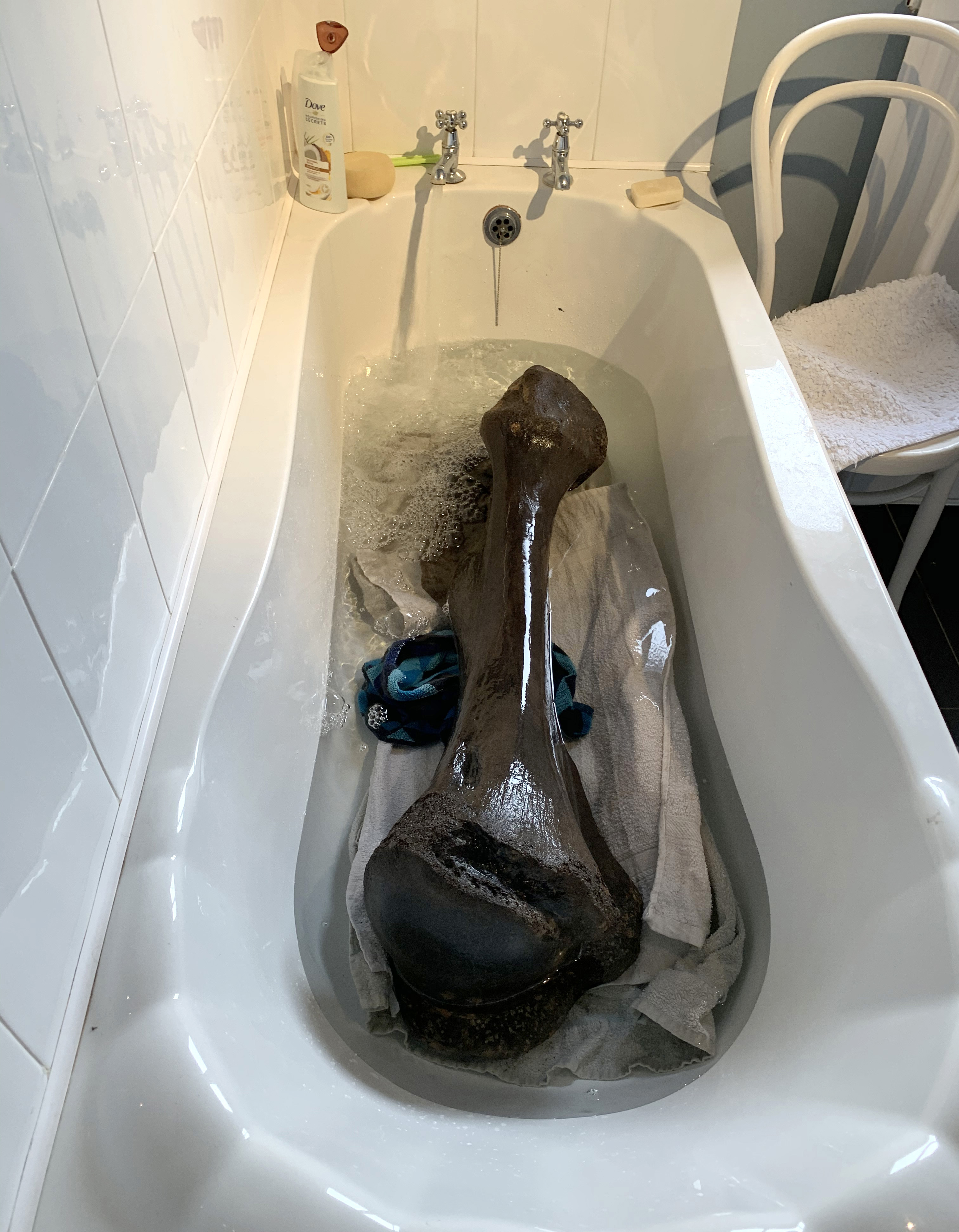 Experts believe the bone is up to 125,000 years oldCredit: solent news

Dr Martin Munt, curator and general manager of the Dinosaur Isle Museum in Sandown on the Isle of Wight, said the fossil appeared to be a humerus from a straight-tusked elephant, or possibly a mammoth.

Today, the largest land mammal is the African elephant, which stands around 3.3 metres tall at the shoulder (10ft 10ins) and weighs up to seven tonnes.

Some straight-tusked elephants, however, may have reached up to 4.5 metres tall (14ft 5ins) and could have been twice as heavy, tipping the scales at more than 14 tonnes. 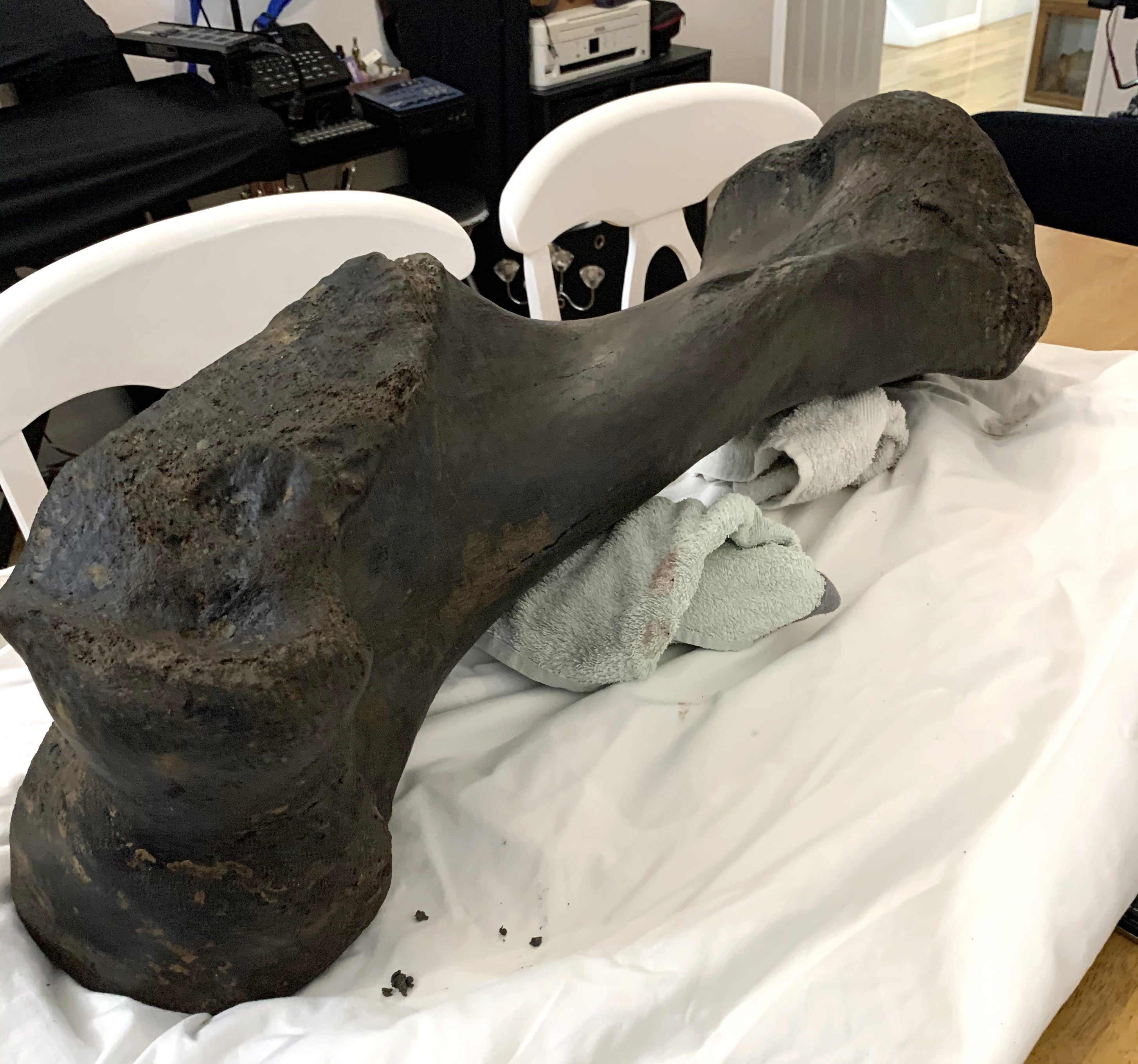 The ancient bone is believed to have come from either an ancient “straight-tusked elephant” or a woolly mammothCredit: solent news

This would make them the largest land mammal ever to have existed.

Joe, added: “A straight-tusked elephant would be even rarer than anything else.

“It’s the biggest elephant ever recorded. This definitely ranks at the top of our discoveries. It’s insane how huge it is. It’s more than three-foot long and probably weighs about 30kg.

“We’re just preserving it now leaving it to dry slowly and getting all the salt water out of it. 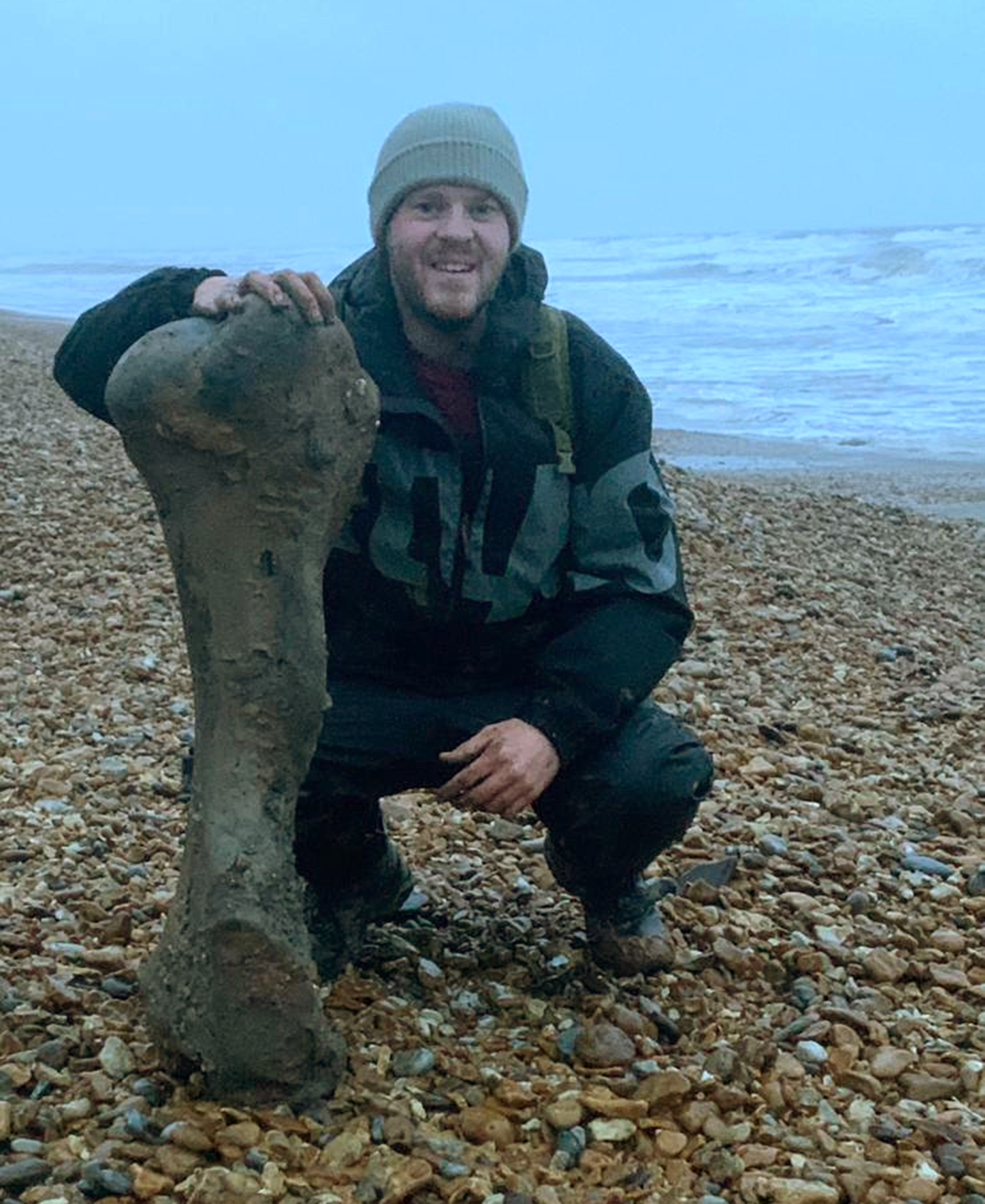 It’s three-foot long and weighs around 30 kilos, according to JoeCredit: solent news

“We normally do that for delicate fossils, but it actually isn’t very brittle at all. It’s in really good condition.”

Joe works as a boat builder on the island while his brother, Luke, 30, works in construction. Joe said his mum, Maria, 57, was delighted when she heard about their latest find.

He added: “Our mum, couldn’t believe it. She got us into fossil hunting and she’s been waiting to find something like this her whole life.”

Joe explained they found the fossil on January 27 after it was uncovered following a recent spell of stormy weather. 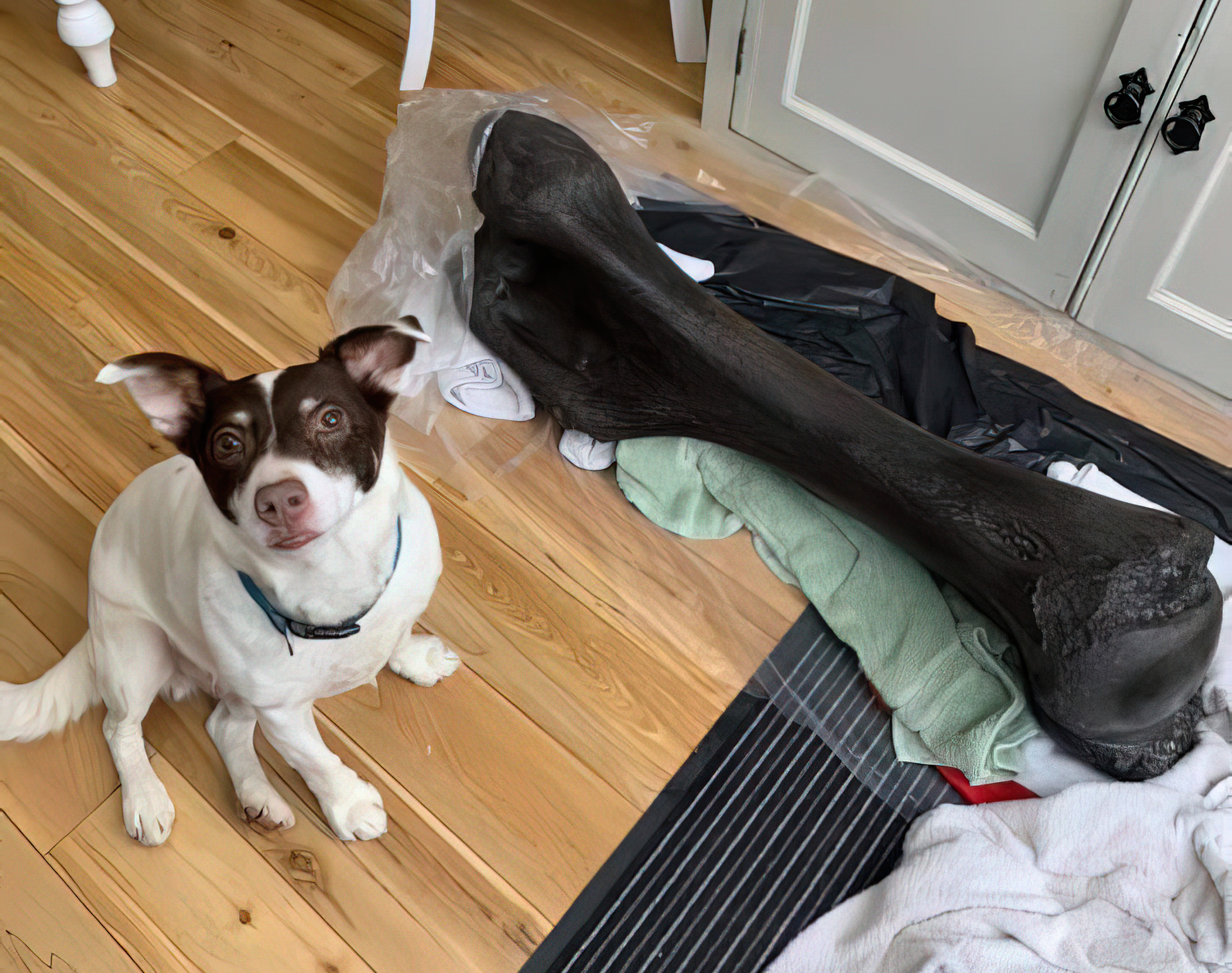 The brothers will have to wait until lockdown ends before they can have the fossil properly identifiedCredit: solent news

He continued: “Literally half of it was just sticking out of the shingle following a recent cliff fall. It was just sat there like a giant chicken bone.

“You couldn’t miss it. It was definitely displaced during the bad weather. I couldn’t believe my eyes. I knew it was a fossil ­- definitely a leg – straight away.

“We’ve been going down there every day since looking for more. We go out when the tides are right.”

The brothers, from Carisbrooke on the Isle of Wight, will have to wait until lockdown ends before they can have the fossil properly identified.

In other news, lost Bronze Age graves have been discovered near the site of Stonehenge after 4,000 years.

The mystery over who built Stonehenge may finally have been solved after experts uncovered “Britain’s first city” a mile away.

What do you make of the mammoth find? Let us know in the comments!

Octopuses drilled into clamshells at least 75 million years ago