FLYING taxis are set to be trialled in Bristol in just two years time.

People in the UK city could be hitching a ride on what are essentially large passenger drones as early as 2023.

The drones could fly people over traffic

The flying taxi project has just got backing from the British Government.

Vertical Aerospace, the company behind the tech, has received a £2.5million grant to test the feasibility of the project.

The creators think 2023 is a fair target for trialling the flying vehicles.

Vertical Aerospace is a Bristol-based company and it will be working with the West of England Combined Authority and another firm called Atkins. 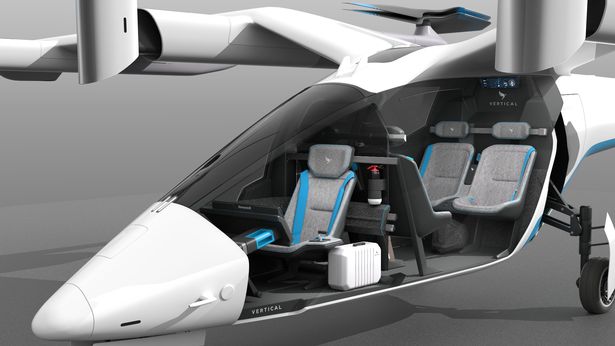 The air taxi will have a pilotCredit: Vertical Aerospace

The project received partial funding from the Government’s Future of Flight Challenge.

This is aiming to find greener and more effective ways to travel that will avoid congestion and help to save the planet.

According to Bristol Live, the project will look into public perceptions, demand for a flying taxi service and should eventually include test flights.

Bristol Airport will be the ‘principal support airport’ for the air taxis.

There are hopes the aircraft could also bring new jobs to the area.

Each air taxi would have a pilot and, by the looks of current designs, up to four passengers.

Advanced Air Mobility Lead at Atkins, James Richmond told Bristol Live: “As we look to the future of travel, it’s now more important than ever that we begin exploring more sustainable methods of transport within our increasingly populated cities.”

He added: “This an important and tangible step towards making Advanced Air Mobility a reality, and by demonstrating that we can provide a case for air taxis, we could begin trialling these services as early as 2023.”

We have reached out to Vertical Aerospace for comment.

The UK’s drone code for small personal drones – how should you fly?

Here’s the official advice from the CAA…

In other news, a high speed train that aims to reach speeds of nearly 400 miles per hour has been unveiled in China.

Samsung has created a ‘cockpit of the future’ for semi-driverless cars – and it looks seriously cool.

And, Tesla’s now have a full driverless mode.