THIS is the dramatic moment amateur astronomers saw a mysterious object slamming into Jupiter.

An enthusiast in Germany – 382.76million miles away – captured the instant a bright flash of light was spotted on the planet.

This is the amazing moment a flash of light was seen on JupiterCredit: Twitter

Astronomer Harald Paleske was watching the shadow of Jupiter’s moon, Io, create a solar eclipse when he spotted the impact.

He told Space Weather: “A bright flash of light surprised me.

“It could only be an impact.”

The event is only the eighth impact on official record.

Mr Paleske said he returned to each frame in the hope of determining what had caused the flash.

And he realised the light was inside Jupiter’s atmosphere, remaining visible for two seconds.

That rules out the possibility that it was a satellite floating across the planet.

Experts believe Jupiter could be hit with hundreds of asteroids every year.

The planet – which is the largest in the solar system – acts as a blockade to stop the objects striking Earth.

Capturing such an event on film is rare – although another amateur astronomer based in Brazil also documented the impact earlier this week.

“To my surprise, in the first video I noticed a different glow on the planet,” he told Space.com.

“I didn’t pay much attention to it as I thought it might be something related to the parameters adopted, and I continued watching normally.

“So as not to stop the captures in progress for fear that weather conditions would worsen, I didn’t check the first video.

“I checked the result only on the morning of September 14, when the program alerted me to the high probability of impact and verified that there was indeed a record in the first video of the night.”

Marc Delcroix of the French Astronomical Society confirmed the event seen in the footage is an impact.

The first recorded impact on Jupiter was the Comet Shoemaker-Levy 9 (SL9). It hit in July 1994.

Jupiter is a source of wonder to both professional astronomers and those simply with a keen interest in the planets.

Last month, scientists based at the University of Leicester joined experts at NASA to create heat maps of the planet.

They found intense auroras are driving extreme temperatures after wondering how a planet so far from the sun reaches temperatures of 425C.

And the team discovered charged particles escape from Jupiter’s volcanic moon Io and are captured by the planet’s magnetic field, creating ultraviolet auroras. 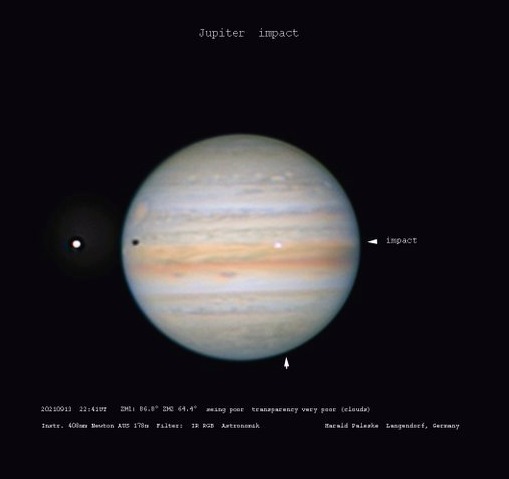 Astronomers in Germany and Brazil spotted the moment of impact while observing an eclipseCredit: Twitter