Don’t dim the lights. A survey using more than 6,000 chickens across Florida shows that low levels of light pollution may increase the risk for West Nile virus exposure, researchers report March 24 in Proceedings of the Royal Society B.

Meredith Kernbach, a disease ecologist at the University of South Florida in Tampa, had previously shown that low light at night increased the time that sparrows infected with West Nile were capable of passing on the disease (SN: 1/19/18). She and her colleagues wanted to know if light pollution might also increase the disease’s natural spread in the suburbs.

Cue the sentinel chickens (SN: 4/9/19). The team coupled four years of data from these chickens, kept in coops across the state to monitor the spread of diseases, with a world atlas of artificial night sky brightness. Chickens tested positive for antibodies to West Nile virus more often when there was a little bit of light than in bright light or no light at all, the data showed. 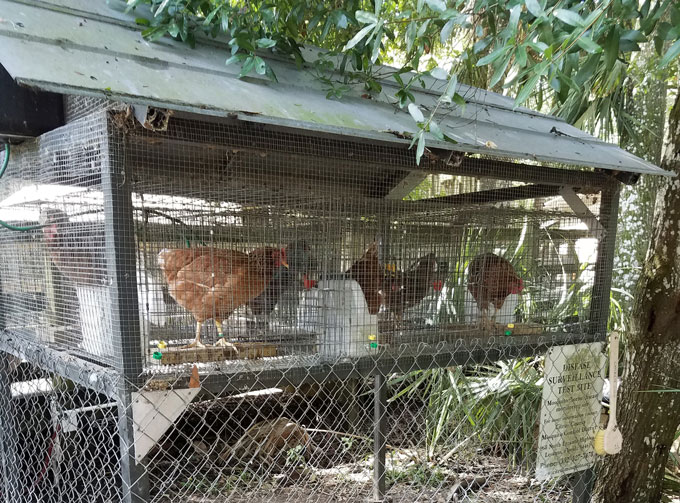 They may not seem like heroes, but these chickens are standing noble sentry against diseases such as West Nile virus in Florida. Blood tests keep track of any diseases that might present a danger to humans.Thomas Unnasch/University of South Florida

Obviously, chickens getting mosquito bites aren’t humans getting West Nile virus. But the findings could help explain why West Nile virus, the most common mosquito-borne disease in the continental United States, is so closely associated with human environments.

The researchers showed sky brightness was a better predictor of West Nile exposure than human density or paved surfaces — two other environmental factors thought to predict spread. But this study has only begun to shed light on why this happens, Kernbach notes. “We have a reason to look at this now and …understand what is it about light pollution that’s driving this.”

Games Inbox: What will be the next big Nintendo Switch game?