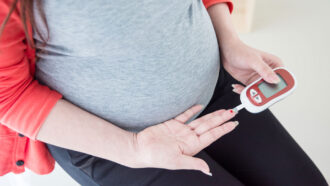 Diabetes brought on by pregnancy might set a woman up for heart trouble later on, even if her blood sugar levels snap back to normal. That finding, from a large, long-term study, suggests that doctors should pay careful attention to the hearts of people who previously had gestational diabetes.

The results, published online February 1 in Circulation, come from data collected by the CARDIA Study, a project designed to track heart health in young adults in the United States. Starting in 1985, CARDIA enrolled equal numbers of Black and white people, ages 18 to 30, from four cities. Following these people for 25 years, researchers looked for coronary artery calcification, or CAC, a hardening of blood vessels that can signal future heart disease.

More than a thousand participants gave birth during the study. Of these women, 139 had gestational diabetes, an often-temporary condition in which blood sugar levels spike. About a quarter of women who had this pregnancy complication — 34 women — went on to have CAC, even when post-pregnancy blood sugar levels normalized, researchers report. A smaller proportion of women who hadn’t had gestational diabetes — 149 of 994, or about 15 percent — went on to have CAC.

Although the link between gestational diabetes and future CAC is disheartening, “the majority of women with gestational diabetes do not develop coronary artery calcification,” says Khadijah Breathett, a cardiologist at the University of Arizona College of Medicine in Tucson who was not involved with the study. Still, the results highlight the importance of keeping blood sugar under control, she says.

Girl, 9, pepper-sprayed by police after ‘threatening to kill herself’