CHINA’S Mars rover has landed on the Red Planet after a treacherous descent through the Martian atmosphere using a parachute in “seven minutes of terror”.

Zhurong, named after a Chinese mythical fire god, arrives a few months behind America’s latest probe to Mars – Perseverance – sparking a new space race with the US. 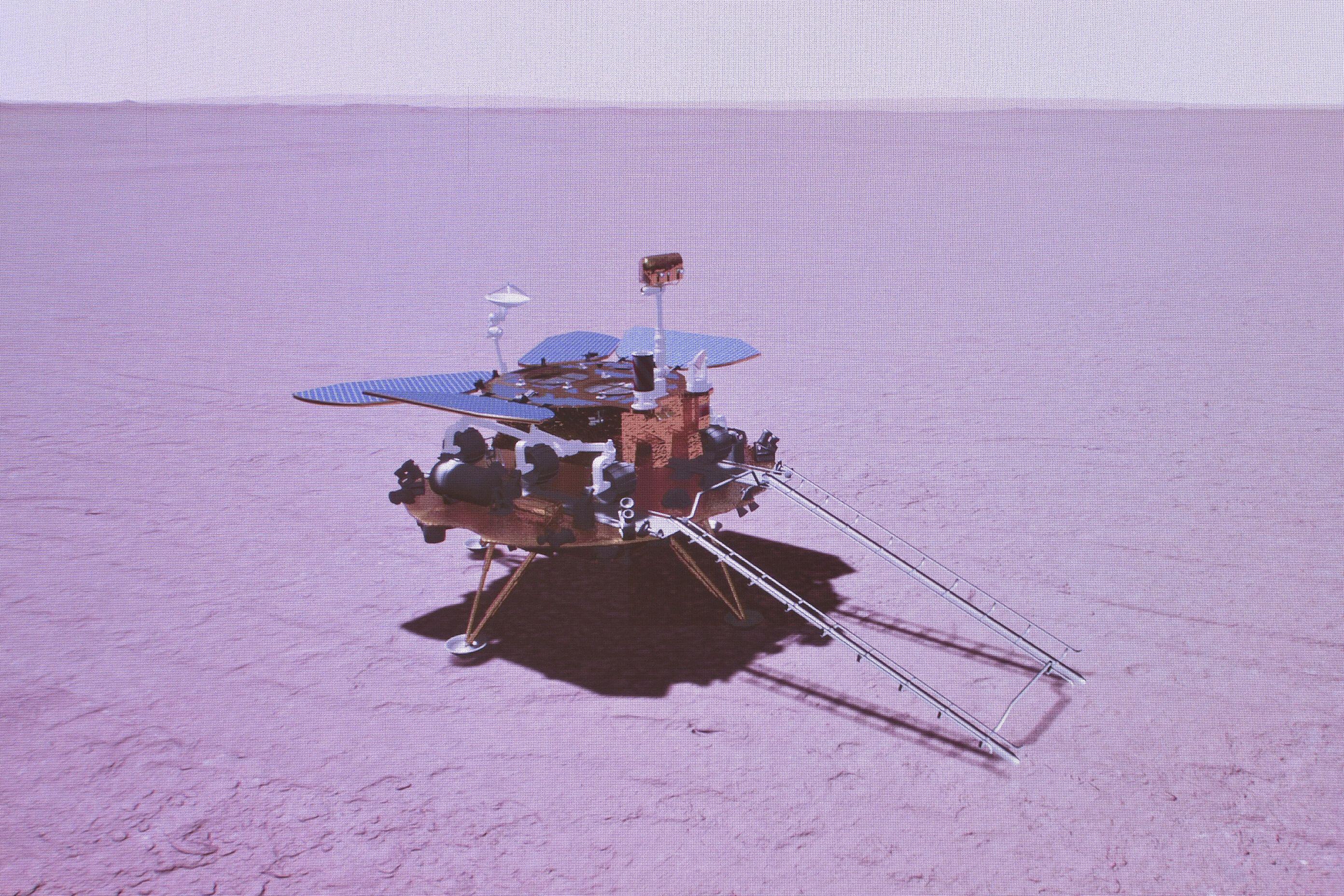 The lander carrying China’s first Mars rover has touched down on the red planetCredit: Alamy 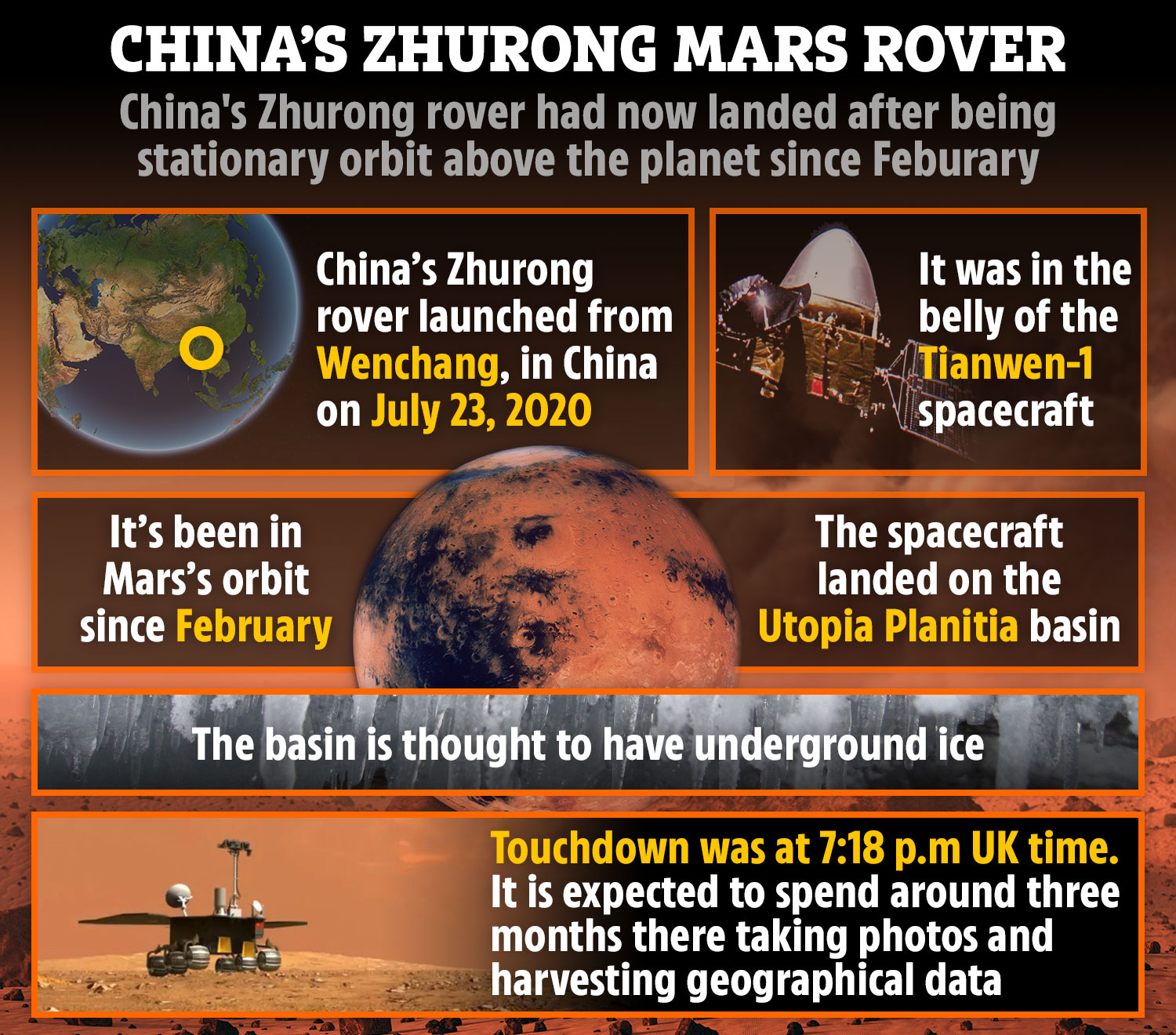 The six-wheeled solar-powered rover is on a quest to collect and analyse rock samples from Mars’ surface.

The landing was a nail-biter for the China National Space Administration (CNSA), with state media describing the process of using a parachute to slow descent and buffer legs as “the most challenging part of the mission”.

It is expected to spend around three months there taking photos and harvesting geographical data.

The complicated landing process is called the “seven minutes of terror” because it happens faster than radio signals can reach Earth from Mars, meaning communications are limited. 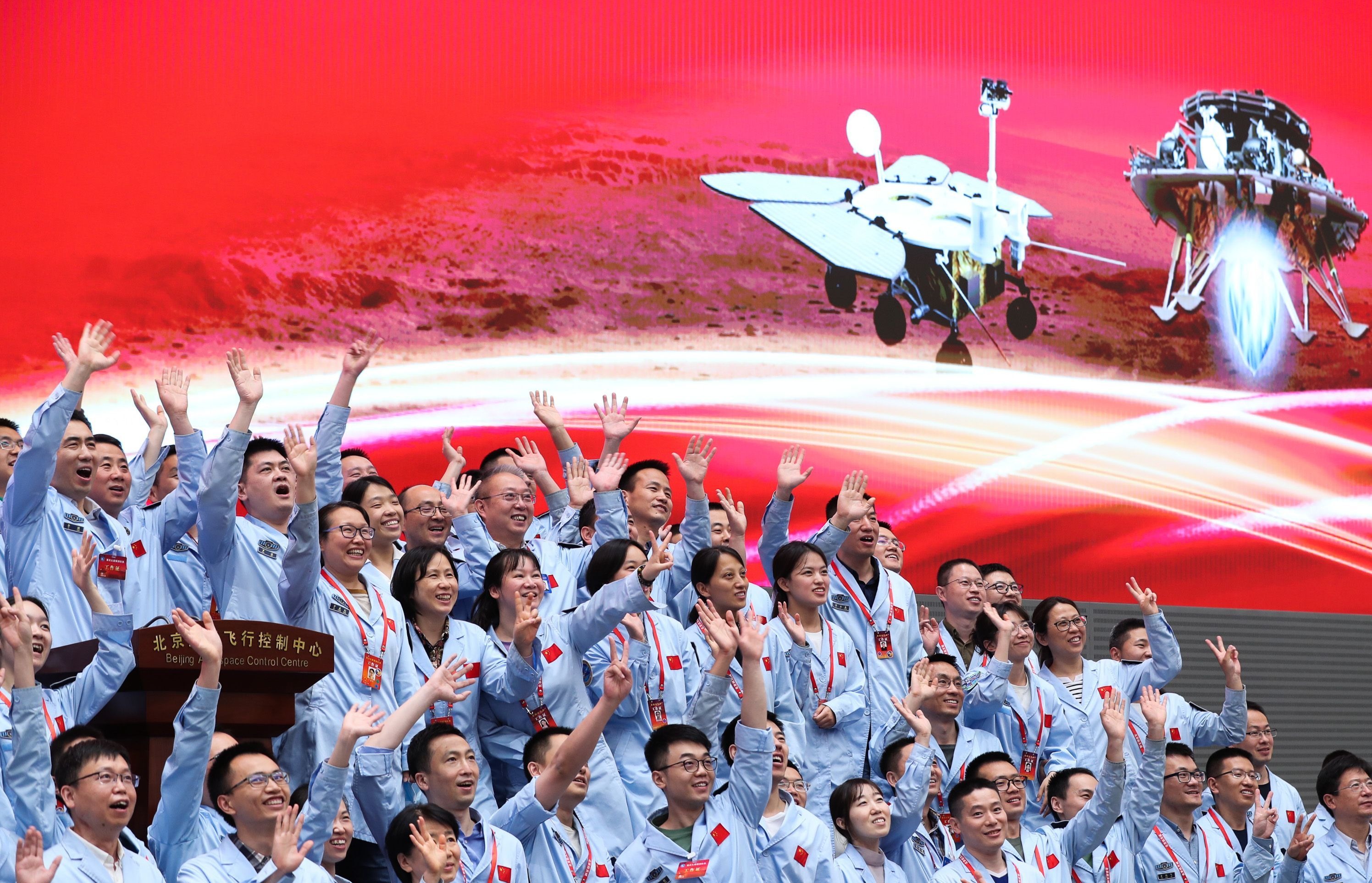 Celebrations at the Beijing Aerospace Control Center after the successful landingCredit: Rex 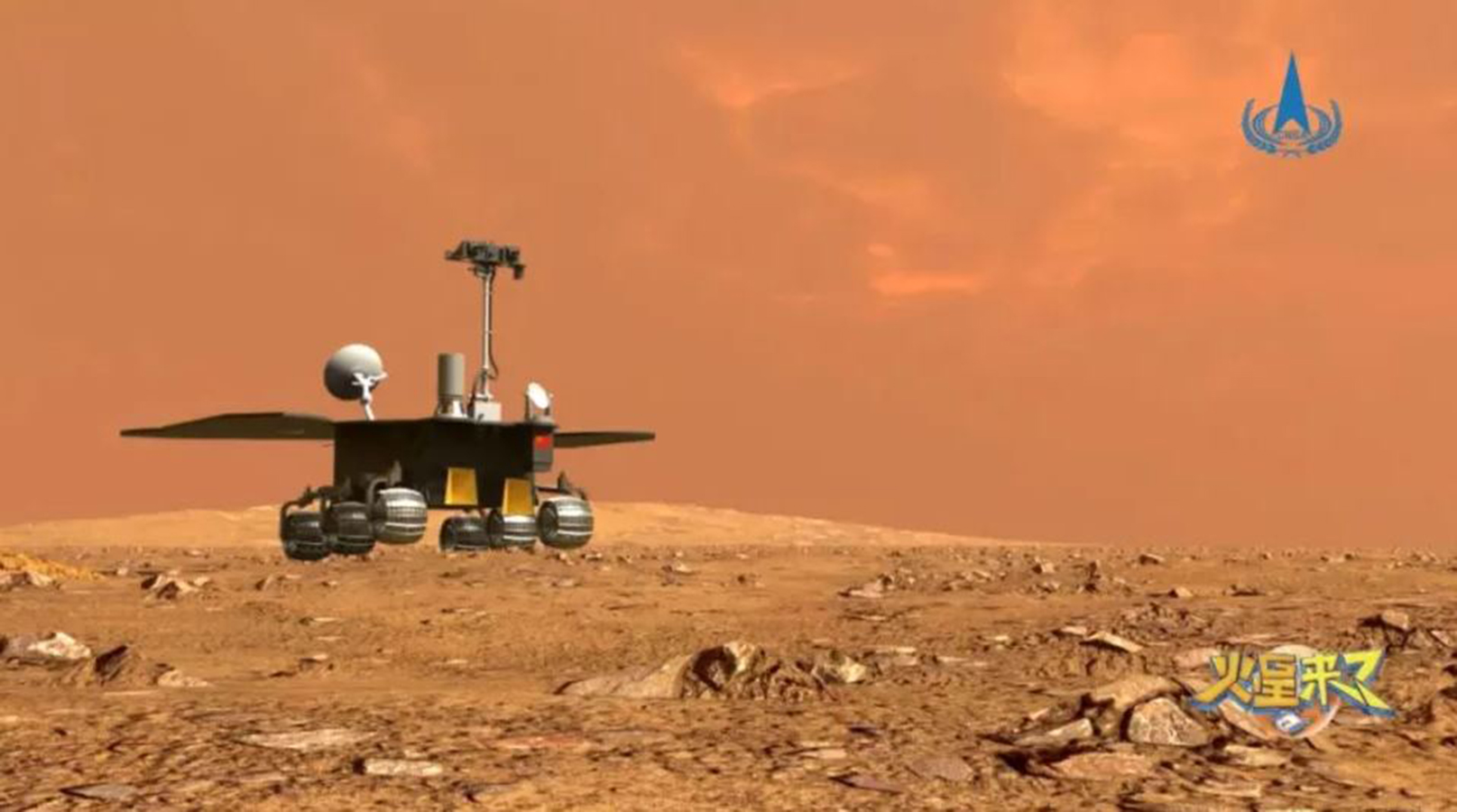 This illustration shows what the rover should look like on MarsCredit: China National Space Administration 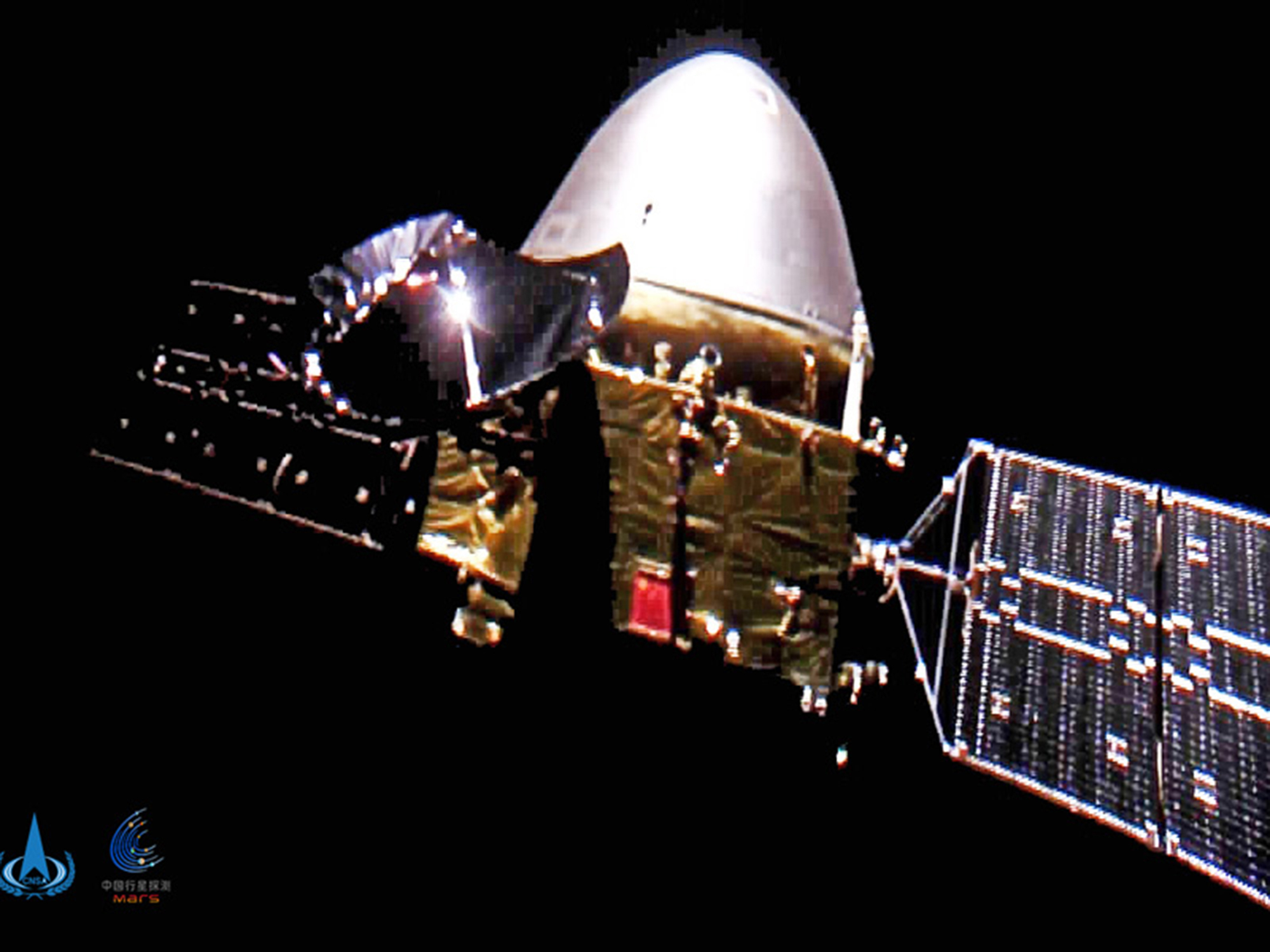 The rover had been inside China’s Tianwen-1Credit: AP

Chen Lan, an independent analyst specialising in China’s space programme, said: “The distance was too far away that the spacecraft has to do it totally by itself.

“If there was something wrong, people on the Earth have no way to help.”

It reached speeds of around 12,000 miles per hour and scientists lost connection with it for around 10 minutes.

It landed in a spot called the Utopia Planitia basin, which is said to contain ice deposits.

The rover had been stowed away in the belly of China’s Tianwen-1 spacecraft that’s also been orbiting Mars since February. 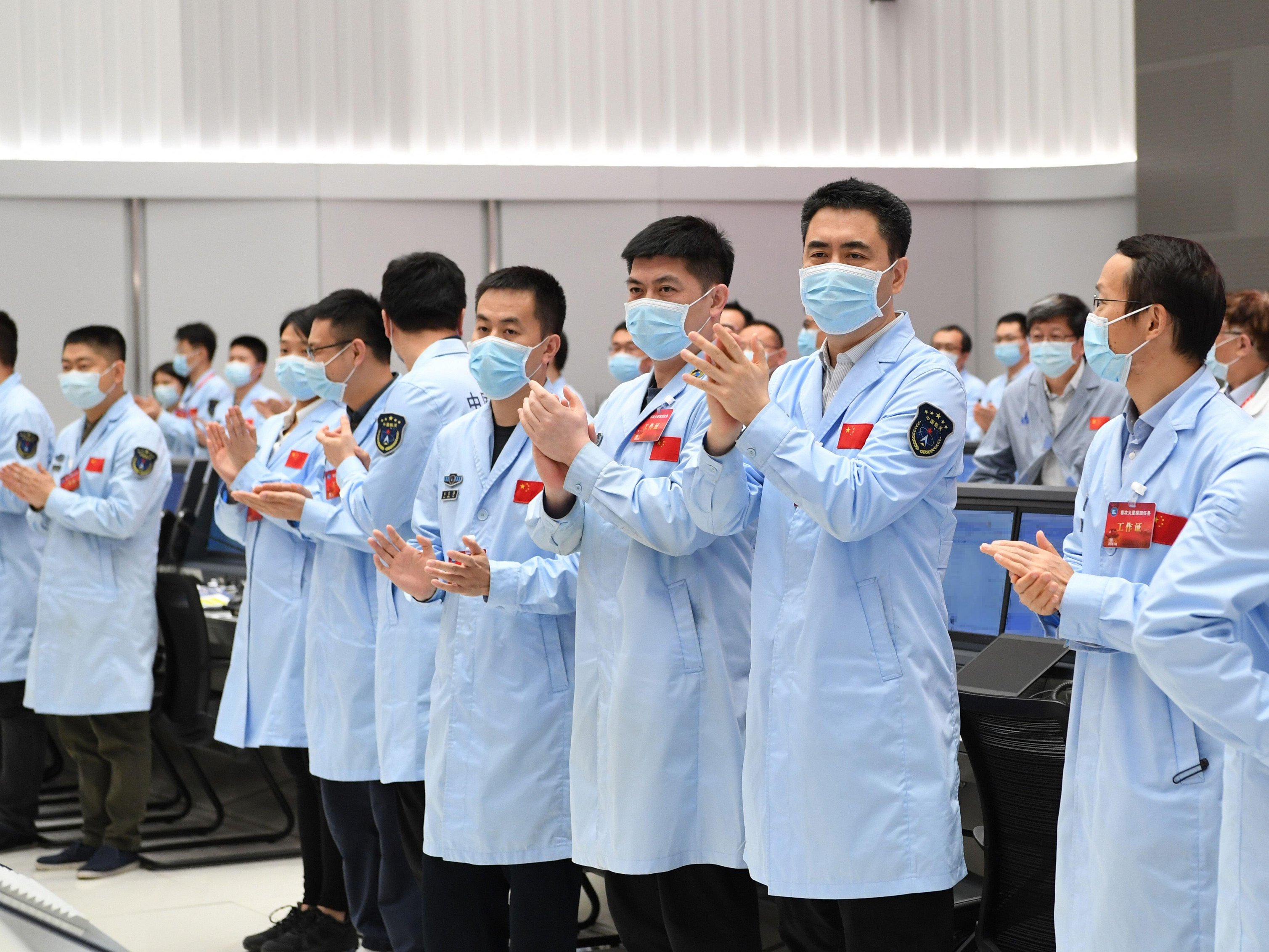 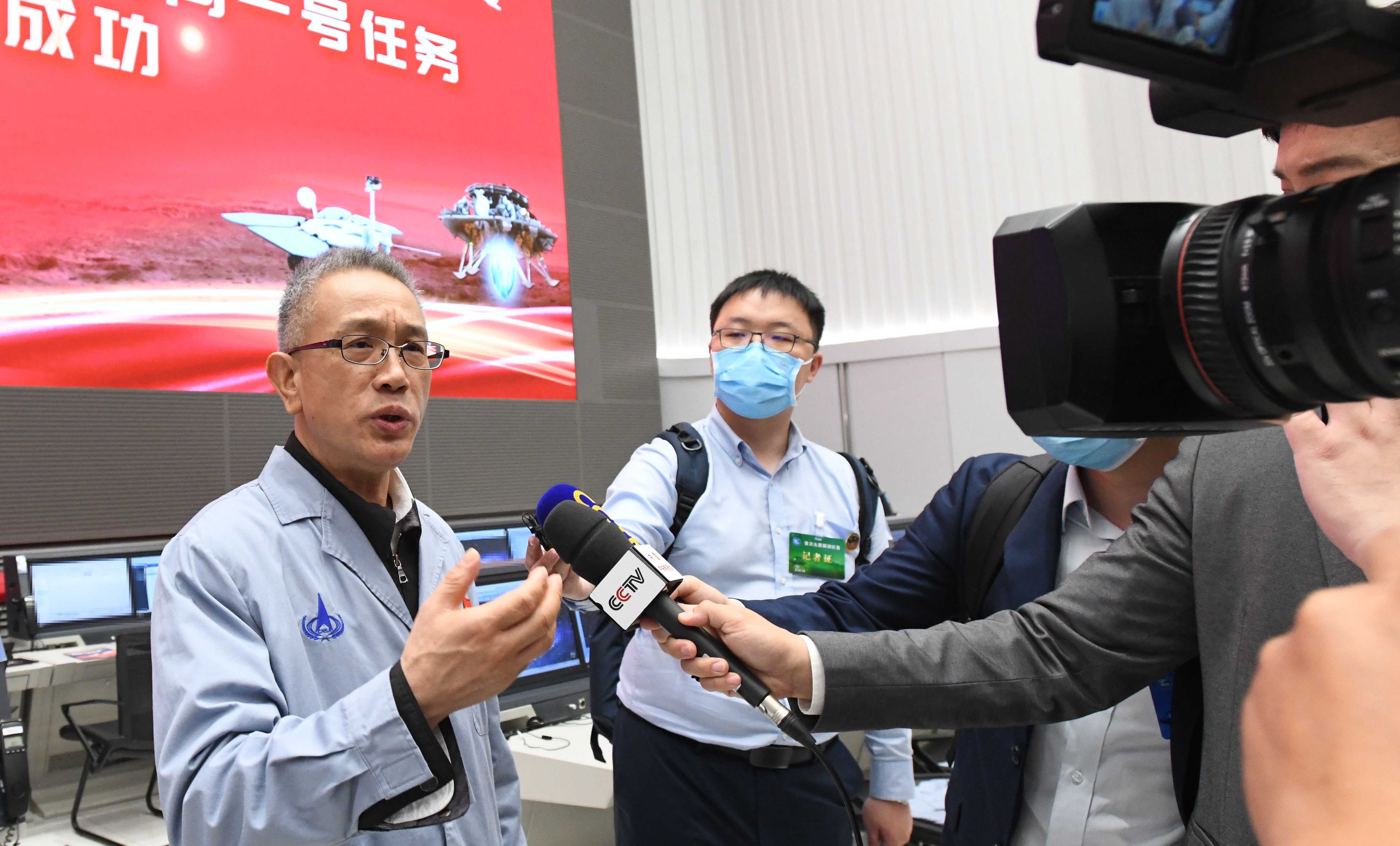 President Xi Jinping sent his “warm congratulations and sincere greetings to all members who have participated in the Mars exploration mission”, Xinhua reported.

The U.S. has had nine successful landings on Mars since 1976. The Soviet Union landed on the planet in 1971, but the mission failed after the craft stopped transmitting information soon after touchdown.

Several US, Russian and European attempts to land rovers on Mars have failed in the past, most recently in 2016 with the crash-landing of the Schiaparelli joint Russian-European spacecraft.

The latest successful arrival came in February, when US space agency NASA landed its rover Perseverance, which has since been exploring the planet.

And the UAE put a probe into the Red Planet’s orbit on February 9. 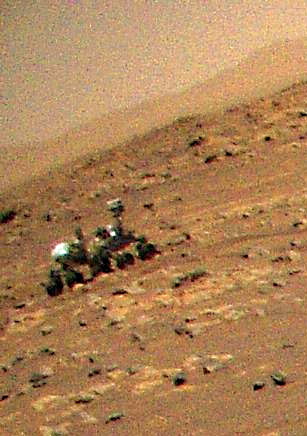 China’s rover will join Nasa’s Perseverance rover on the surface of MarsCredit: EPA

NASA expects the rover to collect its first sample in July for return to Earth in a decade.

The US rover launched a small robotic helicopter on Mars which was the first-ever powered flight on another planet.

China hasn’t revealed a detailed plan for its mission.

We do know it has six instruments that will help it explore the environment.

It has a special multispectral camera that can tell what minerals are present in rocks.

That’s located between two other cameras which will be taking pictures of the Martian surface.

It also has ground-penetrating radar tech that could help scientists work out how the Utopia Planitia basin formed and whether any ice is below the surface.

The Tianwen-1 spacecraft has a heat shield and a parachute which should ensure a safe landing.

China has come a long way in its race to catch up with the United States and Russia, whose astronauts and cosmonauts have decades of experience in space exploration.

It successfully launched the first module of its new space station last month with hopes of having it crewed by 2022 and eventually sending humans to the Moon.

In other space news, a Nasa spacecraft has begun a 1.4billion-mile journey back to Earth after collecting rock samples from an ancient asteroid.

And, China and Russia have pledged to build a shared Moon base, marking the start of a new era in space cooperation between the two countries.

What are your thoughts on the Mars space race? Let us know in the comments…