Snakes do a lot more than slither. Some swim, while others sidewind across sand (SN: 10/9/14). Some snakes even fly (SN: 6/29/20). But no one has ever seen a snake move the way that brown tree snakes do when they climb certain trees. By wrapping its tail around a tree or pole in a lasso-like grip and wriggling to propel itself, a brown tree snake can shimmy up structures that would otherwise be too wide to climb.

Better understanding how brown tree snakes (Boiga irregularis) get around could inform strategies to control their population in Guam, where the snakes are an invasive species. The reptiles are infamous for having wiped out almost all of the native forest birds on Guam and frequently cause power outages by clambering up utility poles.

The discovery of brown tree snakes’ lasso climbing method, reported online January 11 in Current Biology, was somewhat serendipitous. Julie Savidge, an ecologist at Colorado State University in Ft. Collins, and colleagues were investigating ways to keep these tree-climbing snakes away from Guam’s Micronesian starlings — one of only two native forest birds left on the island.

One of these ways involved tests to see whether a wide pipe, or baffle, around a pole could prevent predators from reaching a starling nest box at the top. In reviewing hours of footage of the baffle to monitor how well it deterred brown tree snakes, the team saw one snake do something wholly unexpected: The snake lassoed itself around the baffle and began scooting upward.

“We were in total shock,” says study coauthor Thomas Seibert, also an ecologist at Colorado State. “This isn’t something that a snake is supposed to do.”

Footage of a brown tree snake, caught with an infrared camera at night, reveals the unique way that this species climbs: The snake lassos itself around a pole and wriggles the loop of its tail to propel itself upward. The technique allows the reptile to shimmy up structures that would otherwise be too wide to climb.

Brown tree snakes and other snakes typically climb trees that are too smooth to slither up by coiling around a trunk multiple times. A snake wraps the front of its body around the trunk and then coils its back end around the tree in another loop to get a second grip. The snake then stretches its neck up and repeats the process to inch upward. But wrapping around a tree multiple times limits the width of a tree that a snake can scale. Using a single, large, lasso-like grip allows the brown tree snake to climb wider trees — or baffles, explains study coauthor Bruce Jayne, a biologist at the University of Cincinnati in Ohio.

In later lab experiments, the researchers observed several brown tree snakes using this lasso-like posture when placed inside an enclosure with a wide pole topped with a dead mouse for bait. But the lasso climbing method is not very efficient. Five brown tree snakes, ranging from about 1.1 to 1.7 meters long, climbed less than a millimeter per second, on average.

“This was extremely strenuous [for the snakes]. You could see them breathing heavily, and they’d take frequent breaks,” Seibert says. As a result, the snakes probably use the lasso-like motion only on the rare occasions that they encounter trees or poles too wide and smooth to be scaled any other way. 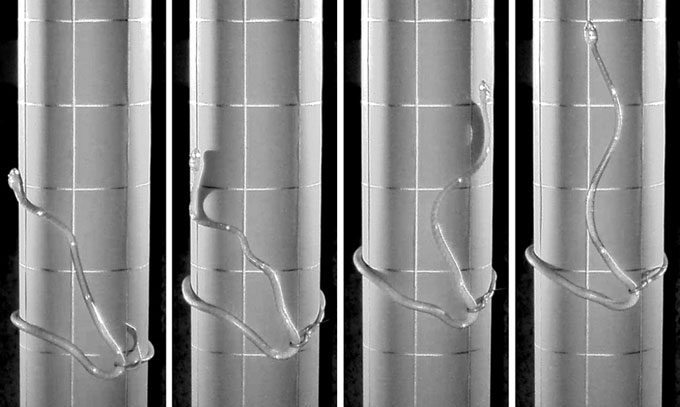 It’s “kind of whacky” to see a snake move like this, says Gregory Byrnes, a biologist at Siena College in Loudonville, N.Y., who was not involved in the work. But Byrnes is not entirely surprised that brown tree snakes have devised a way to deal with wide trees or baffles. These snakes are notoriously agile climbers that can bridge large gaps, slide up steep surfaces and traverse thin wires. “They have so much control over their bodies that if they’re given a challenge … they figure out a way to [overcome] it,” he says.

Testing the limits of brown tree snake agility could help design new baffles or other tools to protect endangered birds on Guam, Savidge says. Already, after the researchers placed several bird boxes on utility poles on the island that were too wide for brown tree snakes to lasso their way up, “the birds adopted these birdhouses and have done very, very well,” she says.

Better understanding snakes’ repertoire of climbing techniques could also make for better robots, says Henry Astley, a biologist at the University of Akron in Ohio who was not involved in the work.

Astley and others are interested in building snakelike robots to navigate terrains that are too difficult for robots with legs or wheels to traverse (SN: 11/16/12). He envisions snake bots slithering through earthquake rubble to search for survivors or wriggling inside large machinery to perform inspections. Discovering new, clever ways in which real snakes exploit their incredible flexibility could help engineers make better use of serpentine machines.

8 Simple Ways To Be Mindful At Work For Better Focus