Although best known as a plague that killed millions of Europeans from 1346 to 1353, the Black Death originated about a decade earlier in Central Asia, a new study suggests.

A strain of the plague-causing Yersinia pestis bacterium that killed people in what’s now Kyrgyzstan in 1338 and 1339 was a common ancestor of four Y. pestis strains previously linked to the deadly European outbreak, say archaeogeneticist Maria Spyrou of Eberhard Karls University of Tübingen in Germany and colleagues.

Spyrou’s group identified Y. pestis DNA in teeth of three individuals from an ancient Central Asian cemetery where tombstone inscriptions say that they, as well as many others buried there, died in 1338 and 1339 from an unspecified “pestilence.” Comparisons of that genetic material to modern and historic samples of Y. pestis DNA indicate that the Central Asian folks perished from an initial version of the plague bacterium that would wreak havoc on Europe, the Middle East and northern Africa until the early 1800s, the scientists report June 15 in Nature.

“The source location and time when this plague emerged was most likely in Central Asia in the first half of the 14th century,” Spyrou said in a June 14 news briefing.

Origins of the Black Death, or bubonic plague, have long been debated. What’s certain is that Y. pestis gets transmitted to humans by fleas that live on rodents. One current proposal holds that the plague bacterium originated in East Asia and was carried across the continent starting in the 1200s as the Mongol Empire expanded. That scenario leaned on genetic evidence from European Black Death victims and written accounts of an unidentified plague outbreak encountered by Mongol invaders of Baghdad in the 1200s.

But the first archaeological and genetic clues to the Black Death’s place and time of birth come from Central Asia, Spyrou says. Excavations at two cemeteries in northern Kyrgyzstan almost 140 years ago revealed tombstones indicating that many people buried there in 1338 and 1339 had died of an unknown epidemic. The cemeteries were used from the mid-1200s to the mid-1300s, but tombstone inscriptions indicated that deaths spiked in 1338 and 1339. Of 467 dated tombstones, 118 mark deaths in those two years. 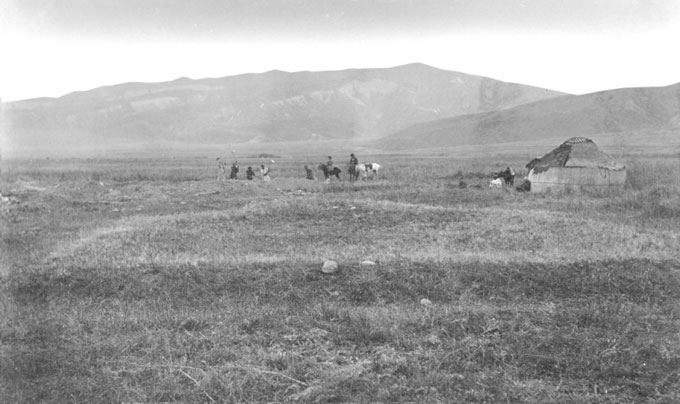 Excavators of a cemetery in Kyrgyzstan, shown here during work that ran from 1885 to 1892, unearthed human skeletons that have now provided genetic clues to the origins of Europe’s Black Death.A.S. Leybin, August 1886

Spyrou’s group was able to reconstruct the entire Y. pestis genome for two of three Central Asian individuals who died in 1338 or 1339 and whose teeth contained remnants of bacterial DNA. Comparisons with the genetic instructions of 203 modern Y. pestis samples and 47 Y. pestis samples dating from the 14th to 19th centuries pegged the Central Asian genomes as a single strain that was a direct ancestor of Black Death strains.

The researchers also found that marmots and other rodents now living in the same region of Central Asia carry forms of Y. pestis closely related to the ancient variant. The Y. pestis variant that killed Central Asians in 1338 and 1339 may thus have emerged locally, the investigators suggest.

Reasons for the rise of a particularly deadly form of Y. pestis in Central Asia during the early 1300s remain unclear. The earliest known Y. pestis strain, which dates to around 7,100 years ago in Eastern Europe, lacked a plague-inducing gene that enables rapid transmission from fleas to humans (SN: 6/29/21).

Spyrou’s group convincingly traces the origin of Y. pestis strains involved in Europe’s Black Death to Central Asia, says evolutionary biologist Nils Stenseth of the University of Oslo, who did not participate in the study. He regards the new findings as consistent with a scenario in which periods of warm weather in Central Asia triggered repeated plague outbreaks in Europe starting in the 1300s (SN: 2/23/15). Troops, travelers and merchants moving along trade routes from Asia kept bringing the plague into Europe, Stenseth suspects.

While the newly identified Y. pestis strain appears to be an ancestor of later European strains, clear-cut origins of the Black Death — and other pandemics, including COVID-19 — are notoriously hard to pin down, says evolutionary geneticist Hendrik Poinar of McMaster University in Hamilton, Canada.

For instance, it will be challenging to determine whether the ancient Y. pestis strain from Central Asia existed even earlier across a broad swath of the continent, he says. If so, then a precursor strain of the Black Death may have arisen prior to 1338 in an as-yet-undetermined part of Asia. Temptations to translate ancient DNA findings into a story of the Black Death’s precise place and time of origin “need to be tempered,” he says.

How to make tiny metal snowflakes

The metric system is gaining new prefixes. Here’s what to know

How Do You Spell the Short Version of ‘Usual’?

In 2022, the James Webb Space Telescope brought us new views of the cosmos