Late in the evening of February 28, 2021, a coal-dark space rock about the size of a soccer ball fell through the sky over northern England. The rock blazed in a dazzling, eight-second-long streak of light, split into fragments and sped toward the Earth. The largest piece went splat in the driveway of Rob and Cathryn Wilcock in the small, historic town of Winchcombe.

An analysis of those fragments now shows that the meteorite came from the outer solar system, and contains water that is chemically similar to Earth’s, scientists report November 16 in Science Advances. How Earth got its water remains one of science’s enduring mysteries. The new results support the idea that asteroids brought water to the young planet (SN: 5/6/15).

The Wilcocks were not the only ones who found pieces of the rock that fell that night. But they were the first. Bits of the Winchcombe meteorite were collected within 12 hours after they hit the ground, meaning they are relatively uncontaminated with earthly stuff, says planetary scientist Ashley King of London’s Natural History Museum. 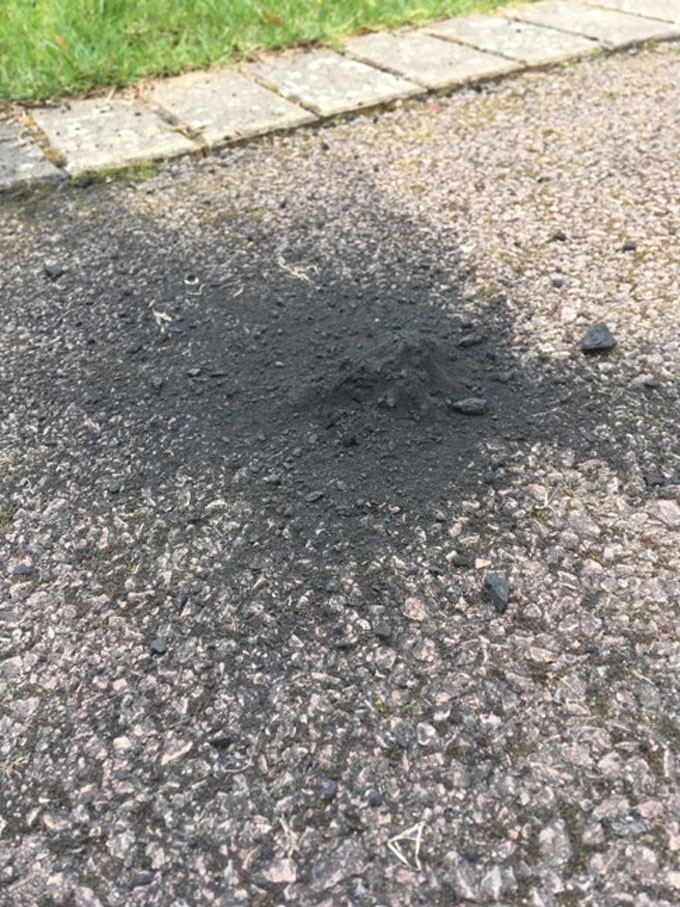 The first bits of the Winchcombe meteorite to be recovered were from Rob and Cathryn Wilcock’s driveway in England. The meteorite was so brittle it shattered on impact and made only a small dent in the driveway.R. Wilcock

Other meteorites have been recovered after being tracked from space to the ground, but never so quickly (SN: 12/20/12).

“It’s as pristine as we’re going to get from a meteorite,” King says. “Other than it landing in the museum on my desk, or other than sending a spacecraft up there, we can’t really get them any quicker or more pristine.”

After collecting about 530 grams of meteorite from Winchcombe and other sites, including a sheep field in Scotland, King and colleagues threw a kitchen sink of lab techniques at the samples. The researchers polished the material, heated it and bombarded it with electrons, X-rays and lasers to figure out what elements and minerals it contained.

The team also analyzed video of the fireball from the UK Fireball Alliance, a collaboration of 16 meteor-watching cameras around the world, plus many more videos from doorbell and dashboard cameras. The films helped to determine the meteorite’s trajectory and where it originated.

The meteorite is a type of rare, carbon-rich rock called a carbonaceous chondrite, the team found. It came from an asteroid near the orbit of Jupiter, and got its start toward Earth around 300,000 years ago, a relatively short time for a trip through space, the researchers calculate.

Chemical analyses also revealed that the meteorite is about 11 percent water by weight, with the water locked in hydrated minerals. Some of the hydrogen in that water is actually deuterium, a heavy form of hydrogen, and the ratio of hydrogen to deuterium in the meteorite is similar to that of the Earth’s atmosphere. “It’s a good indication that water [on Earth] was coming from water-rich asteroids,” King says.

Researchers also found amino acids and other organic material in the meteorite pieces. “These are the building blocks for things like DNA,” King says. The pieces “don’t contain life, but they have the starting point for life locked up in them.” Further studies can help determine how those molecules formed in the asteroid that the meteorite came from, and how similar organic material could have been delivered to the early Earth.

“It’s always exciting to have access to material that can provide a new window into an early time and place in our solar system,” says planetary scientist Meenakshi Wadhwa of Arizona State University in Tempe, who was not involved in the study.

She hopes future studies will compare the samples of the Winchcombe meteorite to samples of asteroids Ryugu and Bennu, which were collected by spacecraft and sent back to Earth (SN: 1/15/19). Those asteroids are both closer to Earth than the main asteroid belt, where the Winchcombe meteorite came from. Comparing and contrasting all three samples will build a more complete picture of the early solar system’s makeup, and how it evolved into what we see today.

Long considered loners, many marsupials may have complex social lives

These are our top space images of all time

Got a weird COVID-19 symptom? You’re not alone

‘Supergenes’ Bend the Rules of Evolution

How Much Would You Pay to Save Your Pet’s Life?