Mysterious deaths of bald eagles, mallards and other lake life in the southeastern United States have puzzled scientists for more than 20 years. After a long slog exploring the quirks of cyanobacteria gluing themselves to an invasive water weed, a research team has found a toxin that could be the culprit.

And it’s an odd one, the team reports March 26 in Science.

Nicknamed AETX, the toxin has an unusual chemical structure requiring building blocks rich in the element bromine, says Susan Wilde, an aquatic ecologist at the University of Georgia in Athens. Yet those bromide building blocks are not routinely abundant in southern lake water. That’s where the life story of a particular water weed comes in.

The mystery of the unknown toxin began at an Arkansas lake during the winter of 1994–95 with the nation’s largest unexplained die-off of bald eagles. The eagles, coots and some other birds lost their motor coordination, struggled to fly or even walk, and had seizures. Checking the ill animals’ brains revealed swathes of unnatural microscopic holes, or vacuoles. By 1998, six states had confirmed bird die-offs with the same disease, now called VM, short for vacuolar myelinopathy.

Wilde noticed that lakes with die-offs grew dense expanses of the green bottlebrush-shaped invasive water plant called Hydrilla verticillata. In 2001, she and several generations of students and international collaborators began a long journey of exploring whether the plants and their ride-along cyanobacteria might sometimes destroy brains.

“It’s not a safe topic for a dissertation,” she warned prospective grad students. There wasn’t much money or any certainty of success. But “it’s so cool,” she remembers them saying.

One clue came from looking at this Hydrilla under microscope lighting that can make certain substances fluoresce. That revealed splats of cyanobacteria gripping the undersides of leaves and protecting their colonies with goo. Some other cyanobacteria, which slosh around as soup in water, release great flushes of toxins that kill fish and threaten human swimmers, but leaf-clingers weren’t typically menaces.

Blue marks the spot. A dark-orange closeup micrograph of the leaf of a water weed (Hydrilla verticillata) shows lighter orange splotches of worrisome cyanobacteria colonies (Aetokthonos hydrillicola). The blue comes from an overlay where special imaging techniques reveal a suspicious substance — thought to be the toxin — that the cyanobacteria are releasing.S. Breinlinger et al/Science 2021

This cyanobacterium turned out to be a new species (Aetokthonos hydrillicola). It also turned out to be hard to grow in the lab. It took two years after collecting the stuff from a reservoir before the team raised enough cyanobacteria for their first trial feeding a watery solution of it to test animals.

This cyanobacteria soup didn’t seem to bother the test chickens at all, however. Microscopic analysis found no tiny holes in their brains.

The researchers then wondered if something weird was going on with the lab culture setup. They collected wild weeds glopped with cyanobacteria from lakes with confirmed VM outbreaks. Using an elaborate lab setup to detect what chemical compounds the bacteria were making, the team hunted for unusual suspects. And there, lurking in the splotches marking the bacterial colonies, was a previously unknown compound, with abundant bromide molecules. These colonies did yield substances that killed test animals. And providing bromide compounds to lab colonies made them turn toxin too.

Bromine can get into lakes from various sources, some natural and not, such as power plants. Researchers discovered that the invasive Hydrilla builds up extreme concentrations of bromine compounds, 20 times greater than the concentrations in the lake bottom mud and 500 to 1,000 times greater than in lake water. In late summer, the warm water stays at the top of the lake trapping chilly, dark, low-oxygen water below. The weedy Hydrilla stops flourishing and starts leaking bromine-rich compounds. That’s when the cyanobacteria have the ingredients to make their deadly toxin. 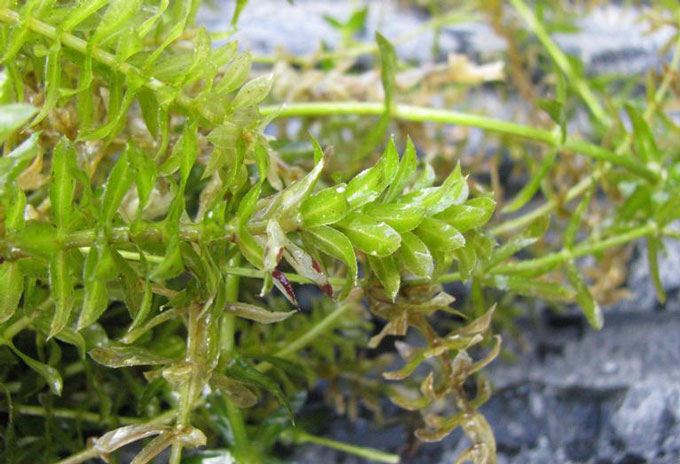 The newly discovered exotic chemistry of these toxin-makers doesn’t surprise Jason Stajich of University of California, Riverside, who studies other cyanobacteria in his genetic explorations of microbial evolution. Free-floating cyanobacteria cause toxic blooms in both marine and fresh water (SN: 8/28/18). But this green bacterial group also includes species that create the world we love. The desert crusts Stajich studies (like “bread crust” but on desert surfaces, he says) take years to form and depend on networks of cyanobacteria (SN: 12/10/19).

In this case, now that the suspect has been nabbed, there’s even more reason to get rid of the Hydrilla invaders that facilitate the toxin making. Water birds gorge on the Hydrilla and its ride-along bacteria and thus get a deadly dose of toxin. Predators such as eagles and owls that feast on those water birds also get poisoned. In the lab, the toxin affects other vertebrates, such as amphibians and snakes. Knowing the makeup of the toxin will now let the lab check for effects on mammals. With such a wide range of potentially susceptible creatures, solving the mystery couldn’t have come soon enough.