The upbeat song Sweet Caroline often prompts listeners to sing and dance. But when music therapist Alaine Reschke-Hernández played the song for an older person, the song evoked a sad memory and tears. That patient’s surprising reaction highlights how music, and the memories that come with it, can influence emotions, even years later.

Strategically using music can improve well-being, particularly for older people, says Reschke-Hernández, of the University of Kentucky in Lexington. “Music is so connected and integrated with so many different elements of our life,” she says. From joyful celebrations to solemn ceremonies, music is part of meaningful events throughout life and becomes strongly associated with memory.

In her own practice, Reschke-Hernández has seen the benefits of music therapy. But she wanted to see how far those benefits might go. She partnered with neuroscientists to find out if tapping into music-associated memories could positively influence the emotions of people with dementia. 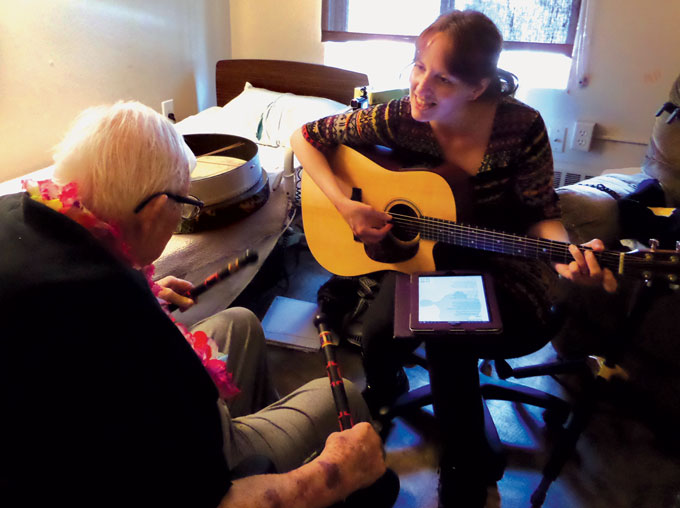 Music therapist Alaine Reschke-Hernández plays guitar for a patient. She is partnering with neuroscientists to better understand how music, memory and emotions are linked in people with dementia.Andrea Mahoney

Because memories are so personal, music that evokes happiness in some may not do so in others. For this reason, the researchers asked participants — including 19 healthy older adults and 20 people with Alzheimer’s disease — to choose songs that evoked either sadness or happiness.

The findings suggest that emotional responses to music may not depend on memory recall, Reschke-Hernández says. “If we can help [people with dementia] have a lasting emotional response, or better emotional regulation using music, well, that’s fantastic,” she says.

Such information could be important for doctors and caregivers. Music could have long-lasting effects on a patient’s emotions and well-being — in some cases negatively. Applying music therapy without this consideration might cause more harm than good, says Melita Belgrave, a music therapy professor at Arizona State University in Tempe. “If you’re using music, you can do harm if you’re not paying attention.”

This type of research may also help scientists better understand memory loss in dementia. Some evidence suggests that brain regions involved in recognizing music remain relatively untouched by Alzheimer’s disease, and that music may boost autobiographical memories in people with the disease (SN: 6/15/15). The study “raises this question about other types of memory that seem to be relatively intact in people with dementia,” such as unconscious memory, says coauthor Edmarie Gúzman-Vélez, a neuroscientist at Massachusetts General Hospital and Harvard Medical School in Boston. “What can we do to tap into those?”

Reschke-Hernández wants to continue building partnerships with neuroscientists and other researchers to understand exactly how music activates memories and the emotions associated with them. Eventually, she hopes to replicate the study with more diverse participants. “It’s not just looking at a diverse population of participants in terms of their culture or ethnicity, but also their age,” Reschke-Hernández emphasizes.

For some dementia patients, music may be the perfect tool to explore, access and benefit from positive emotions activated by hidden memories. That could make these people’s lives better, she says, even if they don’t remember.