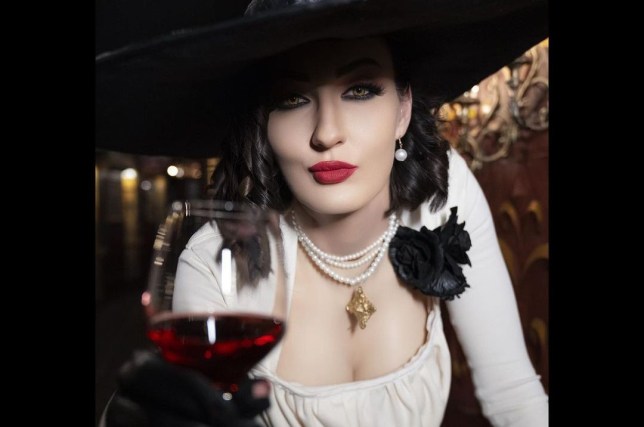 Lady Dimitrescu cosplay isn’t going to get much more accurate than this (pic: Ekaterina Lisina)

Lady Dimitrescu, the 9’ 6” tall vampire lady from Resident Evil Village, has already become an internet favourite long before the game is out or anyone really knows what her character is about.

That also means she’s become a popular topic for cosplay, even if there is an obvious problem given her scale. Although that’s less of an issue for Russian model Ekaterina Lisina than for others.

Lisina is 6 feet 9 inches (2.06m) tall and previous to becoming a full-time model she was a basketball player for the Russian national team, so yeah… she’s really tall.

To be fair though, she has put much more effort into the cosplay than just wearing a hat and calling it a day. Her make-up and props, such as the suspicious looking glass of red ‘wine’, are straight out of the game trailers and the Maiden demo.

‘After keeping this a secret for so long, I am incredibly excited to reveal this special cosplay of Lady Dimitrescu, said Lisina on Instagram.

‘Countless amounts of hours, stress, and labour went into this ambitious project, and I hope you all will enjoy this just as much as I have. And, of course, thanks to my team for making this possible.’

Despite being an instant internet sensation, it still isn’t clear what Lady Dimitrescu actually is. The implication is she’s a vampire, but she doesn’t seem to have elongated teeth or an aversity to sunlight.

Apart from her height, the only abnormal power she’s been shown to possess is the ability to extend her nails into claw-like weapons, which seems more like the sort of thing a normal tyrant creature would do in Resident Evil.

Exactly what’s going on with her and her ‘daughters’ is a mystery at the moment, although it wouldn’t be surprising if Capcom were hastily rewriting her backstory, given her unexpected popularity.

Resident Evil Village will be released on Xbox One, PlayStation 4, Xbox Series X/S, PlayStation 5, PC, and Stadia on May 7.

How to watch the Shrek movies in order