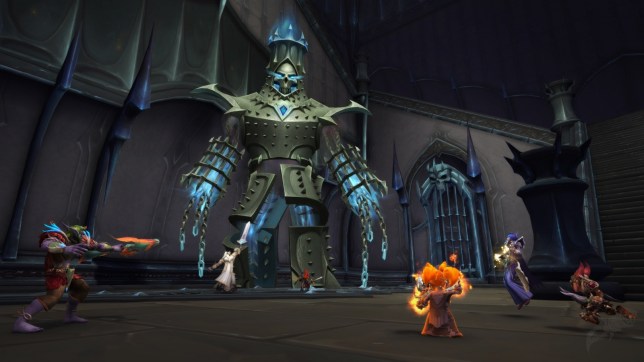 The online BlizzCon event begins today but some of the planned announcements appear to have already leaked beforehand.

Fans already know a few things to expect from BlizzCon (or BlizzConline as it’s being called this year) over the next few days. Overwatch 2, for example, will be featured in some capacity, after over a year of silence, but at least three other secret announcements have been given away.

Firstly, World Of Warcraft: Shadowlands will be getting its first major content patch, titled Chains Of Domination. Apparently, Blizzard accidentally released its press kits for the event early and a bunch of information has already been shared via Wowhead.

Chains Of Domination will see you delve into the depths of the Jailer’s domain; the Jailer being the main antagonist of Shadowlands. But you won’t be doing it alone, as the four Covenants will be backing you too.

It will come with the usual gamut of new quests, cosmetics, and the like, plus a new 10-boss raid called the Sanctum of Dominations and what’s been described as a mega-dungeon called Tazavesh, the Veiled Market, which will culminate with a heist to steal powerful artefacts.

This isn’t the only Warcraft related leak either. World Of Warcraft Classic will be getting its own expansion too, specifically the very first expansion the game ever received: The Burning Crusade.

The last leak doesn’t come from Blizzard, but rather the Pan European Game Information (PEGI) ratings board. Initially spotted by Gematsu, something called the Blizzard Arcade Collection was rated for PC and consists of Lost Vikings, Rock & Roll Racing, and Blackthorne.

These three games originally released for the SNES back in the 90s. Lost Vikings and Rock & Roll Racing were made when Blizzard used to be called Silicon & Synapse and although a world away from Warcraft and their later games were well regarded console games back in the day.

According to the listing, the collection is supposed to release later today so, if this is accurate, expect it to drop after the official announcement during the event.

The Voice UK: Olly Murs teases he’ll do ‘something crazy’ if he wins

Will the Pandemic Be Over by the Summer?