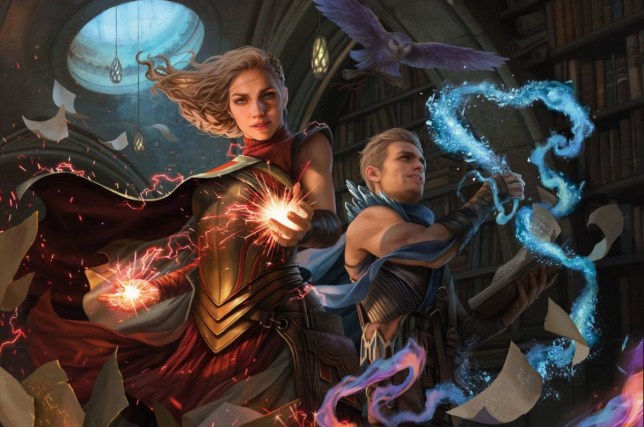 Magic: The Gathering is bigger than ever (pic: Wizards of the Coast)

GameCentral examines the ever increasing success of card game Magic: The Gathering and looks at new expansion Strixhaven: School Of Mages.

Magic: The Gathering is played by an estimated 20 million people around the world. It’s been published in 11 languages, with more than 20,000 different cards having been released since it was first launched almost 30 years ago. It’s a strategy card game where you play as a powerful spellcaster, summoning ferocious creatures to battle your opponent with and it’s only getting more popular.

In 1993, Richard Garfield and Wizards of the Coast released the first set of cards and now, after more than 80 expansions, Magic: The Gathering has become the inspiration for many other collectible card games, including Blizzard’s digital offering Hearthstone.

Magic: The Gathering is all about booster packs which contain randomised cards. Particularly powerful cards are rarer than others, making collecting and trading them as much a part of the game as actually playing matches. Players assemble their own decks and the sheer number of cards involved in Magic: The Gathering allows players to develop their own tactical strategies.

Easy to pick up but hard to master, Magic: The Gathering is built on a basic fantasy storytelling foundation. You and your opponent are Planeswalkers, mages who travel between different planes of existence and battle each other by summoning powerful spells and creatures. The goal is to lower your opponent’s life total while sustaining your own hit points. The first player whose life falls from 20 to 0 loses.

As a player your most important cards are called land cards, which provide the mana which allows you to cast spells and summon creatures. These land cards have an assigned colour and these colours are the building blocks of Magic: The Gathering.

Much like the elements in Pokémon, each colour represents a landscape and what kind of the magic the card will do. Green cards are aligned to forests and nature energy, blue cards deal with mermaids and spirits, red cards support fire magic, black mana cards work with zombies and demons, and its opposite, white mana, supports healing, clerics, and knights.

Magic: The Gathering is a constantly evolving game, as new cards are always being introduced, but be warned some cards can contain enough stats and jargon to make you feel like you need a PhD from Hogwarts to play them.

As you’d expect with such a huge player base, there is also an impressive community that will make you feel welcome at pre-organised weekly events at your local game shop, where you will no doubt be tempted to pick up a couple of booster packs and make important trades, which will give you new deck building ideas.

Even if you don’t have the time to engage in professional level play, Magic: The Gathering cards are stunning and there are communities built purely around collecting and appreciating the art on the cards. There’s a huge trade in custom and signed cards and now, with new technology, comes new ways to engage with the franchise, thanks to the recently released augmented reality badges that can put your own face on a Magic: The Gathering card. 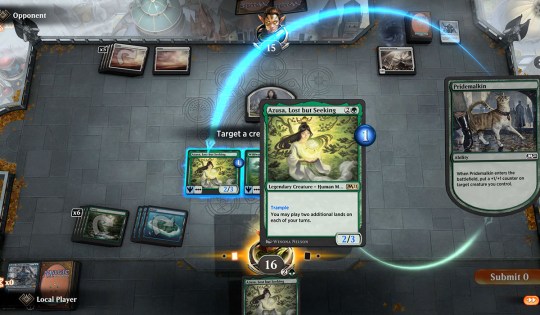 You can play online whether there’s a pandemic on or not (pic: Wizards of the Coast)

Local games shops are starting to reopen over the next couple of months, but the pandemic didn’t faze the Magic: The Gathering community, who were still able to show off their physical cards and play together using SpellTable, which allows players to use webcams or their phones to play.

Wizards of the Coast may have nixed in-store gaming for the time being but they have made every effort to support the communities through the pandemic, by making sure their long-standing core event Friday Night Magic continues online in the form of Pandemic Magic: Friday Night Magic At Home. This allows participating stores to set up local Discord servers to keep players in touch and arrange dedicated events.

Another tool to keep housebound wizards happy is Magic: The Gathering Arena, the digital version of the card game that, as of a couple of months ago now, is also available as an app on your phone. Don’t worry, it’s also cross-platform, so the virtual card deck you’ve built is easily accessible. Although whether it’ll become more popular than Hearthstone remains to be seen.

The Easter holidays may be over but it’s back to school with the newest Magic: The Gathering release Strixhaven: School of Mages, which enrols players into one of five colleges, each named after the Elder Dragon that school represents. These colleges are where some of the collectible card game’s most powerful arcane practitioners are supposedly trained.

For daring adventurers, Lorehold will be a likely home, while players who use magic as artistic expression will gravitate toward Prismari. Math geniuses will find like-minded students within Quandrix, while wordsmiths are destined for Silverquill. For students who are inclined to enhance or exploit nature with their magic, the final college of Witherbloom is where they’re bound to lay their roots. With new cards like ‘Eager first year’ it’s a good point for new players to jump into the game. 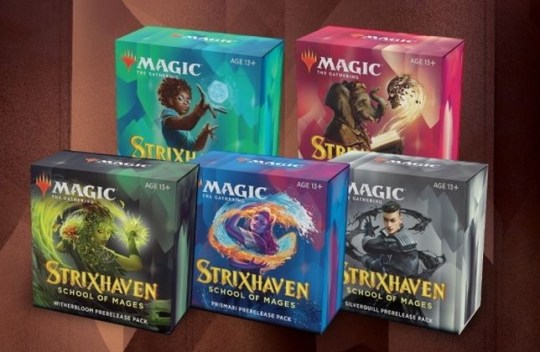 No one ever buys just one booster pack (pic: Wizards of the Coast)

Dave Salisbury, from Manchester’s Fan Boy 3 gaming shop, which is planning on reopening for face-to-face gaming on May 17, told us, ‘We’re gutted that we are missing doing ‘live’ events for Strixhaven. What a great theme to have fun with – usually we dress up and dress the store and do some commemorative giveaway – we made sporks for War of the Spork, gingerbread lady tokens for Eldraine, and challenge coins (to pay the ferryman) for Theros: Beyond Death.

‘With Magic it’s the physical buzz of the event that drives it. Its electric. We were the first store that broke 300 players for a single Magic event, and there is nothing like the feel of it.’

For a look at these new cards online, Strixhaven: School Of Mages releases for Magic Arena and Magic: The Gathering Online on April 15, with the physical set following a week later on April 23. It can act as a self-contained game, but it’s not been without controversy as there were suggestions some of the card art was plagiarised, an act that could see you on the end of a ‘Sudden Death’ spell in this community.

Magic: The Gathering is definitely a community game and often shops that concentrate on Magic make it their main selling point, such as Coliseum Cards in Tamworth and Mana Gaming in Eastbourne. These shops are now anticipating a flux of new Magic: The Gathering players attracted by the boom of collectable trading cards games seen during lockdown.

Wizards of the Coast are also doing everything they can to make this year a user-friendly entry point, by reprinting Jump Start a low-price bundle, which is the most accessible way to get into playing. Just grab two boosters, mash the contents together, and play against somebody else’s two boosters. But be warned Magic: The Gathering is often fondly referred to as ‘cardboard crack’ as you’ll always just need to buy just one more booster pack!