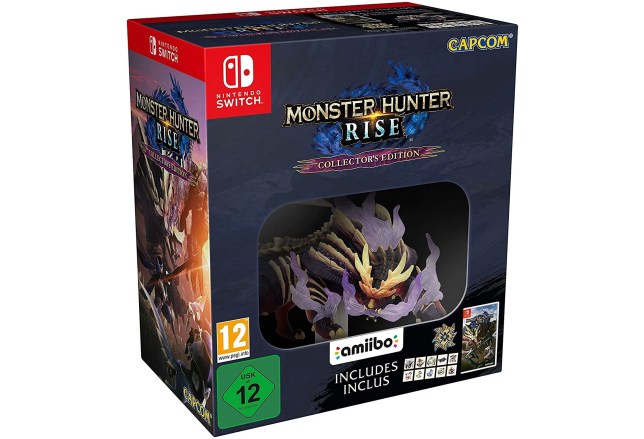 Readers reveal the last time they bought a physical copy of a game, as opposed to digital, and for some that means going back quite a while.

The subject for this week’s Hot Topic was suggested by reader Grant and asked whether the last boxed copy of a game you bought was brand new or second-hand? Why did you buy it physically instead of a digital version and is that your usual reasoning?

Most readers admitted that because of the convenience, and increasingly the price, they buy the majority of their games digitally now, although interestingly many didn’t realise quite how much until replying to this Hot Topic.

Shop around
The last physical game I’ve bought was Monster Hunter Rise a few weeks ago, I bought it physical because it was on for the bargain price of £34.99.

The game I bought before this was It Takes Two, which cost me £17.99 for a digital version instead of £32 for the physical. I always shop around for the best price, but if I find a game is the same price digital and physical I’ll tend to buy the digital version for convenience.
wasimr34

Vinyl games
I still buy physical games most of the time, only downloading a few indies. I don’t have broadband at the moment, so that is a factor in my choice, but I’ll admit I still prefer physical over digital.

If you don’t like a game you can sell it or trade it for something else and I just enjoy collecting games. I will buy a collector’s edition of a game I really like the look of or if I’m a fan of the series.

I know there’s a big push towards digital, but I can’t see physical ever disappearing completely. Companies such as Limited Run Games seem to be appealing to collectors and in an age of Spotify, etc. think how vinyl has made a comeback to be highly collectible.

I think there’s a lot of humans out there that still just like to collect physical stuff – myself included!
LastYearsModel

Resistance member
I’ve bought four games recently, three of which were physical. The sole digital purchase was using free credit from Microsoft, so it didn’t cost me a penny. The most recent was last summer’s PGA 2K21 the other day, on disc, new.

I only had a Switch last gen and the eShop was my first foray into digital game purchases. My personal rule of thumb is that I’ll shell out small amounts for digital only, especially if that’s the only way to get a cracking indie title, but if I’m spending much more than £20 I want physical. Part of that is that a lot of digital prices still seem excessive/cheeky considering the absence of manufacturing and shipping costs, plus it seems there’s more chance of getting a physical game cheaper in a sale than a digital copy.

Traditionally, my opinion was that physical media means I’ll always have my copy of the thing. But, that isn’t necessarily true now is it?

I bought an Xbox Series X last year for the disc drive and the backlog/backwards compatibility factor, and it was quite an eye opener to see that, even when I own the disc, I’m still slave to various servers and only really own a fraction of the game. With PGA 2K21, I had to install over 6GB of something before I could start the game! Then there are huge updates and patches to download even if I want to play one of my previous gen discs in the Xbox Series X. Of course, I had already seen some of this with the Switch, and PC gamers probably wonder what all the fuss is about, having been digital for years.

I’m still a member of The Resistance – on principle if nothing else – but it seems there’s no stopping the tide coming in. Thankfully there’s no need to download updates and patches for my other love, films, even though disc media is on the wane for that too.

The big worry though – for games and film – is availability and preservation. Whether that’s Sony shutting down the older PlayStation stores or services like Netflix only offering a tiny number of films older than me.
FoximusPrime81 (gamertag/NN ID/Twitter)

I’m a gamer
I don’t download games, I only buy disk. Easy to lend out and don’t have to give out my login details. And if I really hate the game I can sell it on, so I’ll do the opposite. The last game I bought on download was Jurassic Park Evolution, it came out as a download a month before the disc and I couldn’t wait. I got the game and spent many happy days on that, I even bought the DLC.

It was so good making a T-Rex and putting it to sleep to move it to the enclosure you had made for, it putting in bushes and trees to make it comfortable so it didn’t break out. I love them sort of games where you’re not shouting at the TV or at someone you have never met; you’re sat there in you’re own little bubble enjoying your game, playing a game that makes you go, ‘I’m a gamer and I love it!’
David

Limited choice
The last physical copy I bought was a pre-order of No More Heroes 1 and 2 for Switch from Limited Run Games. I bought it physically. As you can guess from the name of the company it is a limited run of certain games and if you don’t order it in a space of a month then you cannot get the game unless you go on somewhere like eBay where the prices won’t be as cheap as Limited Run Games’ website.

I played both games on the Wii originally and wanted to have a copy on the Switch, as I also intend to buy No More Heroes 3 this year if it reviews well too. Recently in the past year or two I have been buying some of the Nintendo games again, so I have them all on Switch. Games like Super Mario 3D All-Stars, Mario Kart 8 Deluxe, and Super Mario 3D World.

I like buying indie games as they are not too long and they are quite original game ideas, so I have got used to buying indies for £10 to £20 digitally. I always want to have a physical collection as well as a digital collection, so even if it does all go digital in future I can still play older generations games on my old consoles.

I tend to buy physical over digital when there is a choice, as being able to trade in the game if you don’t like it, or you don’t want to keep it after completing it, is good.
Andrew J.

Keeping it physical
I mostly buy physical copies of games, as I still buy CDs and blu-rays. I like to have something to show for what I’ve paid for and I can still sell it on if I wish to.

Buy and sell
Having picked up an Xbox Series S at launch last year, I struggle to remember the last physical copy of a game that I bought. I suppose the last physical game copy I had is Ghost Of Tsushima, which I borrowed from a mate at Christmas time – but I was going to get a copy anyway before he offered, so let’s go with that.

I often mainly bought pre-owned physical games wherever I could. Even the new releases, after a week or so, would be popping up in GAME or CeX if you kept your eyes peeled. One thing I will miss from the lack of physical buying is the top-price games that I would previously buy, play and trade-in, in quick succession. Call Of Duty is a prime example; I love those games, the campaigns, etc. but they are short (as I don’t really go much for online gaming) and I would always normally buy, have a dabble, and trade them in to get a decent slice of money back. Can’t do that on my Xbox now! Also, given the fact that prices for games like Call Of Duty start and remain high digitally, there’s less of an incentive for me to buy those games now.

Another thing the pre-owned market was good for was picking up some cheap thrills when I had a weekend to myself, or a game that I wouldn’t pay full-price for, but nevertheless wanted to try. Having Game Pass effectively fills that role for me, so I’m not too bothered at this point, being restricted to digital-only gaming from that perspective.

I’ve never been one to go for the collector’s editions. I always thought they were simply ways for companies to squeeze a few more £s out of gamers by adding in some cheap extras and putting it in a different box. I have seen folks who’re very proud of their bookcase array of games collected, and it does look cool, but for me the content of the game itself was always the main thing – and the cheapest way of acquiring it! I think collector’s editions, above all other physical game media, will endure the longest, even if it becomes a SteelBook with a download code inside it!
NL