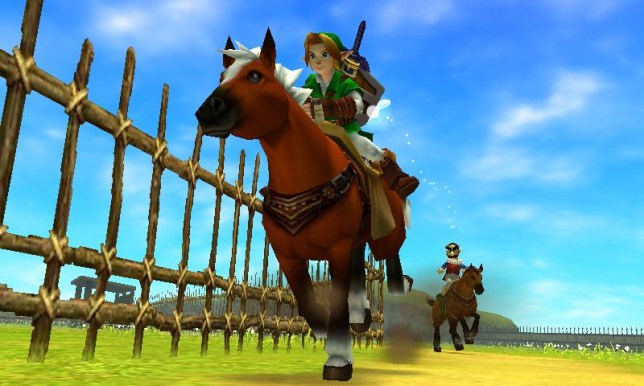 The Legend Of Zelda: Ocarina Of Time 3D – time for a remake? (pic: Nintendo)

Readers celebrate the 35th anniversary of The Legend Of Zelda, by naming their favourite entries and their hopes for the future.

The subject for this week’s Hot Topic is something Nintendo didn’t mention themselves during the recent Nintendo Direct but which readers certainly had something to say about, as we asked to hear your memories of the series and its games.

Most people hadn’t started with the original NES game but instead reminisced about A Link To the Past, Ocarina Of Time, and the other classics of Nintendo’s iconic franchise.

The magic of Zelda
There is no question in my mind that Zelda is the greatest video game franchise of all time. What series has had more influence or can boast so many games that have been named the best ever made? (Okay, Mario comes close.)

The first one I ever played was Ocarina Of Time on the N64 and I’d literally never seen anything like it. It had me hooked for weeks and to this day I consider it to be essentially perfect. How they managed to do all that on such basic hardware I’ll never know but until Breath Of the Wild I’d say it was still unbeaten.

The magic of Zelda is how it get so many really difficult things right and manages to make them seem effortless. The huge overworld, the intricately designed dungeons, the 3D combat, the boss battles, the exploration, it’s all done so well and fits together perfectly.

What Breath Of The Wild 2 will do I don’t know but I’d be very surprised if it wasn’t one of the best games ever, I mean… they usually are.
Wrangler

Exploring Hyrule
I’ll shock you all by saying that until Breath Of The Wild I hadn’t played any Zelda game so I really didn’t have any preconceptions, and didn’t get all the stuff about no proper dungeons. What I did get though was an amazing open world adventure the likes of which I’ve never seen before.

Open world is just a style of level, if can be anything, but of course we all associate it with the Ubisoft formula and all the PlayStation exclusives, but Zelda is different. It’s huge and there’s very little signposting, so it feels like you’re exploring something that’s never been seen before. You can barely feel the hand of the designers at all, and given how carefully designed it actually is that’s amazing.

A work of art as far as I’m concerned and while I have tried to play the earlier games for me they don’t compare, so I’m hoping the sequel will live up to the legacy.
Thomas

The forgotten Zelda
I just want to be the oddball that says I really like Zelda 2: The Adventure Of Link. For those that don’t know (it is on the NES Virtual Console if you have Nintendo Switch Online) it’s very different to the first game and uses a side-on view for all the combat. It’s a proper role-player too, with stats, so completely unlike the others. It’s a bit like Super Mario Bros. 2, except at least that had the excuse of being a different game renamed for Mario.

I always felt that if you were going to do a spin-off that something in the same style could work out really well. I could imagine someone like FromGames doing a real good job on it. Maybe it could even be a remake like Link’s Awakening. It must be the least played Zelda ever so it seems ripe for going back to.
SugarSniper

Name that tune
It was 1990 something and I was a youngish teen. I had a SNES and Zelda: A Link To The Past, where/when did I get Zelda? Was it with the SNES? Did I get it for Christmas? I don’t know… I’m old! What I do know is that from the very first instance, with that rousing orchestral score, bom, bom, bom bom bom bom BOMMMMMM I was pretty much sold on the Zelda franchise. An epic start to a 30 odd year love/hate affair (I hate Skyward Sword, it should be burned at the stake, hung, drawn and quartered, then burned again – did you see that trailer? They had lips… lips!) with the series.

As mentioned, Skyward Sword is coming nowhere near my Switch and Spirit Tracks and the Minish Cap can ‘get out of my pub’, but for the most part games like A Link To The Past, Ocarina Of Time, and Breath Of The Wild have left nothing but a swelling pride and love in my heart for this enduring, epic series of games – nay, experiences. Long may it continue.

For the future, well the near future at least, I would like to see Breath Of The Wild’s sequel incorporate some REAL actual Zelda dungeons. But how would it keep from being un-linear I hear you cry? Well, as I’ve mentioned before, you simply have a character lend out the items you need when you enter a dungeon and give them back when you’re finished. Magic, I should really apply to Nintendo.
big boy bent
PS: Oh and fixable weapons would be a bonus!

They get you in the end
The first Zelda game I played was Ocarina Of Time. It was a complete revelation to me and easily the greatest game I had ever played. I absolutely loved it and collected all of the heart pieces, although I think one gold skulltula eluded me.

Since then I have played nearly all of the Zelda games. My favourite title was always Ocarina, which I think was helped by it being my first Zelda. Although oddly when I played it and Majora’s Mask again on the 3DS I much preferred Majora’s Mask to Ocarina. This is even stranger as I did not like Majora’s Mask on the N64 and never finished it back then.

Majora’s Mask is not the only Zelda I stopped playing and I also gave up on Minish Cap, only to return to it many years later and love it. I also parked Breath Of The Wild for about 18 months before it finally clicked. I am hoping this pattern continues with Skyward Sword as that is another Zelda I failed to finish on my first attempt.

As for the 35th anniversary I am actually expecting Nintendo to release two Zelda collections:

In terms of Breath Of The Wild 2 I would like to see stronger characters. If Zelda does travel with Link then it would be nice if they would have natural conversations during the gameplay, akin to Joel and Ellie from The Last Of Us. Of course, that will not happen though as Link is mute and therefore Zelda will just end up being yet another female character nagging him.

I would also like to see more involved side stories. But again, this probably will not work if Link does not speak. At least Zelda could do the speaking to progress the story, I guess.
PazJohnMitch

Museum pieces
I’ve just seen The Micro Museum in Ramsgate, who did the Sir Clive Sinclair 80th birthday anniversary, has made a brief history of Zelda video.

Belated sequel
My very first experience of the legendary Zelda series was being at a friend’s house, when another friend came over and brought a golden boxed SNES game! He then put the game into the console and switched the power on and proceeded to play this rather intriguing title.

The spinning Triforce doing their little dance until forming to become one. Then the famous Hyrulian Zelda theme and logo which appeared, surrounding the Triforce symbol, and that was just the epic introduction. Then the game began!

Take in mind that I had never seen a top-down angled view of a game before and all this was very new to my young eyes. The start was very mysterious, as a tale is explained of past events, filling out the very epic tragedy that has hit the kingdom. You then wake after a dream or premonition about a certain Princess Zelda, explaining she is being held prisoner! You find that your uncle is just about to go out into the stormy night with a foreboding tune playing in the background. ‘Link, I’m going out for a while. I’ll be back by morning. Don’t leave the house.’

And that was that. I was intrigued and amazed at how well this game gripped me so quickly ,with wanting to find out what happens next. And that was before the first twist! Complete the light world and the dark world was then revealed, the main part of the game really! A bit like leaving Midgar in Final Fantasy 7 after over six or more (or a lot more) hours, to then find you have only just begun your journey!

To be honest though, the most disappointing thing was no SNES sequels to A Link To The Past! Having to wait Until the Ocarina Of Time, which is an awesome game, but still gutted about no SNES sequel which I had dreamt about for ages! Luckily, we had Link’s Awakening for the Game Boy but as good as it was, another SNES game would have fulfilled my immediate dreams perfectly.

So Alundra for the PlayStation 1 was my unofficial Zelda 3 sequel, and the characters even looked like Hylians! But what an amazing series of games with Twilight Princess and Majora’s Mask being my next favourites, respectively. So a happy 35th anniversary Legend Of Zelda, and long may you continue to bring magic, adventure and great soaring tunes, to keep us going in these uncertain times.
Alucard

GC: A Link Between Worlds on 3DS is a direct sequel to A Link To The Past on the SNES.

The small print
New Inbox updates appear every weekday mornin, with special Hot Topic Inboxes at the weekend. Readers’ letters are used on merit and may be edited for length and content.