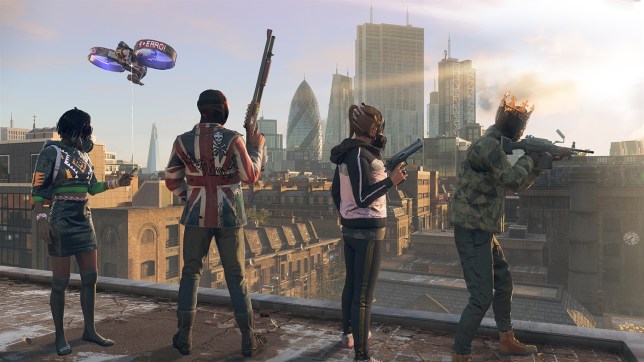 Watch Dogs always felt like a franchise that was lucky to get one sequel, let alone two, but Watch Dogs 2 actually turned out surprisingly well and is easily the best in the franchise – unlike last year’s Watch Dogs: Legion.

Originally the game was supposed to ship with multiplayer options but thanks to the coronavirus that was dropped until later or, to be more precise, today.

There are three modes in total: a free roam option where up to four can explore the whole game map in co-op, specific co-op missions for two to four players, and a PvP mode involving spiderbots.

GTA Online has been the obvious inspiration but whatever you think of the single-player campaign being able to bomb around virtual London with three friends does sound fun.

The PvP mode, Spiderbot Arena, is intended to be the first of several deathmatch options, which will presumably also include fighting as a normal person at some point.

Legion isn’t a terrible game – the combat mechanics in particular are fine – but instead a disappointing one, whose toothless script was made to seem worse in light of how there are no proper player characters, just randomised ones you recruit when exploring.

That’s not an issue in multiplayer though and indeed the co-op missions promise to make recruiting the best team an essential root to success.

The mode is available now for Xbox and PlayStation consoles, as well Stadia, but won’t be available on PC until later in the year.

What’s available today for everyone though are two new single-player missions, one about tracking down an algorithm that allows AIs to override human decisions when using drones, and another involving a tabloid owner using a gang to blackmail victims. All you need the season pass to get access to those.

On March 23 there’s also the first four-player co-op Tactical Op, called Leader of the Pack. Ubisoft are promising even more content after that, including new characters and the inevitable ‘more’.

How do I book an NHS Covid vaccine appointment