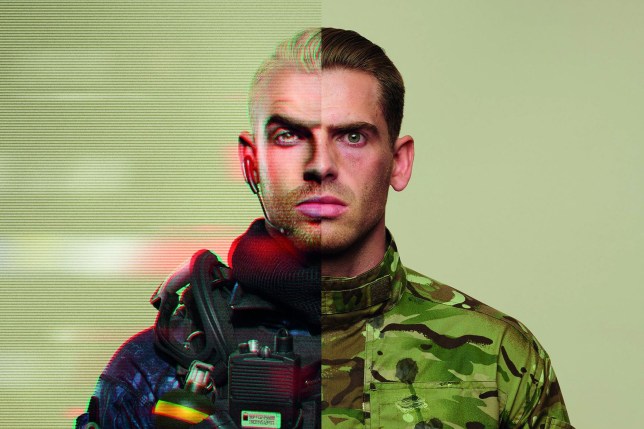 GameCentral visits the Imperial War Museum exhibit that shows the changing way that war and the military has been portrayed by video games.

The Imperial War Museum in London offers many physical reminders of the duality of war, with a towering 15-inch naval gun, whose 2000lb shells have a range of 16 miles, sat right next to a Tibetan Peace Garden. While exhibitions usually centre around real-life stories of historical conflicts, the museum is currently exploring why war makes such compelling video game entertainment and how the thrill of a perfect head shot might be able to educate us about the tragedy of warfare.

Running between September 30 and May 28, the War Games exhibition explores the relationship between video games and conflict. It showcases unique installations, never-before-displayed objects, and commentary from industry experts to try and give a nuanced view of the issue. It will be the first time that a major museum has engaged with video games in this way, as it features a series of titles which, over the last 40 years, have reflected events from the First World War to the present.

War Games curator Ian Kikuchi told GameCentral: ‘I’m most proud of the variety of games on display. From today’s blockbuster titles like Sniper Elite and Call Of Duty, to intimate indie games like Bury Me, My Love, and compelling anti-war games like This War Of Mine, IWM’s War Games exhibition showcases the sheer diversity of war stories being told through video games, with titles spanning more than 40 years of gaming history, alongside unique artefacts from IWM’s historical collections.’

The first room of the exhibition explores how before video games, tabletop gaming allowed players to explore the rules of conflict, from chess to war on the high seas with games like Battleships; historically humans have always wanted to strategise and lead an army into battle from the safety of the living room.

The next room features video footage of a number of consultants from gaming and academic backgrounds, who helped bring the exhibition together. GameCentral spoke to Violet Berlin, star of the early ‘90s gaming and technology TV show Bad Influence.

‘I was completely thrilled when I was asked to be a consultant on this exhibition, they really listen to what the experts had to say and changed and adapted the content accordingly,’ she said. ‘I asked for there to be more playable games and was overjoyed that they added the retro games area.’

The exhibition’s lead sponsor is Rebellion, publishers of Sniper Elite 5, who have supported the museum’s research into how different developers have portrayed conflict and how first person shooters, one of the most popular videos game genres, can reflect an uncomfortable real-life brutality. 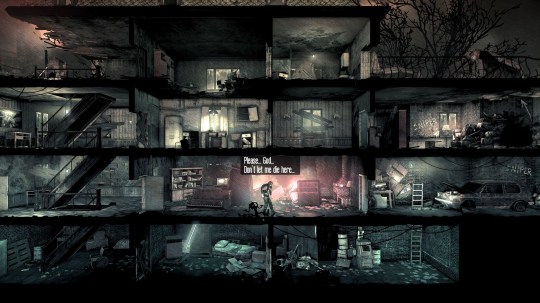 This War Of Mine is a very different kind of war game (pic: 11 bit studios)

As you move through the exhibition, the showcasing of games such as Bury Me, My Love and This War Of Mine explore how game developers are now approaching war and conflict in increasing innovative and empathetic ways. This War Of Mine forces you to make literal life or death decisions that are disturbingly plausible and rarely have a happy ending, with Polish developer 11 bit studios focusing on the victims of war instead of the perpetrators.

War stories can be told through human relationships and experience. French developer Florent Maurin designed Bury Me, My Love to put players in the shoes of Syrian refugees. Separated and desperate, the family communicates through text messages, giving an intimacy to their struggle and resulting in multiple endings depending on the messages you choose to send. In the exhibition, video games content is paired with real life artefacts and the old blanket next to Bury Me, My Love is heartbreaking.

Dr Matthew Barr from University of Glasgow, an expert on games for learning, told GameCentral: ‘I think games are an excellent way of learning about the horrors of war. They are immersive and allow you to be empathetic and walk in someone else’s shoes and that’s what excited me about working on the exhibition.’ 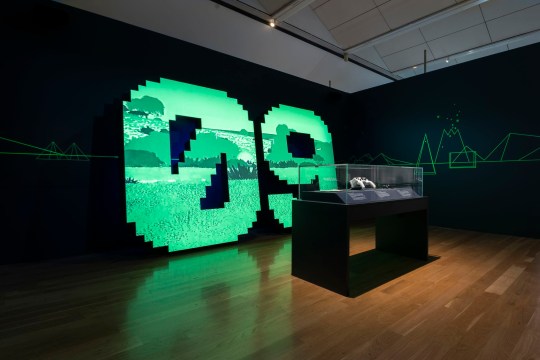 In the 1983 blockbuster War Games, Mathew Brodick sees how even the most rudimentary video game technology can be used by the military industrial complex to explore and shape conflicts and their outcomes, blurring the lines between real life and virtual reality. Just as Atari’s 1980 tank combat game Battlezone caught the eye of the U.S. military, who developed a prototype version of the game to train tank gunners.

While games like noughts and crosses have made way for the ultra-realistic environments of modern games, the last room of the exhibition features examples of how gaming hardware and the needs of the modern military has led to the gamification of war. There’s an Xbox 360 controller on display that has been modded for drone reconnaissance and a tank simulator gunner’s handle that sports a design obviously inspired by console control pads.

Case studies featured in the exhibition explore how war video games offer entertainment based on realistic depictions of war, which, unlike the real thing, disappear when you turn off the console or PC. Even the cartoonish world of Worms, with its hand grenades and bazookas, has an element of realism, and yet risks de-humanise conflict and its survivors and victims.

Crossing the hall from the main exhibition you are invited to put theory into practice in a retro gaming arcade called Area 10, where we spent far too much time playing iconic titles such as Hogs Of War, Top Gun, and After Burner on consoles ranging from the Atari 2600 to the Sega Saturn.

As Tom Roberts from the Too Much Time On Our Hands podcast says: ‘I was asked to get involved as I’m a gamer. I am one of the people who consume the media the academics are talking about. War is a fascinating thing, as a player you can reload and respawn, but those actively fighting and participating in a war can’t.’