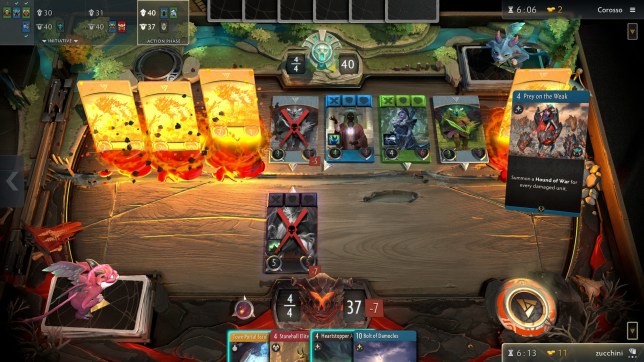 It didn’t quite get as popular as Magic: The Gathering (Pic: Steam)

Dota 2’s card game spin-off Artifact was meant to be rebooted, but Valve has instead shut down the beta and made the game free for everyone.

Remember how EA and BioWare promised to reinvent Anthem after its rough launch and bring it back as an improved experience only to end up cancelling it altogether? Well, a similar situation has happened with Valve’s Artifact.

A spin-off of the multiplayer online battle arena game Dota 2, Artifact is a digital card game designed by Richard Garfield, the man credited with creating Magic: The Gathering.

It released on Steam back in November 2018 and ultimately failed to build much of an audience. A beta of the reworked Artifact 2.0 released in March last year but, once again, it lacked active players, resulting in Valve shuttering the project entirely.

‘It’s now been about a year and a half since the current Artifact team began work on a reboot in earnest,’ reads the update on Steam. ‘While we’re reasonably satisfied we accomplished most of our game-side goals, we haven’t managed to get the active player numbers to a level that justifies further development at this time. As such, we’ve made the tough decision to stop development on the Artifact 2.0 Beta.’

Fortunately, for anyone who does still play it, the game isn’t going anywhere. Final releases of the original Artifact and Artifact 2.0 (rebranded as Artifact Classic and Artifact Foundry respectively) are now available and are free. Not free-to-play, free though, so there’s no buying cards with real money, something the game was initially criticised for as it was likened to being pay-to-win. Valve does note that Artifact Foundry is technically unfinished, but it is in a playable state.

Marketplace integration has also been removed from Artifact Classic, but any cards that have been purchased have been upgraded into Collector’s Edition versions and can still earn Collector’s Edition packs through play. Anyone who plays the new, free version unfortunately can’t earn these packs.

‘We’re grateful to all Artifact players, and particularly to those who were able to help us tune and refine what would become Artifact Foundry’, adds the update.

‘The team feels this is the approach that best serves the community. We’re proud of the work we’ve done on both games and excited about delivering them to a much larger audience of gamers.’

Artifact Classic and Artifact Foundry are available on Steam.