Creative Assembly has announced the final entry in their Warhammer trilogy of strategy games and it looks pretty diabolical (in a good way).

As renowned as the Total War games might be for their various historical epics, arguably the best games in the series are the Warhammer fantasy games.

The first one was released in 2016 and the second one in 2018 and now the final part in the trilogy has been announced for sometime later this year.

As the last part of the story the plot is suitably apocalyptic and involves daemons from the Chaos Realm fighting the traditional races and a number of newer ones that haven’t been in the games before.

The Kislev are a northern race whose ice queen you can see in the trailer above, while the Cathay are based in the far east of Warhammer’s world and are modelled on ancient China.

The main enemy for everyone is the Realm of Chaos, including the demons Khorne, Nurgle, Slaanesh, and Tzeentch – who also feature in the pre-rendered trailer.

You’ll be able to play the game as a standalone release, ending with a trip to the Chaos Realm and the choice to either save a dying god or exploit their power.

As has been the plan from the start though you’ll also be able to combine all three games together, so you have access to the whole Warhammer world and all its different factions.

With Warhammer in general enjoying an elevated level of popularity at the moment, thanks to the lockdown, this couldn’t have come at a better time. Henry Cavill is going to be over the moon. 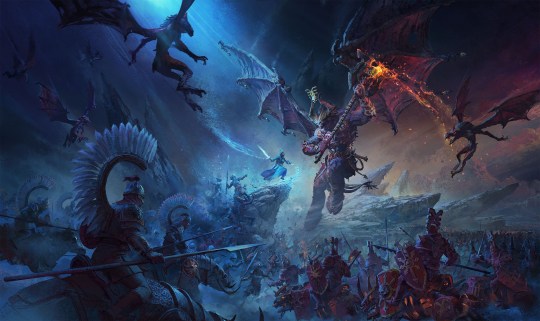 Where can I watch Contagion after Matt Hancock vaccine reference?