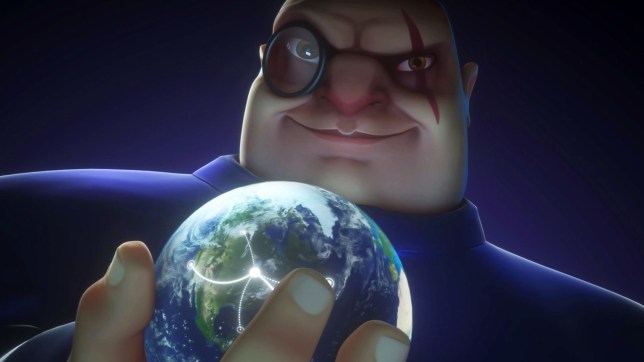 A reader takes a satirical look at the perils of being a video game bad guy and the peculiar tropes and traditions that are taken for granted.

It’s not easy being a video game evil genius.

And it isn’t cheap either. When you think about the cost of my own personal island, sentient self-destruct system, maniacal laugh voice coach etcetera, etcetera – it soon adds up.

Plus, I have killed my loyal deputy for making a mistake so many times that no-one else wants the job.

So when I expand my evil empire this time, I’m going to get it right.

With non-essential businesses allowed to re-open from Monday, now is the time to recruit for these vacant positions:

Bullet Time Co-Ordinator
Have you ever noticed how time moves more slowly when you are breaching a door, taking on six enemies at once or waiting for a tube train on the District line? We need you to bottle that and allow us to manipulate time itself. The limits of human endurance? Basic physics? Pah! We don’t care about pesky things like that, as long as it looks cool. Plus, the ability to make time move faster whenever Piers Morgan is speaking would be a huge advantage.

Bad Guy T-Shirt Maker
Did you manufacture bad-guy T-shirts in the Far Cry, Tomb Raider or Uncharted series? If so we want you to join our team. Up to 12 times more effective than Stormtrooper™ body armour, the T-shirt will take up to half-a-dozen handgun rounds before showing any holes.

Crate Maker
I have huge amounts of nothing in my suspiciously large warehouse – you know, the one with the dark doorways and gaps in CCTV coverage? So could you please make some crates to store all that nothing in? Perhaps you could put some body armour or medical supplies in every tenth one to make it a bit more interesting? Try-hards are not welcome, as we need your crates to be so uselessly flimsy they fall to bits when hit with a crowbar.

Health Regenerating Syringes
Getting shot in the head with an automatic rifle is pretty terminal for most people’s health. So if you can revive them with just a syringe then we sure as hell would like to know what you put in them. It’s much cheaper than cloning another 50,000 bad guys. Oops, not cloning, I meant ‘recruiting’…

Blood-Be-Gone
Sometimes I’m starring in a ’12’ rated game, so it would be a bit inappropriate for the big climatic shoot-out to look like something from a John Woo movie filmed in an abattoir. So if you can cover it up with some Blood-Be-Gone (patent pending) to make it all go away, we would like to hear from you.

Turret Maker
Can you make a really big minigun? Preferably a non-portable one, so any good guys can’t just carry it with them when sneaking onto my secret base. Speaking of good guys, they seem to have infinite ammunition whenever they use one – so making a gun like that would be great.

Item Shop Owner
Why would I want someone running an item shop that sells to heroes you ask? Well, as long as all the items capable of killing me are prohibitively priced I should be fine. Underestimating plucky underdogs never does mad, bad guys like me any harm. Plus, they don’t have a minigun. The only thing I stipulate is that despite selling weapons to highly armed fearsome tough guys, you are immune to robberies and theft.

Dictaphone Bulk Buyer
If things start getting scary in our genetic experiments lab, make sure to record your every thought on the latest technology of the 1940s. We also need someone to organise a bulk-buy at a discounted rate, or at least buy up a load of second-hand ones on eBay.

Head of PR for our ‘Umbrella Corporation’
We are hiring through a limited company to reduce our liability. The position is open due to a previous employee suffering from ill health. Master of unlocking preferred. Ability to make Jill sandwiches an advantage. Applicants must not faint at the sight of Chris’s blood.

Red Barrel Maker
This is a lot of fun, even if your life expectancy is less than that of a kamikaze pi… BOOOM!

Please send your CV and a covering letter to the address below: