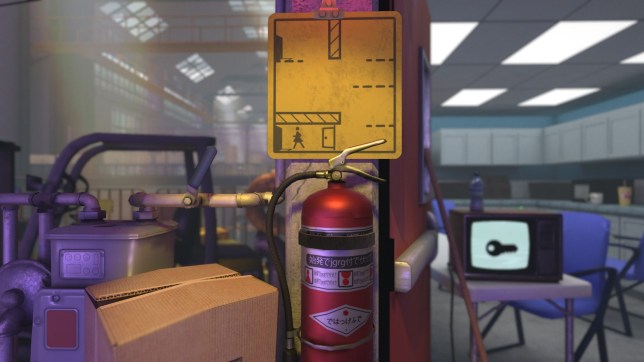 Ingenious puzzles combined with impressive graphics and music make The Pedestrian one of the best indie games of the year so far.

Over the last 15 years our lives have become increasingly littered with touchscreen devices, which join the more traditional mouse and keyboard as easily the most viable methods of solving puzzles in games. Small, precise motions and the ability to click, tap or drag anywhere on screen make them far more suited to the genre than the comparatively blunt instrument of a controller.

The Pedestrian sidesteps this issue by making its puzzles big, bold, and easy to manipulate, as well as splicing in platforming action, something that controllers have always been uniquely good at. It does all that by giving you control of the male or female stick figure familiar from lavatory signage, your task being to track down and rescue your counterpart of the other gender by solving a series of ingenious multi-layered puzzles.

Although set in a charming and colourful recreation of the real world, the puzzles themselves take place solely in 2D signage hanging or stuck to surfaces in the 3D landscape that surrounds them. You enter a sign, your stick figure hopping up and over obstacles before heading to an exit that takes him or her to the next challenge, the game’s camera gliding elegantly over to the next poster or warning plaque.

Most signs are split up into a number of discrete sections, which you can move around their wall spaces. Doors and ladders have semi-circular handles next to them, which you grab and drag to counterparts in other rooms, creating new connections. Once you’ve positioned and linked all the parts of a puzzle, you switch back to platforming mode and use your newly created passageways to make your way to the exit.

Naturally, there are rules you have to follow that make this process progressively more involved. Firstly, although you can pause part way through a puzzle and rearrange rooms and connections, once your stick person has travelled between two rooms, in most cases changing that connection resets your progress – a feature you can sometimes use to your advantage. There are also puzzles that span numerous separate screens, each solution gifting you a piece of equipment necessary to make your way through the central problem.

Part of The Pedestrian’s magic is that it imparts what is quite a complex set of rules and characteristics using no words whatsoever. There are pictorial clues in the form of Post-It notes fluttering gently in the breeze, on the periphery of puzzles, or scrawled diagrams on a noticeboard letting you know when you’ve collected each of a screen’s necessary components, but almost all of your learning is through experimentation and play.

Another thing that sets it apart is its beautiful Danny Elfman-esque soundtrack. It fades as you move rooms around, swelling and filling out as you complete platform sections. Sometimes it disappears altogether, coming back to highlight an event or the solution to a particularly challenging sign, and changing each time you travel to a new part of town. It’s rarely less than enchanting, infusing the game with a sense of wonder and purpose.

It also perfectly complements the backdrops with their blue skies, colourful buildings, and captivating levels of detail. The signs you explore may all be 2D, but the world in which you find them is bustling and complex one minute, pastoral and green the next. It makes your puzzle solving feel like an epic journey, your tiny stick person dwarfed by the city beyond.

Puzzles gradually ratchet up their complexity, adding switches, lifts, locked doors, trampolines, and laser beams that instantly turn your character into a blurry inkblot. At times you’ll need to stack rooms on top of one another, Gorogoa-style, creating linkages and escape routes in otherwise sealed chambers. And your actions in the 2D realm soon start having effects in the real world, like opening gates, triggering lifts, and taking you for rides on underground trains. 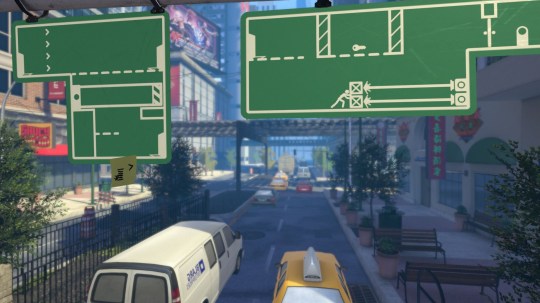 The Pedestrian – lasers can be a real pest (pic: Skookum Arts)

Given the limitations of its structure, The Pedestrian uses cinematic pacing to keep you on your toes. You’ll breeze through some rooms, while others appear impossible, resisting logic and reason until there’s a sudden eureka moment and you’re off again. It gives the game a nicely metered variety that prevents it from becoming either too simple or too taxing, maintaining a steady flow of novelty, fresh ideas, new musical styles, and gorgeous backdrops.

There are moments of frustration, mostly stemming from puzzles with lasers, where one false move or short jump resets you to the beginning of the screen. Although you only lose a minute or two’s work, having to do that multiple times does start to grate. There are also moments when the interface can feel a little fiddly, but those are few and far between.

As a whole, The Pedestrian is a visual and auditory treat that works at least as well on PlayStation as it did on PC. There’s something wonderful about the way everything fits together: the smooth movement of the stick figure in their intricately connected flat world juxtaposed with the beauty and scale of the real world that surrounds it, all accompanied by jaunty and occasionally sweeping melodies.

It’s a delightful place to spend time, and while its puzzles never reach the savage, cryptic crossword-like difficulty of The Witness, they’re often tricky enough to get a good endorphin hit when you finally figure them out. Clever, beautiful, and clearly a labour of love, The Pedestrian is exactly the kind of ray of sunshine we could all do with in a frigid, grey lockdown winter.

In Short: An ingenious, colourful, and gloriously framed platform puzzle game that effortlessly blends 2D puzzles with the 3D world that surrounds them.

Cons: There isn’t much replay value once you’ve seen everything, and there are occasional points of irritation caused by repeated accidental death by laser beam.