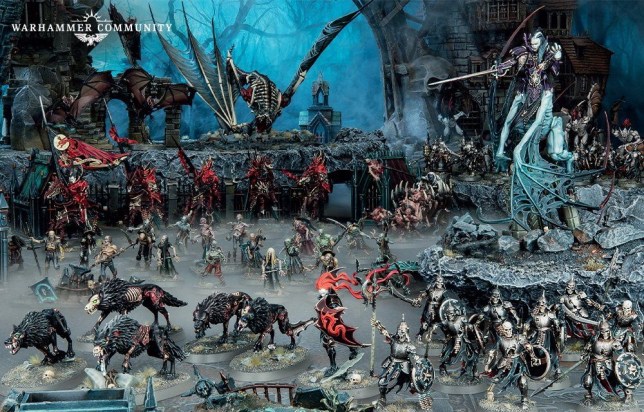 GameCentral looks at 10 horror themed tabletop games, including a a black metal take on Dungeons & Dragons and Pandemic: Reign of Cthulhu.

This week many gamers will be drawing their curtains and trying to avoid Lady Dimitrescu‘s stabby fingered advances in Resident Evil Village. Unfortunately, Resident Evil games are notoriously short and if you’re still looking for some scares after completing it, it’s worth considering a role-playing or board game which can extend your screams across several months – if your dungeon master is sadistic enough.

After all, why fight the forces of evil alone when you can get some friends together and tackle Cthulhu co-operatively?

Whether it’s sneaking past serial killers, exploring a haunted house or avoiding a vampire’s advances, horror themes are surprisingly successful when translated to role-playing and board games. With more scope to let your imagination run wild, these games will give you nightmares just as effectively as any video game. 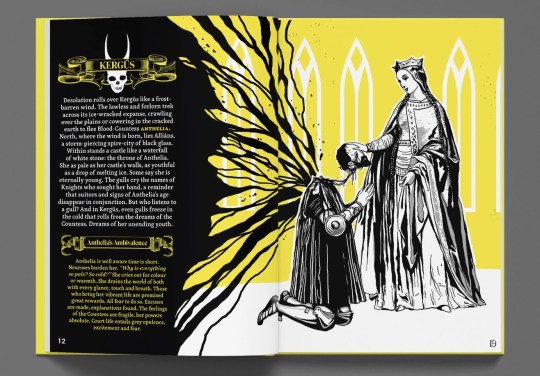 Mörk Borg is Swedish for Dark Castle and this award-winning role-playing game is a black metal take on Dungeons & Dragons. Swedish game designer Pelle Nilsson and graphic artist Johan Nohr have taken core role-playing rules and added a bucket load of brutality. Short but stunning, the sourcebook is only around 100 pages and many of those are scratchy sketches of despicable characters. With details of disturbingly sinister locations sitting next to pages glinting with gold and silver crucifixes, Mörk Borg comes across as a tiny hallowed tome barely betraying its indie zine roots.

If you usually play a bard you might want to try your hand at one of the more inventive character classes available, such as Gutterborn Scum or Heretical Priest. The game is so cool it even has its own “Dungeon Drone” soundtrack on cassette, by Heimat Der Katastrophe – an Italian DIY ambient punk label. Mörk Borg is a surprisingly successful and sinister intersection of headbangers and horror role-playing, so make sure to back their new project Heretic on Kickstarter. 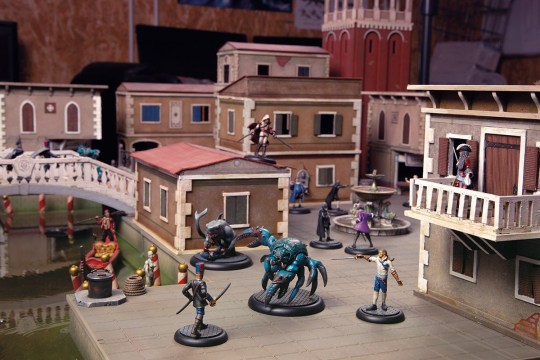 Carnevale – wasn’t there an episode of Doctor Who like this?

Gondoliers gone bad. Carnevale is a miniature skirmish game, set in the twisted city of Venice in 1795. Magic has awakened ancient monsters from their submarine slumber and they now slip through the canals while the citizens of Venice do the best they can to survive under the protection of the Guild of Thieves.

The game comes with a number of 28mm metal models, supported by a simple game system with enough tactical depth to please most wargamers but also appeal to beginners. The box contains everything that two players will need to dip their toes into the rotten, rising rivers of Carnevale. This is a game with movement at its core, so be ready to swim, row, climb, and jump your way across the foetid canals.

With everything you’d want from a narrative skirmish game, skulking though sinister passages, assassinating enemies from the eves of the Rialto Bridge, or drowning masked malevolencies under the water, Carnevale offers unique and original three-dimensional gameplay. 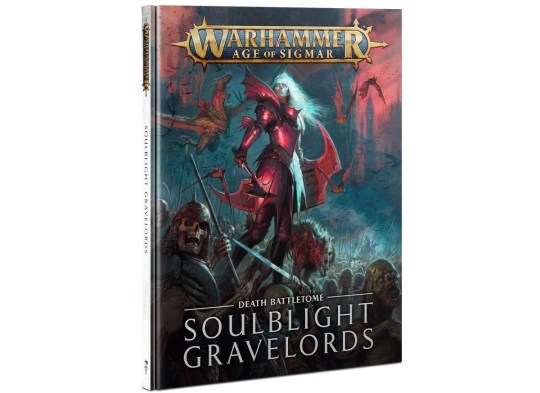 Warhammer Age of Sigmar: Vampires – hot off the press

One of the biggest announcements at the Warhammer Fest Online this week has been some impressive new vampires for Age of Sigmar, which follows Cursed City – last month’s highly popular new Warhammer Quest. It seems the undead are on the march, so it’s definitely time to consider building a new bloodsucking army as soulblight vampires join forces with the soulblight gravelords.

Leading legions of zombies, skeletons, and bats in their conquest are the Vampire Lords: immortal tyrants with their elite vampire Blood Knight cavalry. Although you can find the warscrolls for all these units in the new Soulblight Gravelords battletome.

Just be sure to invest in army commanders such as Lauka Vai, the Mother of Nightmares, and Radukar the Beast, who are some of the most striking and strongest undead in the Mortal realms. 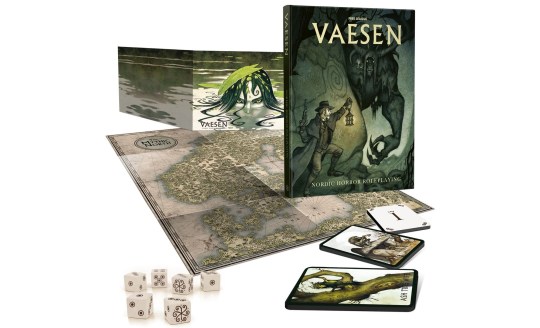 This immersive Nordic folklore horror is a great starter role-playing game, set in a tragic chilling world of Scandinavian supernatural senses, invisible beasts, and spectres. The Vaesen are an invisible population, including werewolves and giants, that inhabit a world of rapidly changing ways, where industry and technology are encroaching on the farms and woodlands where the Vaesen coexisted with humans.

But the Vaesen are tough and you’ll have to find a way to outthink them rather than outgun them. The books are full of detailed maps, characters, and creatures rendered in the tones of twilight. Suitably deep mechanics manage to avoid excessive technicality, making this a fluid and action-packed experience.

You roll a certain number of six-sided dice, where each six represents a success. As a player you have the Sight helping to re-establish an ancient organisation called The Society to keep the Vaesen in check and establish some kind of stability to a newly industrialised world.

Mansions of Madness – save the world

A massive box full of mystery and miniatures. Strong storytelling, clever puzzles, and nerve-wracking mythos, this is a good old-fashioned Lovecraftian dungeon crawling experience. An app-assisted board game for one to five players, it will take you around two to three hours to complete. The app handles everything and makes for an extremely polished and streamlined experience, with storyline, music, combat, HP tracking, map layout, and atmospheric effects all taken care of for you.

You play as investigators navigating the veiled streets of Innsmouth and the haunted corridors of Arkham’s cursed mansions, as you search for answers and respite. You must stand ready to confront four separate scenarios, collecting weapons, tools, and information; solving complex puzzles; and fighting monsters, insanity, and death. Room tiles and counters sport spectacular artwork and the attention to detail makes giving up so much shelf space worth it. 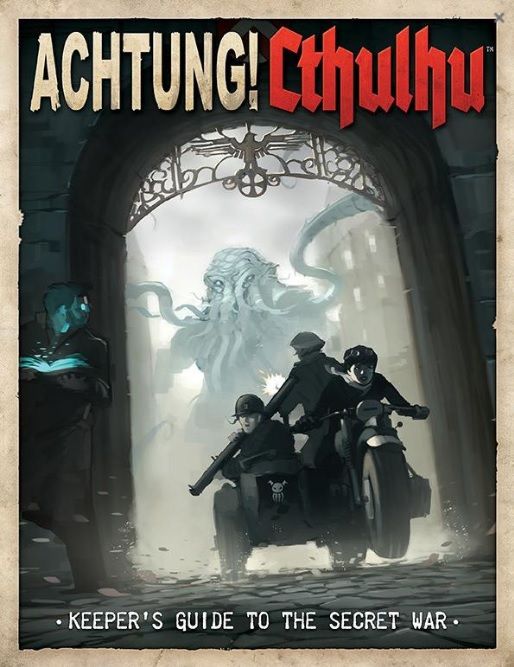 World War 2 with tentacles. Here history and fantasy collide, as you fight to overthrow a nightmare alliance of Nazi science and the occult. Character creation is central to this role-playing, where you can play as classic wartime heroes ranging from RAF pilots to Soviet political officers, London newspaper hacks, Hollywood celebrities, and struggling resistance fighters.

Originally created in 2012 and inspired by a visit to Minsk War Museum, this sophisticated role-player now has enough supplements that you can play a full campaign starting in Castle Karlstein, Czechoslovakia circa 1939 and ending up in the Mountains of Madness in Antarctica in 1946.

During your campaign you really feel the crushing weight of unstoppable eldritch forces conspiring against humankind, which is just what you want for a horror game. Split into two books – Investigator’s Guide and Keeper’s Guides – it now uses Modiphius’ in-house 2d20 system, meaning the company can expand a new horrific universe around it. Yog-Sothoth and the Elder Gods willing. 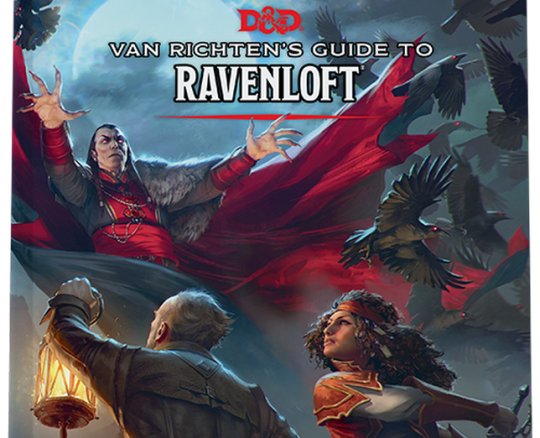 Due out on May 18, Van Richten’s Guide to Ravenloft is a book that compiles multiple spooky scenarios for your role-playing party. Monster scholar Rudolph Van Richten wants to arm a new generation of players against the creatures of the night, his correspondence and case files forming the foundation of this book. Travel with your party through the Domains of Dread, each of which explores its own unique flavour of horror, with a unique cast of ghastly characters and beasts.

Using the book, you can explore new character subclasses where warlocks can flirt with fate using undead pacts and bards can attain the powers of the afterlife using The College of Spirits. Beware the advances of the vampire darklords, though, who can create half-vampire/half-human creatures called dhamphir, who are born with all of a vampire’s strength but are not usually affected by sunlight or the hunger for human blood. 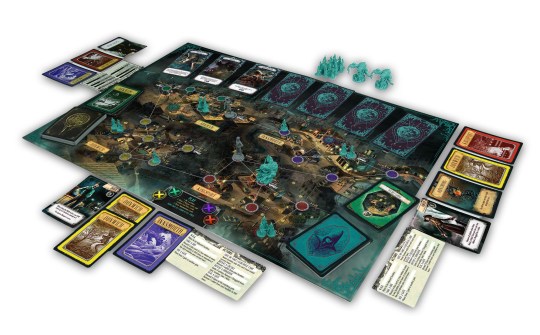 Pandemic: Reign of Cthulhu – who knew Cthulhu was behind it all

As if pandemics weren’t horrible enough, eh? Built upon the same rules as the core Pandemic game, which has become increasingly popular over the last year, Reign of Cthulhu is more than a simple reskin as it introduces new Lovecraftian horror elements. 12 Old Ones are spreading ancient evil in New England, as the game takes a less global view of things and allows you to focus on a much more intimate and atmospheric play style.

You play as investigators fighting cultists intent on summoning shoggoths and one of our favourite addition to this game is that these characters are all represented by miniatures rather than the abstract faceless cubes in the vanilla Pandemic. More compact but still retaining a sense of chaos and insanity, you might not be coughing yet but watch out, as Cthulhu is coming! 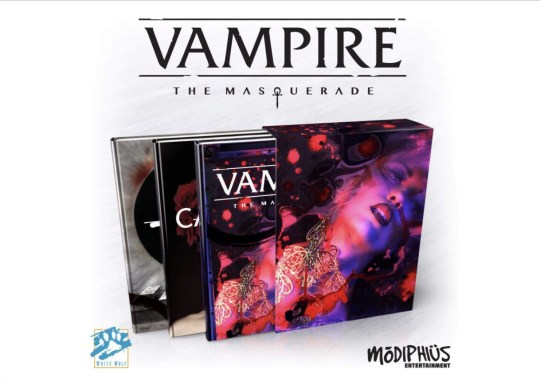 Vampire: The Masquerade was hugely popular on original release in the early 90s and had pride of place next to Smashing Pumpkins albums in every goth’s front room. Now in its fifth edition, this is an elegant, timeless game with flexible dice mechanics that reinforce the battle between hunger and humanity, allowing you to play the game in a way that fits your party. As a vampire there’s a constant struggle between the personal and the political, as you pick one of 13 clans to join and protect.

Intrigue and conspiracy abound as you try to fight your overwhelming thirst in beautifully crafted letters, e-mails, and extracts about the World of Darkness. Roll dice for health and willpower but be aware that dropping to zero willpower can have some serious consequences. Complex and dramatic, Vampire: The Masquerade is a commitment and a way of life. 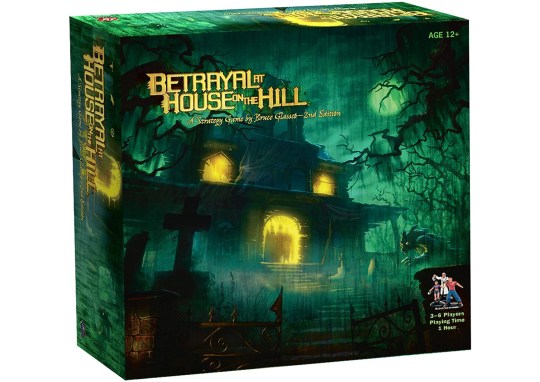 If you’re a fan of the shlock horror sarcasm seen in Scream then Betrayal at House on the Hill is the game for you. It allows for three to six players and takes around 60-90 minutes to get through. Inspired by 80s cheeseball horror movies, you play as explorers who have just entered a creepy old haunted house.

The betrayal is that, secretly, one of the characters is working against the rest of the party, helping a zombie serial killer pick you off one by one, and you must work together to defeat the traitor in your midst before it’s too late. There’s a choice of 50, relatively short, story-driven scenarios that make this game very replayable and super popular at parties. 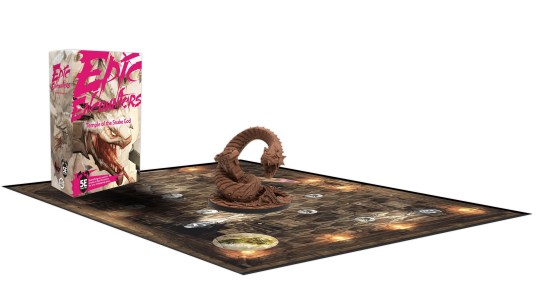 After Dracula, Bram Stoker wrote The Lair of the White Worm, which was transformed into a comedy horror in the 80s by Ken Russell. Coming in July from Epic Encounters, it will allow dungeon masters to spice up their Dungeons & Dragons game plan with a scary giant snake scenario and includes an impressively slithery snake god miniature pre-assembled and ready to go.

Temple of the Snake God takes you into the depths of the ruined temple where the great snake slithers – a relic of the ancient civilisation it was created to protect.

Publisher Steamforged has been a bit obsessed by monsters lately, culminating in a Kickstarter campaign for an adaptation of Monster Hunter: World, which raised almost £3.5 million and should be released late next year.