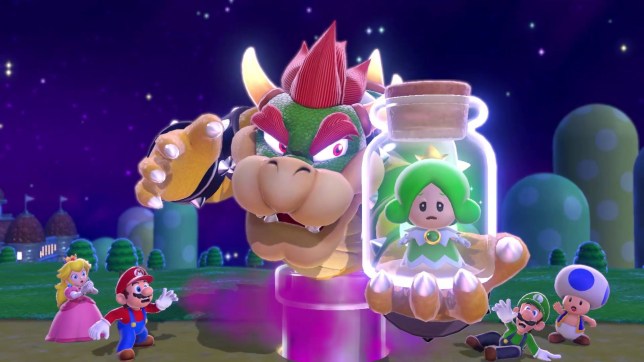 Super Mario 3D World – for once Peach has not been kidnapped (pic: Nintendo)

Nintendo finally release one of the Wii U’s best games on the Switch and bundle it with a brand new, and surprisingly innovative, new Mario game.

Once Super Mario 3D World + Bowser’s Fury comes out this week Nintendo will have precisely zero first party games scheduled for this year. Zelda: Breath Of The Wild 2 and Metroid Prime 4 are due at some point in the nebulous future and there are third party titles that they’re helping to publish, like Bravely Default 2 and Monster Hunter Rise, but in terms of games they’ve made themselves there’s nothing – even New Pokémon Snap is being developed by Bandai Namco.

Previously they’ve been able to use Wii U ports to paper over gaps in the Nintendo Switch’s release schedule but that well has now almost run dry. After this, there’s really only Xenoblade Chronicles X left that is universally loved (we quite liked Star Fox Zero but nobody else seemed to), before you start scraping the bottom of the barrel. Super Mario 3D World though is one of the crown jewels, one of the best games on the Wii U and a clever halfway house between the 2D Mario games and 3D titles like Super Mario Odyssey.

The only similar game is Super Mario 3D Land on the 3DS, to which this is nominally a sequel. Neither game really has a plot but most stages in both use a semi-fixed camera view (you can move it a bit, but you never have to) where you have full freedom of movement but only within the game’s purposefully small environments. The original intention was no doubt to make a more accessible style of 3D Mario game, when compared to the then recent Super Mario Galaxy titles, and to move beyond the deeply conservative New Super Mario Bros. U.

Super Mario 3D World is a great game but there’s not an awful lot we can add about it that we didn’t already cover in our original Wii U review. That’s not to suggest that this is a lazy remaster though, as unusually for Nintendo it makes a notable change to the gameplay by increasing the speed of the playable characters. Although if you’ve never played it before you’ll never believe it was ever anything else, as the current pace feels perfect.

There’s no substantial new content in the Switch version of the game but you do have the welcome new option of four-player online co-op, as well as just local. This even includes the Captain Toad levels, as unnecessary as that seems, and the collectable stamps that were once used in Miiverse have now been repurposed to make them available in a new photo mode.

Although the game is stacked full of things to do, and will last any player a dozen or so hours, many will no doubt balk at the idea of being charged full price for what is not far off from a straight port. To head off such complaints the original Super Mario 3D World is accompanied by a second brand-new game, called Bowser’s Fury. It shares the same obsession with cats (a cat suit that lets you climb up walls is one of the major power-ups in both) and a few enemies and boss battles but is otherwise entirely its own thing.

And by that we mean you have full freedom of movement and camera control, the same as Odyssey and completely different to 3D World. However, unlike any other Mario game you’re running around a single open world environment. The area of Lake Lapcat contains several islands, which in other games would be separate worlds you access from a central hub but here you just swim across to them – ideally on the back of Plessie the plesiosaur. It takes a while to open up the whole map, but it all links together very well and is crammed full of enjoyably well-hidden secrets.

Once again, there’s very little in the way of plot but Bowser has somehow got covered in some kind of evil black gunk and grown to Godzilla-like size, leading to Bowser, Jr. recruiting you to turn him back to normal. (Bowser, Jr. can be controlled locally by a second player but can help in only a very limited manner, similar to the co-op mode in Odyssey.) For most of the time Bowser remains dormant in the centre of the map but will occasionally wake up to attack you, shooting out blocks of lava that can be used as platforms or accidentally destroying otherwise impervious blocks.

To send him back asleep you have to collect a cat shine and once you’ve got enough of them you can access a special cat power-up that turns you into a lion-like kajiju and allows Bowser to pick on someone his own size. For what was initially implied to be only a small bonus game Bowser’s Fury is packed full of unique ideas and takes a good six hours to get to just the basic first ending. The level design is clever, the graphics attractive, and while it’s never as difficult as Odyssey gets by its end there are still some enjoyable challenges. 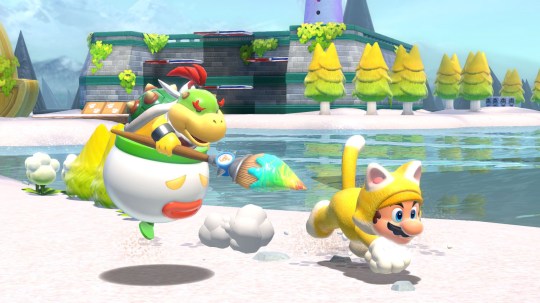 We get the impression, based purely on the fact that we hardly recognised any names in the credits, that this was some kind of experiment by a new team at Nintendo and if that’s the case it’s a great achievement (and if it was by older veterans it’s impressive that they can still come up with so many new ideas). The one obvious problem though is the seemingly random behaviour of Bowser, which is bound to irritate some people.

We’ve 100%-ed the game and we still don’t understand what makes him wake up or go to sleep, other than a shine. Sometimes he’ll disappear after less than a minute, sometimes he’ll hang around for seemingly ages and we’re not sure why. What we do know is that he often appears right in the middle of a tricky platform sequence, although there’s no step that can’t retraced in just a minute or two, so he’s never actually as annoying as you think he’s going to be.

Not only is Super Mario 3D World worth the price of entry alone but so too is Bowser’s Fury, assuming that price was somewhere around the £25 mark – to acknowledge the game’s relatively short length. Together though this is a superb package and also the perfect counterpoint to anyone that suggests all Mario games are the same and that Nintendo should do something new.

Bowser’s Fury is completely new and, as is typical with Nintendo, there’s no clue as to whether it’ll end up as a one-off experiment or the future direction of the whole franchise. But you could go mad trying to understand Nintendo’s logic, or predict their future plans, and for now, as always, all that matters is that they have once again delivered a classic gameplay experience… or two.

In Short: One of the best modern Super Mario titles is made that little bit better and accompanied by a brand-new game that bends the formula in new and exciting ways.

Pros: Super Mario 3D World is full of wonderfully designed stages and has the best selection of power-ups in any Mario game. Bowser’s Fury is unexpectedly innovative, with a great open world environment.

Cons: Although Super Mario 3D World has some harder levels in its endgame neither title is very difficult for the majority of the time. Bowser’s appearance in Bowser’s Fury can frustrate.

Foo Fighters, Jay-Z and Kate Bush among finalists for Rock and Roll Hall of Fame 2021