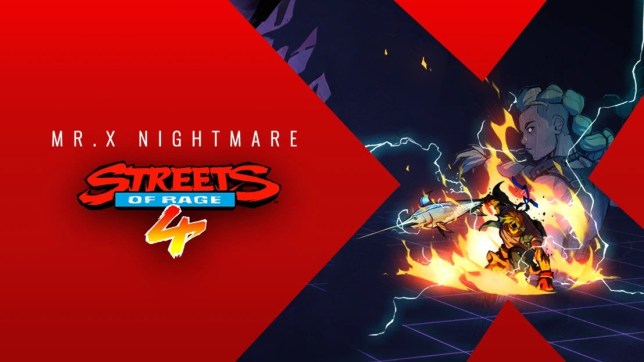 Estel is in (pic: Dotemu)

The much anticipated DLC for Streets Of Rage is called Mr. X Nightmare and will include a host of new characters, modes, moves, and music.

Last year’s Street Of Rage 4 was one of the best retro revivals in a long time and has started a mini-renaissance of old school beat ‘em-ups, that now includes everything from Asterix & Obelix to Teenage Mutant Ninja Turtles.

Publisher and developer Dotemu has been talking about DLC for Streets Of Rage 4 for months and already seemed to hint that boss character Estel Aguirre would become a playable character, and that’s exactly what’s happening.

The Mr. X Nightmare DLC will feature three new characters though and currently the other two are being kept secret. You can see them teased in the trailer below but given the hair metal haircuts of many of the game’s characters it’s hard to guess who the silhouettes might be.

The DLC will also add a new survival mode, although Dotemu is purposefully not saying how it works at the moment.

There’ll also be new moves for existing characters, plus new weapons and enemies, as well as a customisation tool so you can choose which moves you take into battle with you.

Meanwhile, the new music will be by Tee Lopes, who’s worked on games such as Sonic Mania, League Of Legends, and Monster Boy And The Cursed Kingdom.

It all sounds like good stuff but if you’re not tempted then a separate free update will also be released at the same time as the paid-for DLC. This will include a New Mania+ difficulty, a new training system, and new colour options for existing characters.

According to Dotemu the game has now sold 2.5 million copies across Xbox One, PlayStation 4, Switch, and PC which is highly impressive for what is essentially an indie game.

It’s no wonder that other beat ‘em-ups have been able to capitalise on the success and it now seems only a question of when, not if, there’ll be a Streets Of Rage 5.