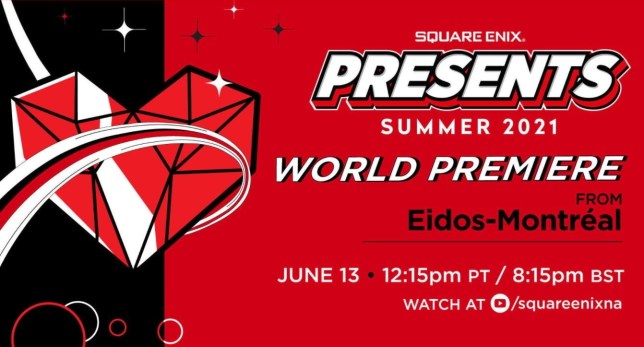 How can there be Square Enix without Final Fantasy? (pic: Square Enix)

Dates for the remaining E3 2021 conferences have been announced, including Bandai Namco, Take-Two, and Capcom.

E3 might be online only this year but unlike 2020 at least it’s actually happening. Most of the major publishers have announced dates for their own events already but it’s only now that we know exactly when Square Enix’s is.

Other smaller publishers are also taking part in the general E3 livestreams and while organisers the ESA have now revealed what days they’re on they haven’t said what time exactly – probably because they want you to watch the whole stream.

Whether they’ll reveal specific times later is unclear, but Square Enix’s event will take place on Sunday, June 13 at 8.15pm BST – some time after Microsoft’s has finished.

The confirmed games for Square Enix include PlatinumGames’ Babylon’s Fall, which was first announced in 2018 but has barely been heard of again since. So, if nothing else, it’s a relief to find out the game hasn’t been cancelled.

There’ll also be much more on Life Is Strange: True Colors and Life is Strange: Remastered Collection, as well as the Black Panther: War for Wakanda update for Marvel’s Avengers.

It seems inconceivable that none of them would at least be mentioned but it may be better to prepare for disappointment and take it as a nice surprise if there is something.

The only unannounced game that Square Enix is teasing is something from Deus Ex and Shadow Of The Tomb Raider maker Eidos-Montréal, which is rumoured to be a Guardians Of The Galaxy game.

The ESA’s rough timetable starts on Saturday, June 12 with the already announced Ubisoft Forward livestream at 8pm BST and then something from Borderlands developer Gearbox.

We now know that Square Enix will be on Sunday, June 13 at 4.15pm BST, followed by the Xbox & Bethesda conference at 6pm.

Monday, June 14 is Rockstar owner Take-Two and Capcom, with the E3 stream starting at 4pm BST and again featuring a number of other, smaller companies.

Tuesday, June 15 has Bandai Namco at 4pm BST, with Nintendo at 5pm BST. Although many will still be hoping that Bandai Namco show off Elden Ring most rumours suggest it won’t be present. Although the thing about E3 is you can never be quite sure what will be there…

What is the Nepal Covid variant and is it more contagious?

Loki: Fan theory on how Marvel series feeds into next Avengers film