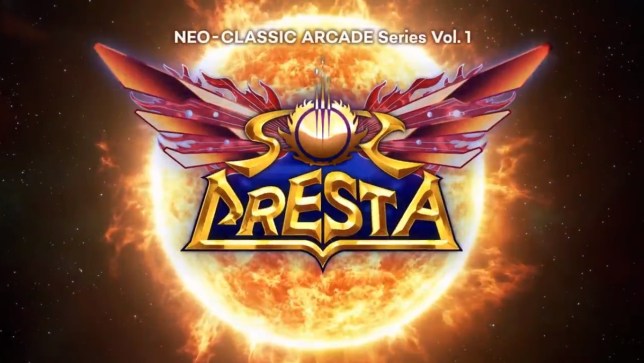 The makers of Bayonetta have insisted that last year’s April Fool about a new 2D shooter is a real project that will be released soon.

It is, thankfully, no longer April’s Fools Day, the least amusing 24 hours of the year, but for the next few days it’s still best to view anything you read on the internet with an extra layer of suspicion. Especially when it’s PlatinumGames trying to pretend something that was previously presented as an April Fool is now actually real.

Last year the fourth of the Platinum 4 games to be announced was revealed to be Sol Cresta, a sequel to obscure 1985 2D shooter Terra Cresta. Or rather Platinum pretended it was before admitting it was an April Fool.

Considering most people have never heard of the game it was all very confusing, especially as Platinum had previously said they no longer wanted to work on other people’s IP (which is why they’re not involved in the Nier Replicant remaster).

Bayonetta creator Hideki Kamiya is known to be a big fan of old school 2D shooters but he’s also known to have a peculiar sense of humour so even now, with a new video and their assurance that this is not another April Fool, we’re still not sure we believe them.

The video below does feature actual gameplay footage though, with the new game featuring similar ‘docking and shooting’ action to Terra Cresta and its predecessor Moon Cresta.

Although a fairly standard vertically scrolling shoot ‘em-up in other respects the gimmick of the series is that you can collect additional ship parts to add extra weaponry, a common concept is Japanese sci-fi and exactly the sort of thing Kamiya would appreciate given his love for tokusatsu in general.

Just to add another layer of obscurity to the project the game is part of what is described as the Neo-Classic Arcade Series, which will presumably include sequels to other retro arcade games using technology of the period.

Supposedly Sol Cresta will be released this year for PlayStation 4, Nintendo Switch, and PC, although there’s no specific date and no listing for it on Steam.

Last year’s Platinum 4 announcements were themselves highly confusing, as despite initial suggestions they only actually involved one brand new game, with the full line-up being a remaster of The Wonderful 101, a new studio, major new game Project G.G., and Sol Cresta.

They’ve used the term bonus stage before to imply that Sol Cresta, whether it’s real or not, is not actually the fourth announcement and that there’s still another major project to be revealed – but if that is the case we’re no closer to knowing what it is now than we were last year.