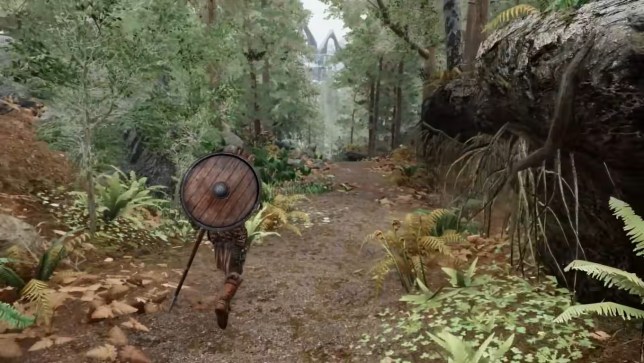 A reader explains his love for Skyrim and how the mod scene around the PC version has been keeping it relevant for over a decade.

It might be pointless, since the main contenders usually have nothing in common with each other, but everyone likes to talk about what they think is the best games ever. Zelda: Breath Of The Wild, Half-Life 2, Super Mario Galaxy, The Last Of Us… each one has an argument behind it and many of them are equally valid. For me though it’s The Elder Scrolls 5: Skyrim.

Usually with these sorts of things I’m appalled to find out that a game is a lot older than I thought, but to me Skyrim being only 11 years old seems surprisingly recent. Perhaps that’s because, in its original form, its graphics were always behind the curve, or maybe it’s because I can now barely remember a time when Skyrim didn’t exist.

People love to point out how often the game is ported to other formats but that wouldn’t be happening if the game wasn’t still benefiting from it and people weren’t playing it. I have bought it a few times myself, the last time on Switch, but most of the time I play it on my PC and that’s for one simple reason: the mods.

Although Bethesda do make an effort to bring them to their console versions, mods are, for me, the main reason to have the PC as my lead format – even more than the more powerful graphics. You can get mods for almost any game you care to mention, some of which add pointless little cosmetic extras, some of which add new gameplay, and some improved graphics.

There’s an infinite variety of other types in-between, from adding new characters to lewd content, and Skyrim has had all that and more. But because it’s an old game, that was never state-of-the-art in the looks department, the mod community has always been working on new ways to make it look better and better.

The video below is great not only because it makes the game look like something created yesterday but because it’s not the result of one mod but several all piled on top of each other. The description lists them all, but there’s mods to improve the camera, the sound, the user interface, the grass, the rocks, the water, the blood, the characters, the hair, the weather, the lighting… you name it, almost every element of the graphics have been changed out of all recognition.

Then you’ve got the gameplay changes too, with a proper dodge, improved movement, better enemy artificial intelligence, and more. There’s almost no element of the game that fans aren’t able to get into and improve. And while it can sometimes be difficult getting it all working together (especially with the Anniversary Edition) it’s worth it in the end.

Other games have similar mod communities, especially Fallout, but it’s not just people trying to ‘fix’ a game that launched with a lot of bugs or underwhelming graphics, it’s adding to a game you love and making it a sort of unofficial live service title, where it’s constantly changing and having new content.

There’s not so much of it in this video but other mods add whole new story missions and quests. And these aren’t amateur hour efforts either. One mod was so good it got turned into its own game (it had to take out all the references to The Elder Scrolls first) called The Forgotten City and won awards for being the best story based game of last year. That’s the standard of work you’re dealing with here and it’s amazing.

Even without all the mods I’d still say Skyrim was the best game ever, not just because of its inherent qualities but the fact that they’re able to inspire such love and devotion in others. No wonder Bethesda hasn’t been too worried about making another Elder Scrolls game, considering Skyrim is already unbeatable and getting better by the day.

Review scores are important and every website needs them