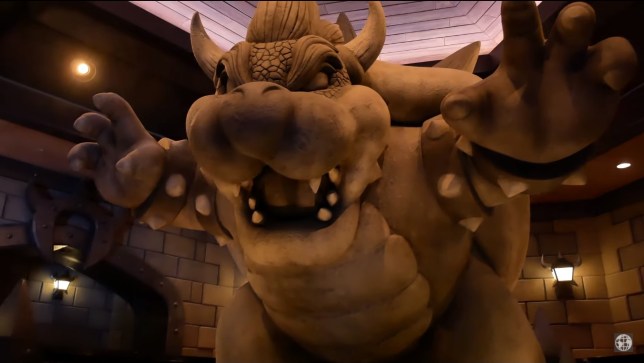 With the park officially opened, a video showing off Super Nintendo World’s AR Mario Kart ride in its entirety has been shared online.

It’s been a long time coming but the Super Nintendo World park at Universal Studios Japan has finally opened. So, unsurprisingly, those fortunate enough to visit it are sharing their experiences online.

One fan site, Universal Park News Today, has even uploaded a full demonstration of the Mario Kart ride, including not just the ride itself but the queue too.

The full video is 20 minutes long but the ride doesn’t kick off until just before the 16-minute mark, meaning queue times will likely be quite long, especially on busy days.

Nintendo was obviously aware of this because the queue itself is jam-packed with fan-service to keep you occupied while you wait. Aside from taking you through Bowser’s castle, you can spy replicas of familiar Mario Kart icons like the in-game sponsor posters and a Mario Kart TV van.

There’s a factory section that features enemies like Bob-Ombs and Mechakoopas, along with screens showing them being built. There’s even a library where Bowser has been training his team to win the upcoming race, complete with a strategy chalkboard.

As for the attraction itself, while the footage is hardly a substitute for actually experiencing it, due to the augmented reality not functioning properly on a video recording, it’s still technically impressive and looks as chaotic as a regular game of Mario Kart.

Rather than limit you to one racecourse, you’re taken across several different locations from the games, including underwater tunnels and a creepy mansion, before wrapping things up with Rainbow Road.

What’s admittedly strange, though, is that it had been previously reported that the park’s opening date of February 4 had been delayed after Japan declared a coronavirus-induced state of emergency in Osaka, where Universal Studios Japan is based. Yet, judging by the video, it appears the park opened on time as normal.

Regardless, the footage certainly makes for a compelling advertisement for the park. While there are plans to open similar parks in other locales, such as Florida, this is all looking like a very good excuse to organise a trip to Japan once the pandemic is over.

Khloe Kardashian, Tristan Thompson Are Trying for Baby No. 2