Unlike skateboarding, roller-skating feels short-changed in its digital representation. Aside from Jet Set Radio and Ubisoft’s recent Roller Champions, there’s few examples of the sport in the gaming landscape. It might be an image problem – skating doesn’t have the distinctive culture and household names like Tony Hawk to parade on the box – but given some of the considerably more obscure things other games have been based on, it’s surprising it hasn’t been attempted more often.

If roller-skating is considered somewhat lame next to its edgier skateboarding sibling, OlliOlli World developer Roll7 has given the sport a makeover via Shadow The Hedgehog logic: what about adding guns? Set in a 2030 dystopia, that’s heavily influenced by 1975 film Rollerball (itself a major inspiration for Speedball), Rollerdrome casts you as contestant Kara Hassan in a televised bloodsport where you skate around arenas and take out enemy House Players until you’re the last one standing.

Between the bullet-time slow motion, explosive barrels, and lethal vertical slopes, it’s a far cry from hobbling around in a circle to the sounds of 80s disco.

Rollerdrome makes a great first impression. After a welcoming tutorial, which teaches you the basics of movement, ascending slopes, grinding, dodging, and shooting, you’re thrown into a small arena with a set of dual pistols and plenty of enemies to blast. The core loop is built on executing tricks and well-timed dodges to refill your ammo, so you’re encouraged to seize every ramp and rail to maintain your stock while managing your Reflex Time, which slows down the action so you can unload at enemies before you roll beyond their reach.

As other enemy types are introduced, like heavies who fire homing missiles, snipers, and ones who teleport between laser beam blasts, the dance between ammo management and avoiding chaos feels surprisingly reminiscent of Doom Eternal – if not quite so elegant. There’s some smart choices though, like the inability to actually fall over or fail to land a trick, which ensures the momentum is constant and the focus is always on racking up bullets for the next kill.

The positive first impression carries over to the presentation. Rollerdrome borrows the cel-shaded style of OlliOlli World, but goes for an edgier comic book look. Some of the environments are drab, with colour and vibrancy swapped out for something more industrial to match the dystopian setting, but the character models and weapons look very impressive. The minimalist vision is generally bold and consistent throughout – all the way down to the clean menu interface and excellent dark synth score by Electric Dragon.

Rollerdrome manages to wrap some intriguing context around its world too. As you progress across the 11 stages of the main campaign, structured like a tournament bracket, there’s numerous short, first person segments where you can read documents littered around locker rooms to learn about rivals and the tournament’s purpose.

They add a sense of place to Rollerdrome’s vision of the near future, but it’s disappointing that these segments, and the idea that the tournament is a cover to distract the masses from global events, isn’t explored beyond the surface level. There’s little narrative payoff by the conclusion, or anything worthwhile that’s said, on what’s a relevant and intriguing setup. It’s nice window dressing, but it comes off as hollow and toothless and probably only there because Rollerball did it too.

Generally, Rollerdrome feels like it’s working against its strengths as you progress. As later stages become more hectic with an abundance of enemy types, it becomes more difficult to achieve the fluid flow-state the game strives for. With constantly spawning snipers, enemies who can leave fiery trails on surfaces, and mines and rockets to avoid, the game forces you to constantly dodge incoming fire to the detriment of the skating.

The worst culprit is the constant sniper lock-ons, which often force you to dodge as you approach a jump, which can mess up your run into the slope and send you clumsily barrelling out of bounds. 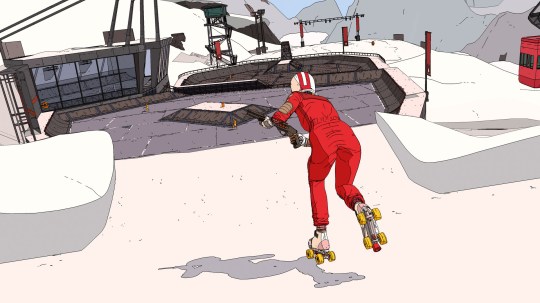 Certain enemy types, like those with the ability to teleport or raise a shield after being shot, can often turn a thrilling combo string into a laborious runaround, as you wait for an opening. This is especially true in later stages when there’s added verticality to contend with. It’s natural for a game to pile on the enemies to raise the stakes, but here it feels like their design detracts from the joys of movement by being a constant interruption.

If you don’t care about posting scores on leaderboards, there are options to alleviate the frustrations. In the settings, there’s various assists to modify the damage Kara takes, trigger invincibility, infinite ammo, infinite reflex time, and alter the game’s speed. Any options to increase accessibility are welcome, but it feels like these might become a bigger crutch than intended to combat the ill-judged difficulty curve.

While Rollerdrome is a flexible package, the game’s mileage will depend on your will to chase high scores and complete each level’s list of challenges – from pulling off tricks at certain areas to grabbing tokens and killing enemies with a specific weapon. The main story can be completed within a couple of hours, which unlocks an additional campaign featuring remixed versions of the same levels with different enemies scattered within them. There’s a decent amount to complete, but the absence of any multiplayer mode does feel like a missed opportunity.

In many ways, Rollerdrome feels like a first draft rather than a finished product. There’s fantastic moments in here, when the pivot between skating and gunplay hits the sweet spot between its abundance of tricks, but equally, there’s plenty of times where the design stumbles over itself and fails to reach its ambitions. Fans of the extreme sports genre will glean some enjoyment, but this template is begging for a fine-tuned sequel to elevate the bloodsport.

In Short: A sleek skating hybrid with plenty of compelling ideas and some stylish presentation, but the longer it goes on the more frustrating it becomes.

Pros: Presentation, including the cel-shaded graphics and soundtrack, is excellent. Mix of gunplay and skating is occasionally thrilling. Near future setting is built on interesting ideas.

Cons: Later stages become too complicated for their own good, with large quantities of oddly designed enemies. Campaign story is a damp squib. No real multiplayer options.

Cricket fielding positions explained – What are the most common and what are they called?

What is the safe way to play online casino poker gambling?