Tropico is a simulation game where you assume the persona of El Presidente, a political leader based in the Caribbean. There are four different eras you operate through, starting with the Colonial Era, then the World Wars, the Cold War Era and, of course, the Modern Era. Each of these time periods come with their own challenges, layering on what came before, as you shape your nation how you see fit. 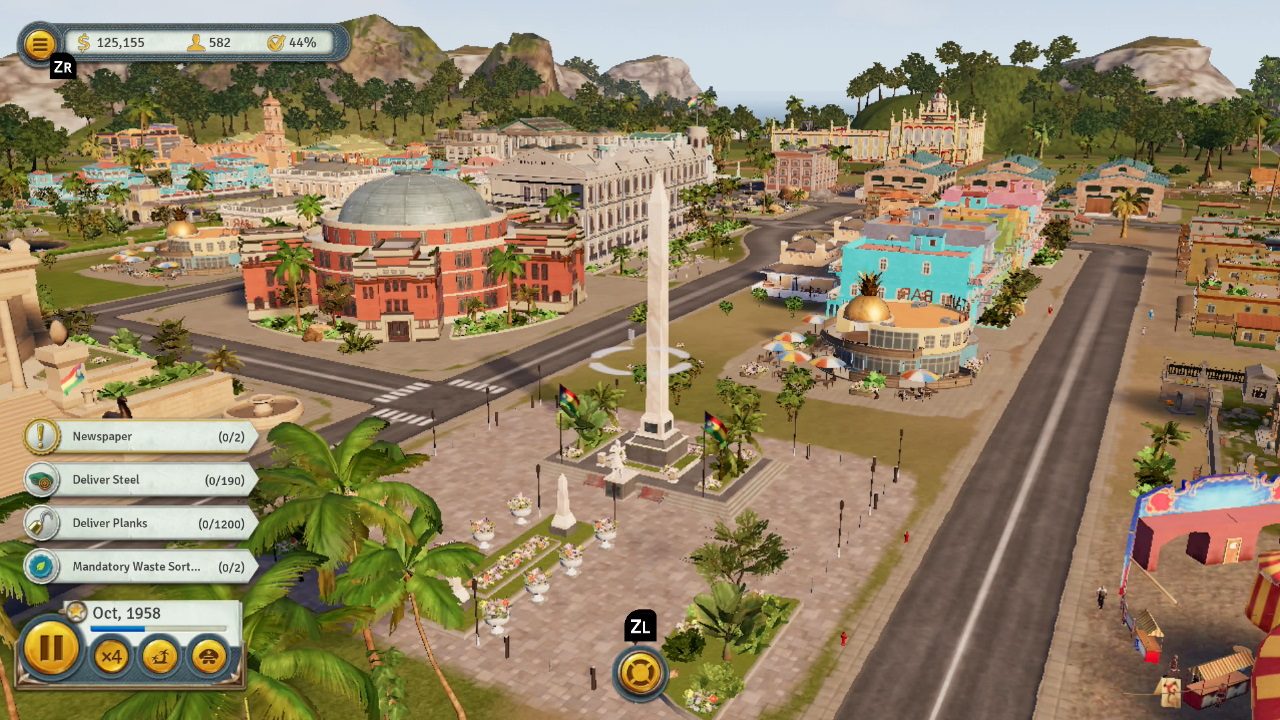 Tropico games are uncharted territory for myself, so what better way to become accustomed to the franchise than with its first entry on Nintendo platforms. My knowledge of the game was very limited. Luckily I knew how broad and in depth Tropico could be, so that didn’t come as a surprise. I was fascinated to see how a franchise like Tropico, traditionally at its best on a PC, would shape up on the Nintendo Switch. The answer is better than I could’ve expected, but still far from perfect.

Most importantly I can’t recommend enough how useful the tutorial is. It may be bordering on egregiously long, and it may feel like a waste of time, but going in with no experience is incredibly daunting and a recipe for failure. It’s not impossible to just go in and wing it, as there is a fair amount of guidance, but the tutorials do go that extra mile to add clarity and even then they don’t go into everything. Tropico is a bit like the old adage about driving: “You don’t really start learning to drive until you have passed your test”. Something I’m sure everyone heard when they were learning, but oddly is very comparable to Tropico. The real learning starts when the tutorial ends. 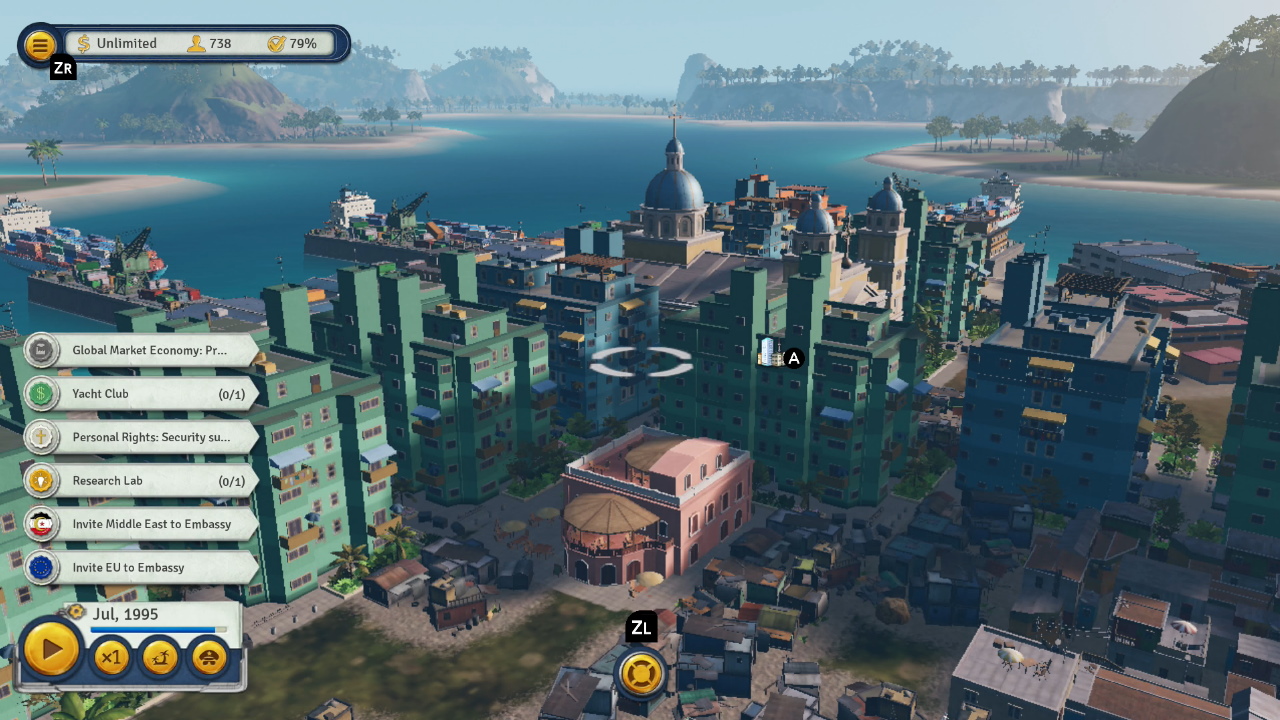 The sandbox mode is completely unguided and up to you. There is a ridiculous amount of options and in turn plenty of depth. It may seem intimidating (it kind of is), but with that many options also comes an incredible amount of opportunities. A sandbox game has almost unlimited potential and if you really get into a particular save, Tropico could quite easily be your go-to game, for a very long time. 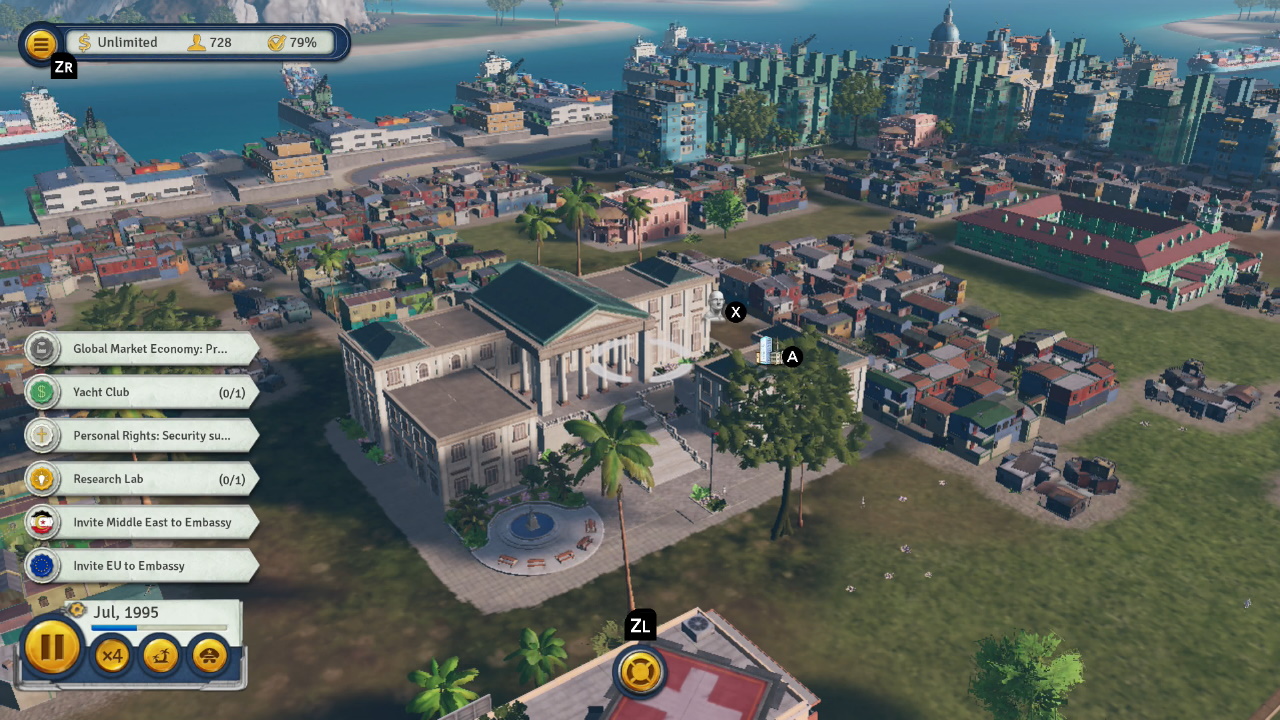 Tropico 6 has obviously had to make some sacrifices in order to run on the Nintendo Switch. None of these are more obvious than the way the game looks, especially when zoomed in closely. Every single detail is blurred or jagged. Luckily, how a game like this looks isn’t necessarily important, but what really matters is how well the controls will translate from a mouse and keyboard. It is not the first time Tropico has appeared on a console so I am sure it’s been refined by now, because the controls are done very well. Sometimes traversing around your islands can be awkward, and I’ve botched more zooms than I’m prepared to admit, but for the most part it’s a great way to experience the game. It never feels too awkward or out of place. It does, however, suffer from the odd frame-rate dip when you move to a new place really quickly.

Tropico 6 is incredibly in depth, at times quite complicated, but satisfying once you really get going and things start to come together. The path to building a superpower is a long and arduous one, which can really feel like a drag, but Tropico is a game best enjoyed at a relaxed pace. The Nintendo Switch may not be the optimum place to experience Tropico 6, but it is still a good enough port to make it worth your time.

Balan Wonderworld hands-on preview – the shadow of Sonic the Hedgehog