I shouldn’t have to tell you from where Castle Kong draws its inspiration. It’s right there in the name, and any of these screen captures should tip you off, too. Castle Kong is such a faithful homage to Donkey Kong that you may be wondering whether there’s even a point.

This likely occurred to developer Drowning Monkeys Games, too, as they’re staging a tournament in which gamers can play for actual monetary prizes. Post one of the highest score through May 25th, 2021, and you can win up to $1,250.

I’ll tell you now, though, that this won’t be easy. Castle Kong may look and play like Donkey Kong, but it’s not as easty-going as its predecessor. Although the game offers only 22 levels across four stages, I had to play it five times before I was able to reach the second. 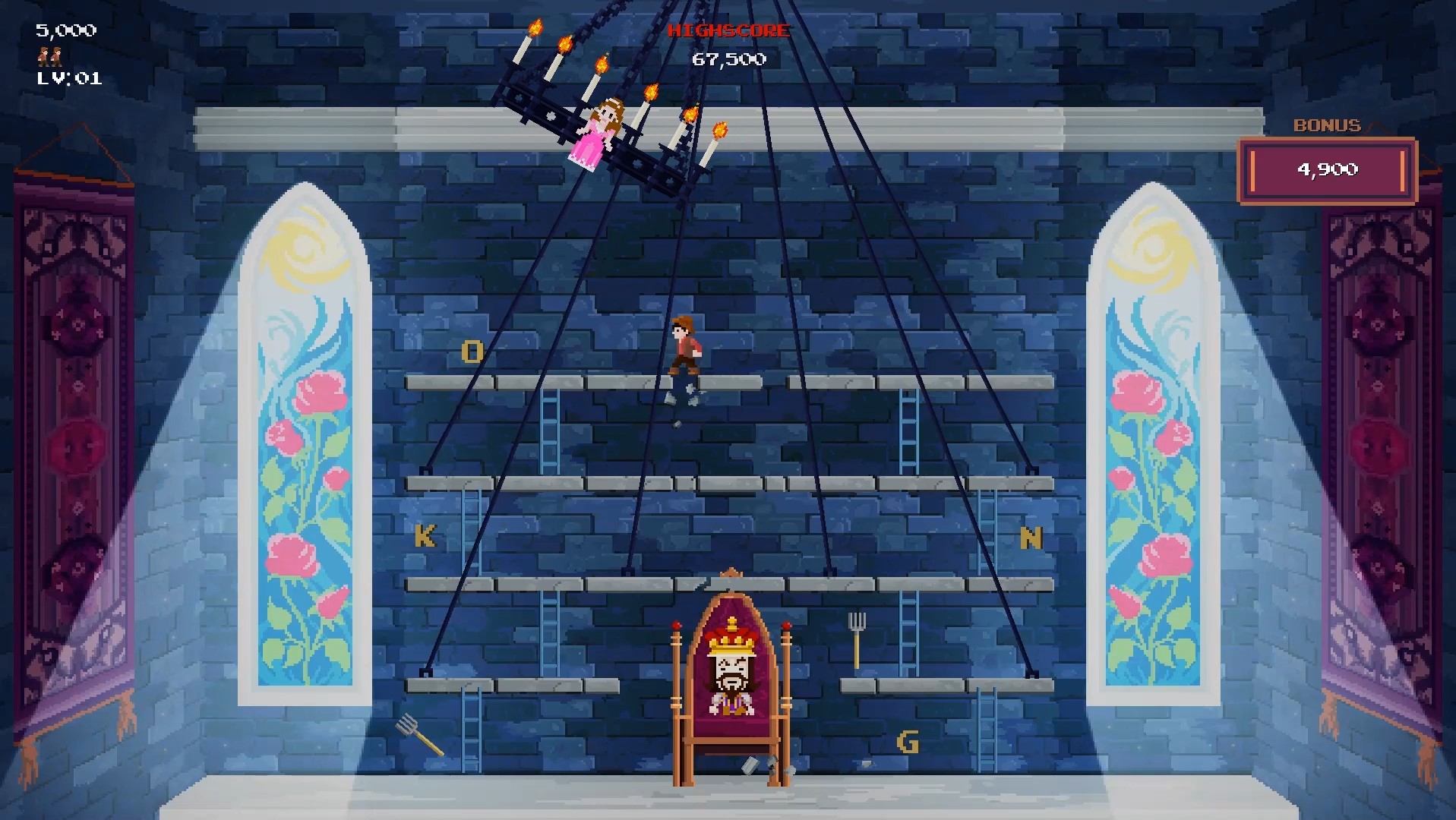 The difficulty is, however, by design. You start tCastle Kong with three lives, and that’s all you get. There are also no save points; when your lives are gone, it’s back to the beginning. Thankfully, it’s a pretty fun process.

The familiar premise here is that BaronMan has kidnapped PrincessGirl into his castle. As PauperBoy, it’s for some reason up to you to save her (the princess has no army?). You’ll do so while storming up and into the castle while BaronMan and his soldiers rain fire, arrows, and pies and chickens(?) down upon you. 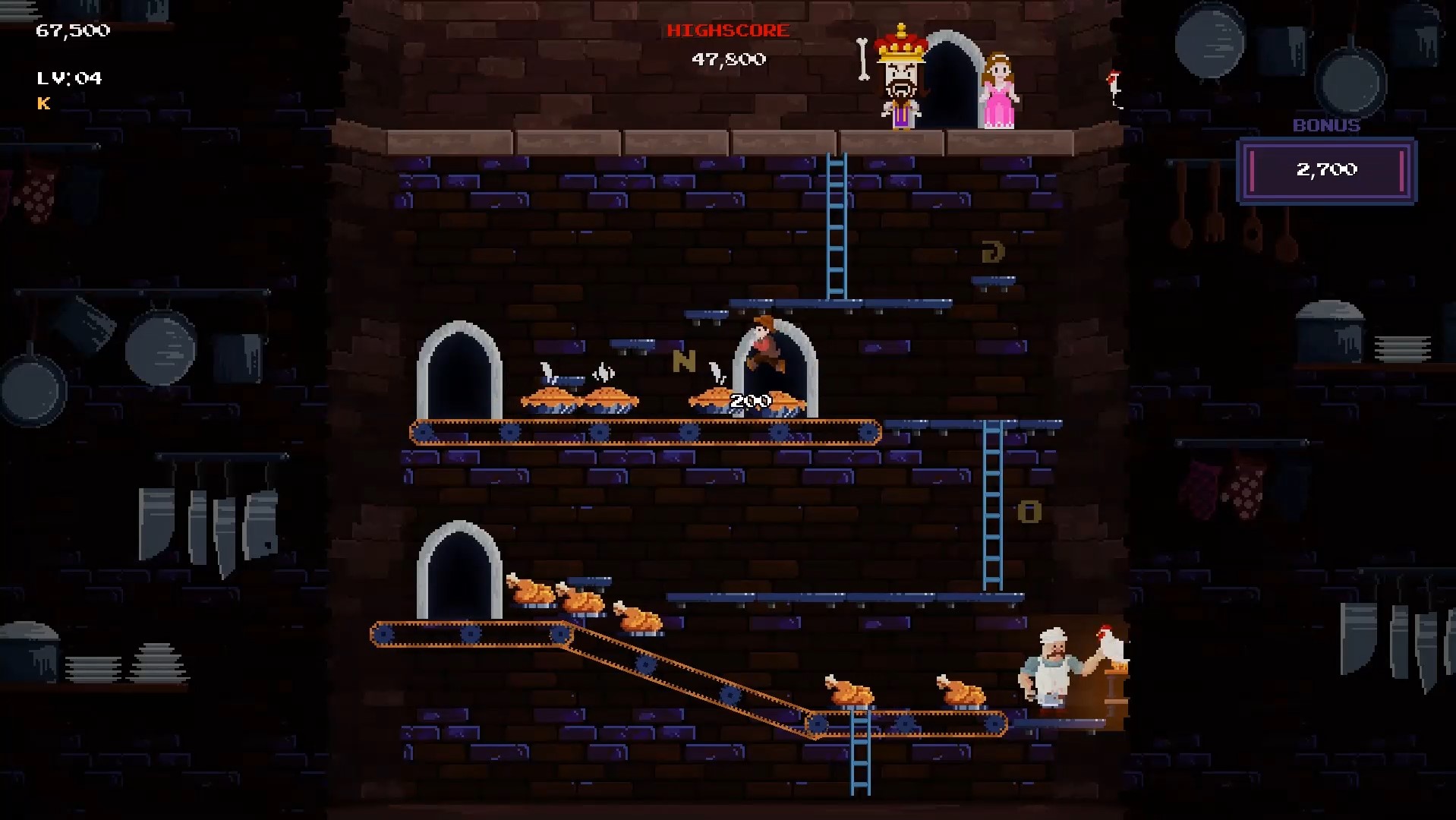 PauperBoy utilizes ladders and platforms to reach BaronMan and proceed to the next level. He’s is able to defend himself from some obstacles with a pitchfork, much like Mario’s hammer. In a strong argument for evolution, PauperBoy has figured out how to carry his weapon up and down ladders. He can’t use it while climbing, and it’s still time-limited, but he’s at least not stuck on his current level until the pitchfork disappears.

He can also collect some point-value bonuses on his way to reaching/saving PrincessGirl. These aren’t necessary, but they’re the secondary point of the whole process. Castle Kong challenges you to play 22 exceptionally challenging levels with only three lives at your disposal. Once you’ve completed that task and reached the kill screen, your new goal will be to do this with the most points possible. You get those by completing each level quickly to preserve your countdown bonus and by collecting the K-O-N-G letters spread across each level. For the sake of this review, I had to quickly abandon hope of grabbing them all in order to proceed.

Thankfully, the controls in the game don’t get in the way. You can only move and jump, but the action feels spritely despite sticking to the feel of the original Donkey Kong. Compare this to the Arcade Archives Donkey Kong for the Switch, where the sluggish controls often caused me to die when Mario wouldn’t get on/off a ladder quickly enough.

Trudging through all 22 levels can be a chore when there are only four screens to look at, but they at least look pretty good. Donkey Kong’s flat black background has been replaced by colorful screens that offer plenty of texture and life while adhering to the ’80s arcade aesthetic that inspired them. 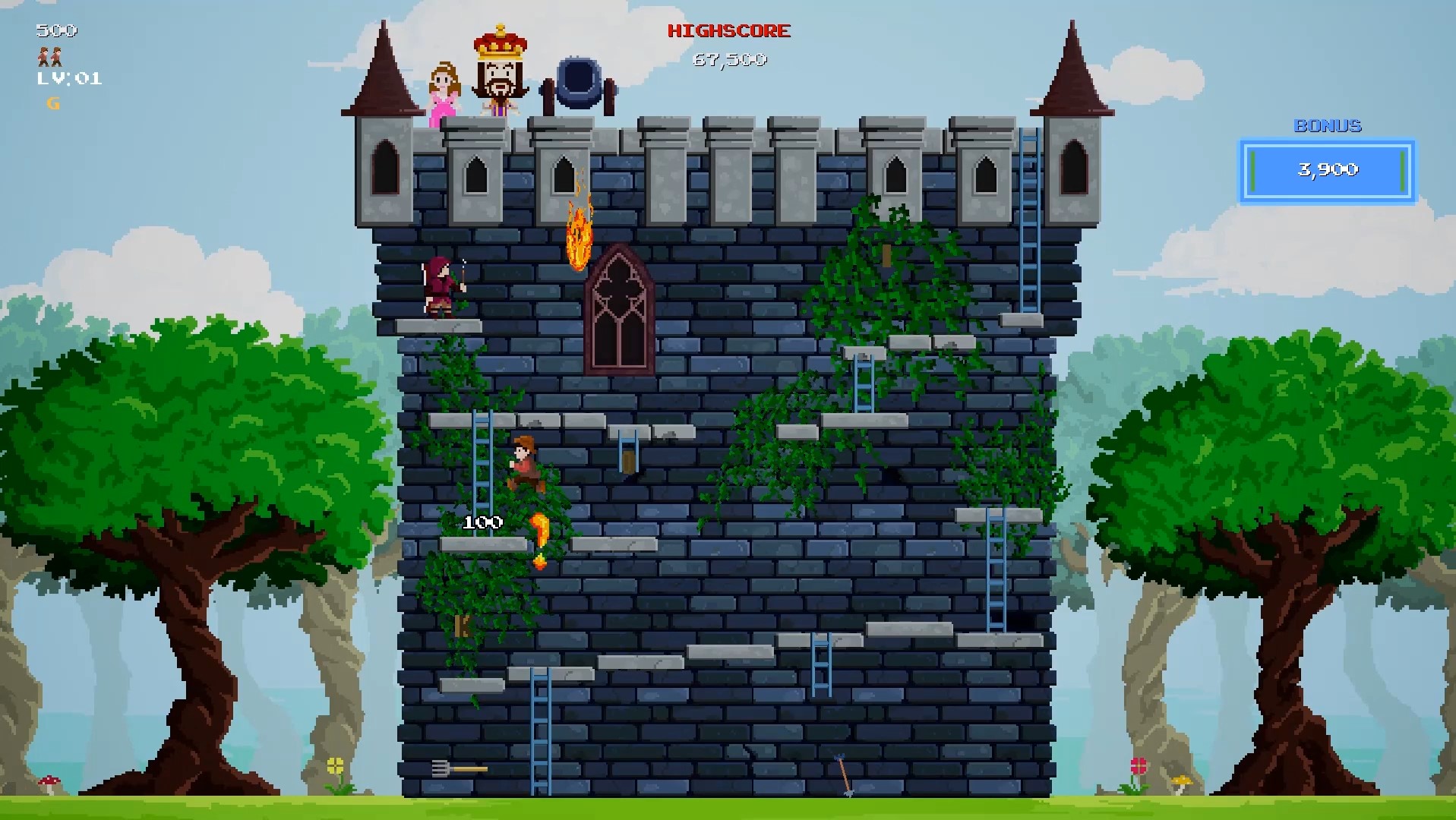 Also, arcade aficionados will be pleased to know they can hold their Switch vertically in handheld mode to better capture that arcade cabinet feel.

All of these elements come together to make Castle Kong a fun, faithful throwback to one of the greatest arcade games of all time. It changes up the gameplay just enough to make it a worthwhile purchase even if you still regularly play Donkey Kong. And who knows? Get it quickly enough, and maybe you’ll make a few hundred bucks off it, too.