It’s hard to make a good hockey game. That may be true of all sports sims (other than golf), but I’m confident in this assertion because hockey sims are the ones I actually play—everything from Super Pro Hockey on the Intellivision to Stinger Table Hockey on the iPad to NHL 22 on my kids’ PS4.

The question with most is whether to go for easily accessible, action-oriented arcade gameplay or to use an intricate control system that more accurately recreates the diverse skill sets of professional hockey players.

Bush Hockey League does a bit of both, which isn’t uncommon. The game provides three control schemes for offensive and defensive plays, allowing you to instantly jump into the game while giving room for growth as you learn its nuances. Unfortunately, there are problems that surface regardless of which method you use.

Before we get to that, though, there are some things Bush Hockey League does right. As is implied by the title, there’s nothing glitzy about this game. It’s meant to look and feel almost illegal, which ’70s-era minor league hockey maybe should’ve been. The arenas are small. The fictional team names are more about civic pride than merchandising. The players don’t wear helmets. The flights are plentiful.

Dedication to the era goes even deeper, as the game is designed to look almost like you’re watching it on your grandparents’ (or, in my case, parents’) TV. Even better, the intro video is set to Stompin’ Tom Conner’s “The Hockey Song,” which is behind only John Fogerty’s “Centerfield” and Kurtis Blow’s “Basketball” as the best sports song ever written (assuming we’re not including Queen’s “The Football Fight” in this conversation).

If only this dedication to the aesthetic carried over to the actual gameplay. There’s an exhibition mode that allows you to get straight into the action after a tutorial gives you the basics of the full arsenal of hockey moves at your disposal. Switching to a different control scheme removes some of these moves, as the more control you want, the more complicated the button inputs. Unfortunately, the player AI in the game is “What the hell are you doing?” dumb, so you’ll want as much control as you can get (or a second player local co-op play). And no matter which method you use, the action feels somewhat clunky and inaccurate. 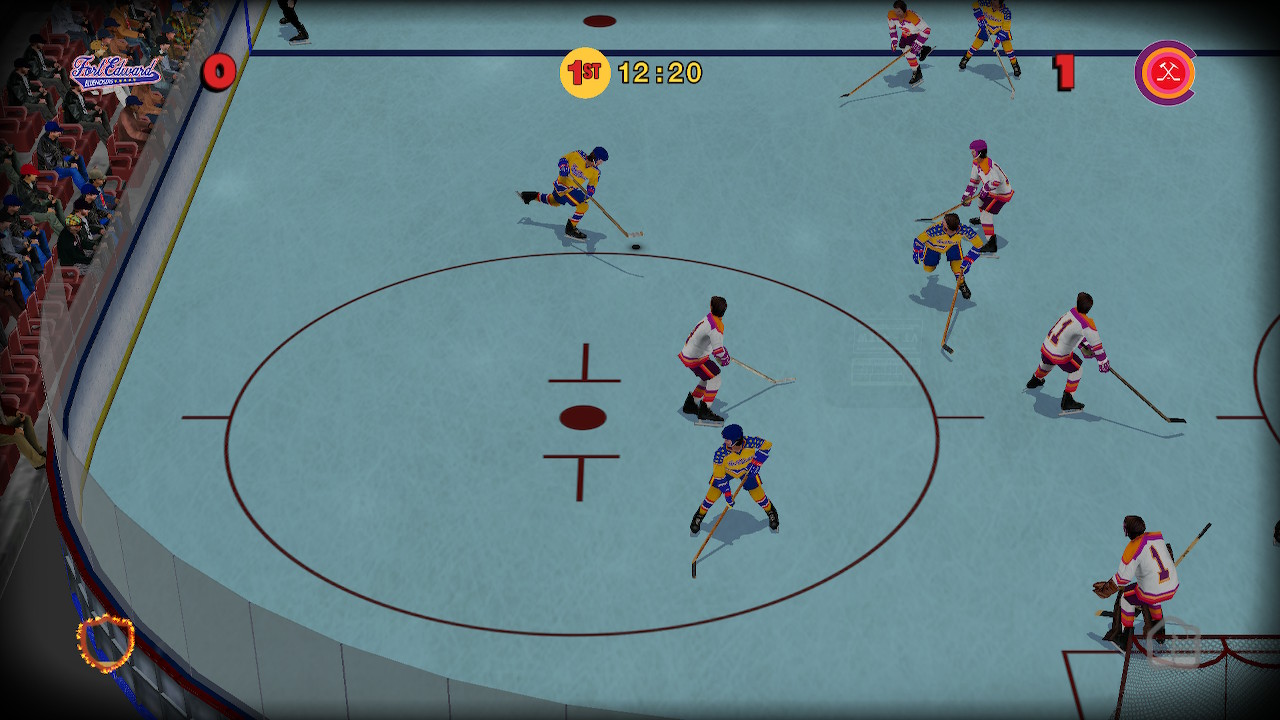 The goaltending AI is equally awful. In my first game, the opponent scored on its first three shots on goal. When shots are blocked, the goalie had a tendency to release the puck righ back to the opposing team’s players. How is a newbie supposed to be competitive? Is that the point? It is in story mode, where the goal is to save a fledgling franchise by taking it to the championship. Your team is terrible at the start, with no statistical chance of winning; your players don’t have the skills the opposing teams’ players do. It’s up to you to obtain these skills by completing certain objectives during the games. In theory, I think this is fantastic. You’re not expected to win; you’re expected to get better. This is a good way to get you used to the system and improve your knowledge of the game (even if your AI teammates’ hockey sense never really advances beyond milling about.

However, the objectives are often frustrating to complete for technical reasons. For example, it’s hard enough to score goals, and being assigned specific spots from which to score is even harder. But add in the game’s pickiness for precise player placement, and it may take you many games to finally complete an objective. This makes the game tedious, which hockey most definitely is not.

With the name “Bush League,” you can also expect fights. They’re very much a part of this game, with specific methods for instigating them. I enjoy a good hockey fight more so these days where the players are so heavily padded that it’s almost impossible to do any damage. They were more brutal during this game’s helmetless era, of course, so it’s a bit surprising that the fighting mechanics are a bit dull. There’s not much finesse to them. However, you’ll want to get good at it because fights can injure players and remove them from the game. 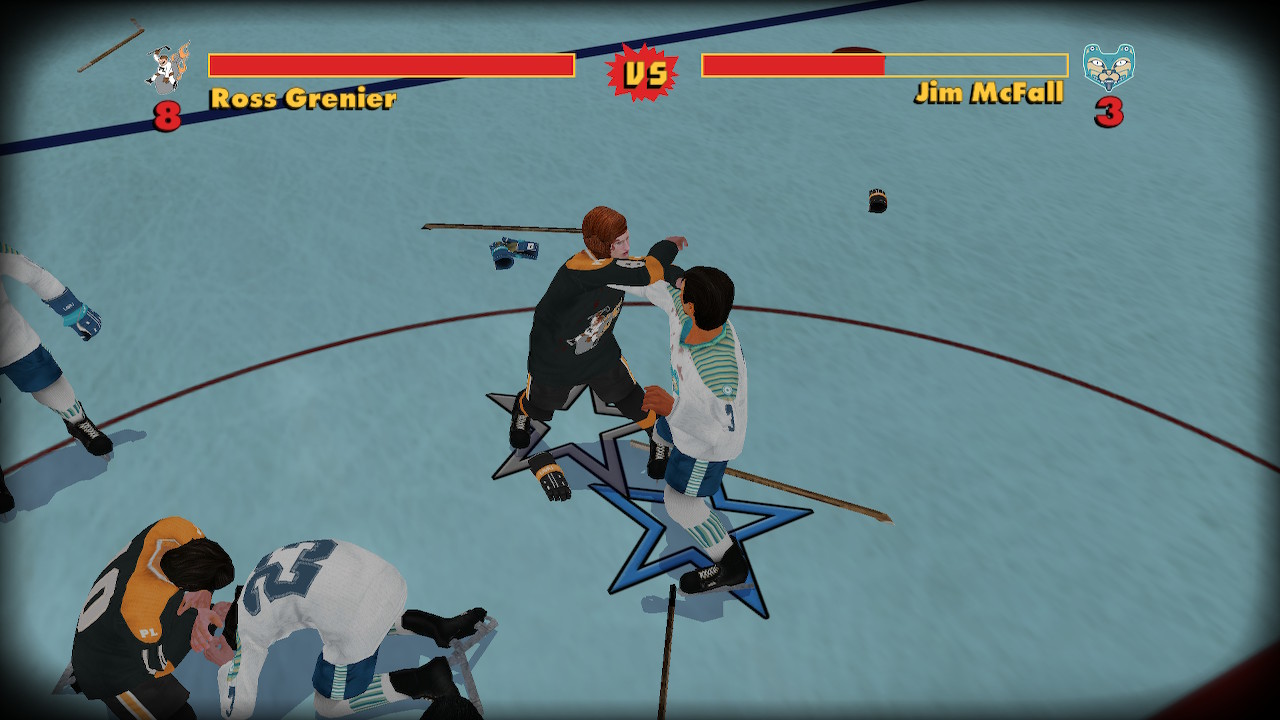 Speaking of that, all players have varying strengths and weaknesses that are affected by ice time. You’ll need to rotate your lines in order to keep everyone fresh. Your strongest goon won’t win fights and your top shooter won’t score goals if they’re tired. But again, is this too much to manage in a game that’s supposed to be more about the action than the simulation?

Finally, there’s a definite problem with load times. Games take well over a minute to start up, which is more than enough time to kill the excitement of a gaming party. It’s unfortunate, because Bush Hockey League allows for up to four players in local mode (no online multiplayer). There’s definitely some fun to have if you can get three friends up to speed on the control scheme. Making them wait so long to get into a game is therefore a problem I hope the developers can correct with a future update.

If you’re a hockey fan who laments the lack of a Switch-compatible sim, Bush Hockey League may satisfy that need. The action isn’t all that great, but what do you expect? These are the minors. Regardless of whether it’s intentional, the gameplay and appearance are more about the attitude than the quality of play. Accept that, and you can have a fun Hockey Night in (or out of) Canada. If you prefer more polish and shine, you’ll need to keep on waiting.