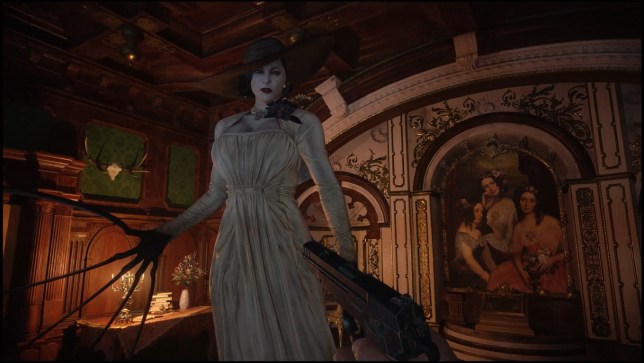 GameCentral gets to watch more than an hour of Resident Evil Village in action, including werewolf combat and more of Lady Dimitrescu.

When Resident Evil Village is released in a couple of weeks’ time it will be almost the first major multiformat release of the year. As the pandemic’s delayed effect on the video games industry becomes more obvious, a launch of this size may remain a novelty for several months, or even years, which puts even more pressure than usual on those games that do make it this far.

On paper, Capcom has shown quite a bit of Resident Evil Village so far, with several trailers, the Maiden demo in January, and the playable demo that, if you’re a PlayStation owner, you were able to download last weekend. At the same time though we’ve also been given just over an hour’s worth of hands-off footage to watch – the sort of thing we’d normally see if physical press events were still a thing – which shows yet another side to the game.

Strangely, the PlayStation 5 demo from the weekend featured almost more cut scenes than gameplay, whereas the hands-off footage was the opposite. It was composed of multiple gameplay snippets but they seemed to be in chronological order, starting off very near the start of the game, with Ethan Winters waking up bewildered in the snow, and charting his/your exploration of the titular village and the castle of Lady Dimitrescu.

Village is essentially Resident Evil 8, so the basics of the gameplay, including the first person view, are very similar to Resident Evil 7. Although what’s obvious from the footage, and the playable demo, is that the graphics are a noticeable step up. The gameplay has been recorded on a PlayStation 5, so not even a PC, and yet it looks fantastically real, with some great night scenes that show of the lighting and weather effects perfectly.

Human characters look impressively realistic and yet the game seems able to feature several characters on screen at once, even during combat. Things start off slow though, with Ethan unarmed and creeping around the village looking for some kind of weapon. It’s hard to be scared by a game by just watching someone else play it, which is probably why survival horrors are never very popular on Twitch et al., but you can still sense the tension, given the excellent graphics and sound design.

What exactly is going on in terms of the story remains tantalisingly obscure, with no mention of Umbrella or any kind of science fiction elements in anything we saw. And rather than the story involving vampires vs. werewolves it seems both are on the same side, with the head of the werewolves being Lady Dimitrescu’s younger brother. She doesn’t seem to get on with him that well but in one sequence both meet up with the mysterious Mother Miranda, to discuss what to do with Ethan.

For the sake of spoilers, we’re not going to discuss what Mother Miranda looked like, although we very much assume that what we saw was not her final form. She does once again imply a supernatural origin for what’s going on though, as much as we assume that’s some kind of red herring. Although at one point the villagers start chanting a prayer to the ‘great ones’ and talking about ‘endless dark’, suggesting some kind of Lovecraftian influence – and certainly there is a hint of Bloodborne about the setting.

A far bigger influence though is Resident Evil 4, from the basic set-up to details like an enemy attack being interrupted by a church bell that calls everyone away. Impromptu sieges also appear to be a part of the game, with the ability to move furniture and barricade doors and windows, which should be especially harrowing given the limited ammunition that you have to craft yourself.

There’s also a highly suspicious merchant that always seems to be one step ahead of you and has little catchphrases as you buy items and upgrade your weapons – although again, he’s not nearly silly enough to be as funny as the old one. 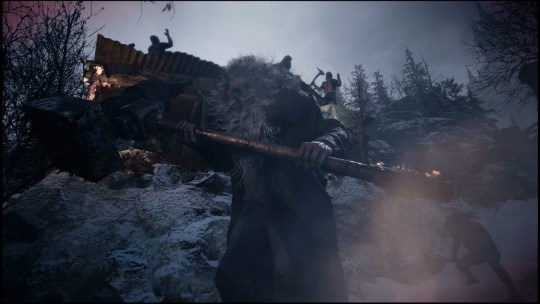 The first person combat is largely the same as the last game, with werewolves appearing to be the most common kind of enemies – although they come in many varieties, most wielding some kind of melee weapon. You can block their attacks and also push them back, but they tend to attack in packs so the game encourages you to use stealth and take them out one by one.

There are also bat-like creatures once you get to the castle and some kind of hooded enemy, with a hunchback and creepy doll appearing during one cut scene – and we suspect likely to return as boss enemies. The footage also seems to confirm that Lady Dimitrescu is the equivalent of Mr X or Nemesis, in that she’s constantly stalking you through the castle and can appear suddenly at any time but can never be defeated completely.

We also got to see a number of puzzles, which in true Resident Evil fashion make no sense and are hilariously impractical – just how fans like them. The question we keep returning to though, is something we’ve been concerned about ever since Capcom started remaking the older games: the lack of cheese. Resident Evil 2 had it, at least to some degree, but it also tried to take itself more seriously as well. Resident Evil 3 though was devoid of any real humour, intentional or otherwise, and, so, amongst its other flaws, ended up lacking any real personality.

Village is certainly an improvement on that, thanks to over-the-top characters like Lady Dimitrescu and her daughters, but there’s nothing that seems actively funny so far. The dialogue is still bad at times, ‘Why does everyone keep dying on me?’ ponders Ethan at one point, after a woman falls to a horrific death, but the delivery of the statement is entirely lactose-free and that seems a shame given the impossibility of taking the game’s plot seriously.

That really is the only flaw we can suggest at this point though and given the pedigree of the last few games (Resident Evil 3 was mostly developed by a separate studio) we’ve full confidence that Resident Evil Village will be a lot of fun. Whether it’ll be a classic for the franchise, or genre, we couldn’t say, but we certainly wouldn’t rule anything out at this point.