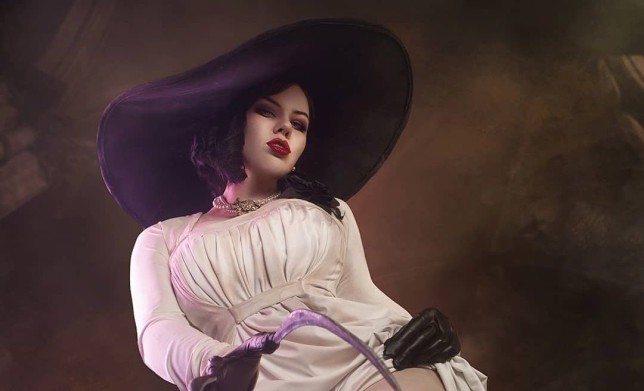 Is there a Mr. Dimitrescu? (Pic: Capcom)

The tall, vampire lady from Resident Evil Village took the Internet by storm, so of course people have started dressing up as her.

There are plenty of reasons why fans are excited for the release of Resident Evil Village. The creepy atmosphere, the return of Resident Evil 4’s inventory management system, the apparent move to supernatural horror… butt perhaps the most popular reason is the inclusion of Lady Dimitrescu.

While there’s still a lot of mysteries surrounding her (like, if she actually is a vampire), her brief appearances in the trailers and the PlayStation 5 exclusive Maiden demo have won her a lot of fans.

The internet is already drowning in fan art (maybe make sure Google SafeSearch is on if you’re curious. Or don’t, no judgement), so it’s not surprising to see cosplay attempts as well.

One alice_with_cats on Instagram has recently shared images of her take and, quite frankly, it’s very impressive. The dress, the hat, the jewellery, even the black corsage is a near one-to-one replica of her appearance in the game. She’s even managed to replicate the vicious claws Dimitrescu reveals at the end of the demo.

To help highlight Dimitrescu’s most defining feature, her height (Capcom even confirmed she’s over nine feet tall), alice_with_cats made a point of taking low angle shots, though there a few close-ups as well, with what is meant to be dried blood dripping from her lips.

Although it’s not confirmed yet, many assume Countess Dimitrescu will stalk players throughout her castle home, similar to Resident Evil 2’s Mr. X and Resident Evil 3’s Nemesis. In fact, given her height, one fan theory is that she is a Tyrant, much like those two.

Since Mr. X and Nemesis are intelligent but brutish monsters with very limited speech (Mr. X doesn’t talk at all), it could mean she’s an especially advanced Tyrant.

Or perhaps she is an actual vampire and Resident Evil Village is an attempt to move the series more towards supernatural horror, leaving behind the biologically engineered monsters and lab experiments. That seems to be what Capcom want you to think at this stage but it could well be that that’s deliberate misdirection on their part.

Resident Evil Village will release for PlayStation 5, PlayStation 4, Xbox Series X/S, Xbox One, and PC on May 7.